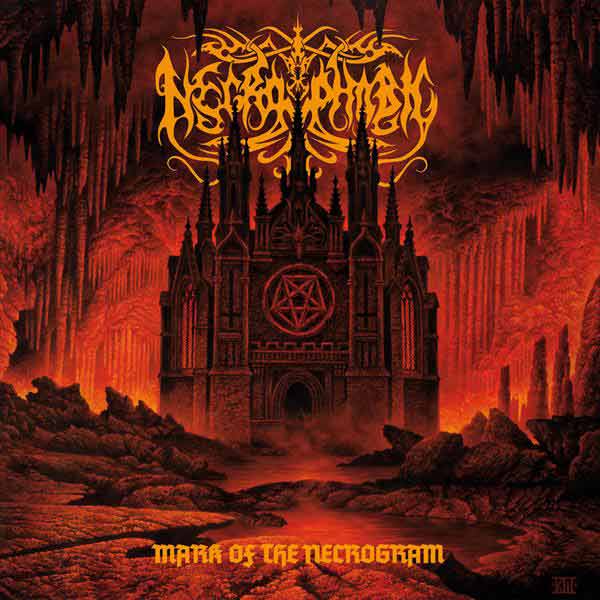 Lately we have had several very entertaining black and/or death metal acts reviewed on this site that were heavy and enjoyable for many different reasons. And today, we look at yet another Swedish band that is still on the path to destruction within their thirty year legacy. Necrophobic is a Stockholm-based outfit with a long history and a sound that blends elements of both the blackened and the death (metal). Since the late 1980s, the band has successfully released a total of eight albums...with today's offering being their eight and latest full length. Without further ado, let's see what it has to offer.

Mark of the Necrogram serves as Necrophobic's newest full length album released recently under the Century Media Records label. This release features the five piece including founding member Joakim Sterner on drums once again, two guitarists and a backing vocalist in addition to the main vocals. Mark of the Necrogram also clocks in at a formidable 48 minutes in length and has ten distinct musical tracks to offer us listeners. The album additionally features your typical black and death metal themes of anti-religion, death, the macabre and such, which is no suprise and something we're used to at this point.

First thing I noticed that grabbed my attention was the familiar production quality, which borders on the oldschool death metal influence. The sound quality is nostalgic at times, but it is still modern enough for pretty much every note, intonation, chord and sample to be perfectly audible. Next up, the guitars are about top-tier for the likes of Necrophobic. With a metric ton of eclectic riff styles ranging from tremolos to fast paced galloping, melodic strumming to power chords and more, these guitarists are definitely on point here. The tone of the riffage is clear as hell, too...with some solos demonstrated throughout, though the guitar solos in earlier tracks such as "Odium Caecum" and such stand out most. The drummer is always keeping up with those blast beats and the vocals are as extreme as it gets when you mix two heavy metal subgenres together. A lot of them are rather on the high-pitched, blackened side however. Finally, the "Tsar Bomba" track is a standout due to its transitions, melodies and more, making it out to be my fave of the album.

A few personal qualms I have with this album involve the vocals a bit as well as the placement of melodic sections, which could've been changed slightly in certain parts. The vocals are very good for what they offer, but I just wish there was a little bit more to them, perhaps some more lows or such.

Despite the little faults that it has, Mark of the Necrogram is a modern blackened OSDM album with a lot to offer if you're a fan of those subsects of extreme metal. For an eight album it is rock solid with its overwhelmingly fast paced riffs and songs, destructively enjoyable atmosphere, and powerful musicianship. Definitely give it a listen if you have the time, because this longwinded heavy metal outfit is still kicking.

For Fans Of: Dissection, At The Gates, Grave