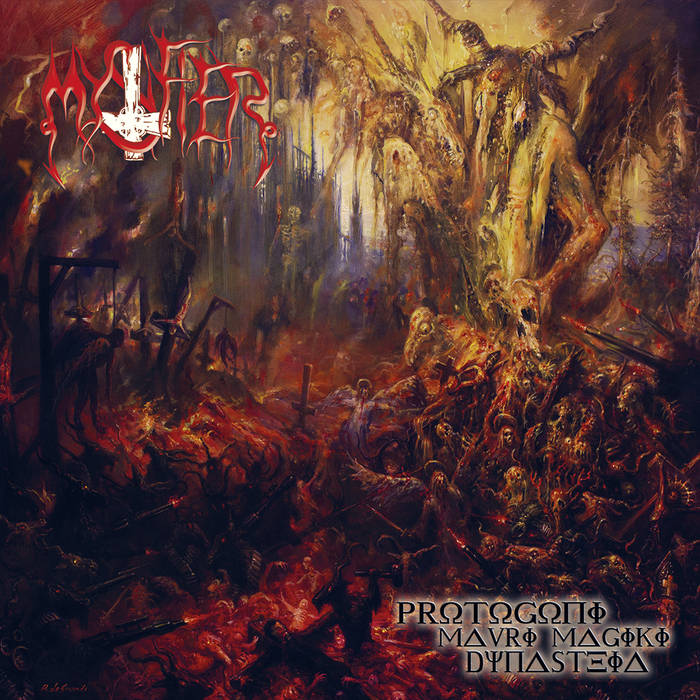 A sprawlingly hectic and dark journey into blackened territory once more

Mystifier stands as one of those notably inspired and longwinded black metal artists that've been rocking it for a few decades now. Formed in Brazil in the late 1980s, these South American slayers have thus far released several full lengths, even more EPs & demos, and have paid tribute to a few bands (one of those most notably being German thrashers Kreator). But today, the newly reformed outfit's banded together once more for the anticipated unveiling of their latest full length album. Time to see what all the fuss is truly about...

Released just now via the French Season of Mist Underground Activists record label (being the sister label of Season of Mist), Protogoni Mavri Magiki Dynasteia is the new full length by Mystifier that features ten sprawling tracks culminating into about fifty or so minutes of blackened death extreme content. This new album is largely available on vinyl format and also includes guest vocals courtesy of ex-Absu and former Rotting Christ members in its opening track. Also, the cover artwork was done courtesy of Paolo Girardi, who's worked with other extreme metal artists such as Artificial Brain in the past.

It all begins with some fairly haunting echoes that take hold and lead into a bassline and epic drumming to top off the intro track. The interesting mix of clean/spoken vocals and unclean growls and black metal highs becomes apparent very early on and soon becomes a staple of the album's sound. The opening song especially has that oldschool nostalgic vibe combined with all the different vocals and guitar lines. The atmosphere throughout is stunningly emotional and pulls you in. Sometimes the music will go into a guitar solo section or more death metal-esque sound; however, the focal point is the blackened aesthetic of Mystifier.

Much of the instrumentals are well written and done in a way to create buildup. For instance, 'Weighing Heart Ceremony' has a nice bass intro that sets up the scene for incoming blast beats and black metal shrieks later on. And, as soon as those tremolo picking guitars join in, it becomes apparent what you're in for. 'Weighing Heart Ceremony' is also a personal fave for its midway transition into clean vocals, solo guitar riffs and overall feel. Another one I have to mention is 'Thanatopraxy', which has decent flow and clean acoustic riffs. It's a song that focuses more on a thrashy instrumental vibe as opposed to the rest, and for that reason it's a standout track.

Sometimes there'll be ambiance or background audio to accompany the madness, such as in a few of the earlier songs on this record. In many other albums these feel forced. However, they really do work in this case and don't take away too much from the actual music. Also, 'Akhenation' is a track worth mentioning for its awesome guitar solo alone. And, overall, I'd say that pretty much every song on this album had something I enjoyed or kept my attention.

Mystifier's latest release marks a milestone as well as a solid return to the light for this hectic black metal band. The sprawling and dark journey that awaits listeners ahead once again dives deep into some dreary, blackened territory; albeit with some innovative nuances, substantial vocal variety, and certain instrumental sections that you wouldn't normally expect in an album of this calibre. For all its perks, unique qualities and other things that set it apart from the rest, this new full length is surely one all fanatics of the blackened and underground subgenres of metal music should check out...especially if they want something novel and slightly different out of their listening experience.