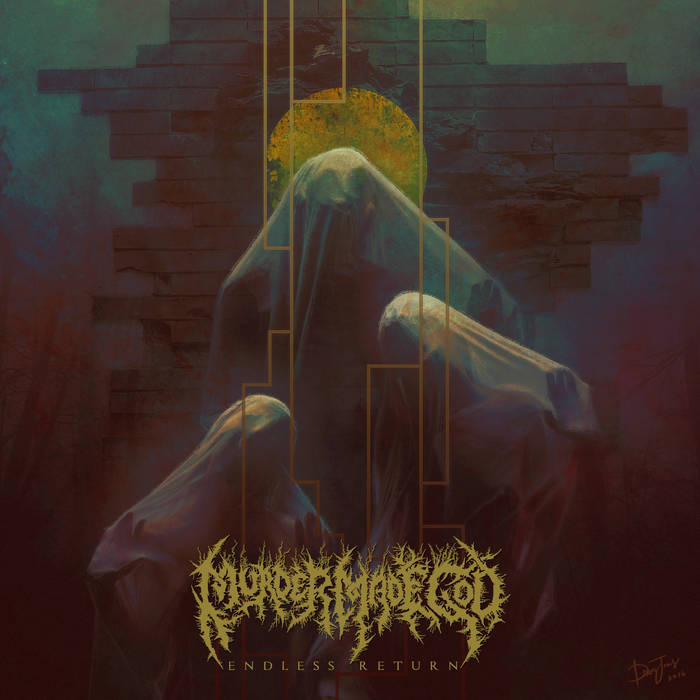 Endless Return
by Murder Made God

There have already been a few Greek bands covered on the site, many of which were, for the most part, extreme metal in the vein of the blackened death variety (i.e. think Septicflesh/Rotting Christ-esque, which in turn seems to be a running pattern). Better for me though, as I've taken a liking to the more technical and darker parts of death metal in the past few years...but, I digress. Murder Made God is one of those bands that made me truly appreciate the scene's inner sound for what it is. Bred in the capital of Central Macedonia, Greece in the early 2010s, this Mediterranean four-piece motley crue of metallers have thus far released three full albums since their inception, and with no signs of stopping or slowing down! And now, three years later following their sophomore effort, a follow-up is now upon us all.

Today's focus release being the band's third chronological full-length offering and one that is out now through the always consistent and brutally heavy, yet welcoming Unique Leader Records, Endless Return is an album that makes listeners look and hear past its rather nonsensically comical name (is it just one return that never ends or multiple returns that are all endless? we may never truly know), though that could be a result of mistranslation. The ten track compilation of dark, foreboding vibes, technical instrumentations and destructive vocals consists of nearly 40 minutes of some of the most ridiculously over-the-top brutal tech death that've graced my ears; and perhaps yours, as well. It's one hell of a bumpy ride, so grab a drink/snack and sit back cause we're in for a doozy.

This brutal rollercoaster ride of death begins with 'Alive': a rather fitting, but smooth ride to one hectic journey of a record. There's some odes of techy deathgrind in the vein of stuff like Cephalic Carnage/War From A Harlot's Mouth as far as the chaotic structures and open note riff breakdown passages go, respectively. Though, in certain parts, there is a sound that borders on the mathcore or other material akin to Psycroptic. 'Alive' stands on its own two feet as more of the technical modern death metal sound that's kinda similar to the latest Humanity's Last Breath release; while other songs like 'World Defect' represent a polyrhythmic, instrumental-focused sound that puts vocals on the backburner and reminded me of borderline Meshuggah material.

There's arguably a melodic backdrop to all of this, as well. The Goerge Kollias-esque drumming is consistent and sublime...which works in juxtaposition to the half-hardcore/crossover, half-OSDM vocals in the forefront. 'Darkness Thy Gift' was a bit too conform in sound for my liking; however, following tracks such as 'Trial and Enemies' really caught my attention due to the over-the-top guitarwork mixed in with the subtle core aspects. 'Cognitive Dissonance' is yet another song that stood out to me mainly for its vibrant intro and open-note breakdowns combined with background melodies. 'The Sword' kinda did the same, though it felt like a more thrashy sound overall and the outro track is as close to corekid, polyrhythm Car Bomb-esque city that it gets on here. The other tracks not mentioned here were just kinda there, though I do encourage audiences to check them out too all the same.

Murder Made God is, in short, an outfit that comes off as something truly wicked and thought-provoking both in lyrics and notes alike. The edginess here lives up to the name, and this deliciously techy and delightfully dark atmospheric, yet at the same time brutal, death metal release is one that may sure enough stick with me and grow to become a part of my regular listenings over time. I wasn't sure about it at first, but now after hearing the album a few times, especially in its most intimate and intricate moments (breakdowns, choruses and whatnot), it is one that I can easily get behind and recommend to a fellow friend who happens to be a fan of the more technical and/or blackened side of the genre.

Fave Tracks: 'Cognitive Dissonance', 'The Sword', 'Gates of No Return'