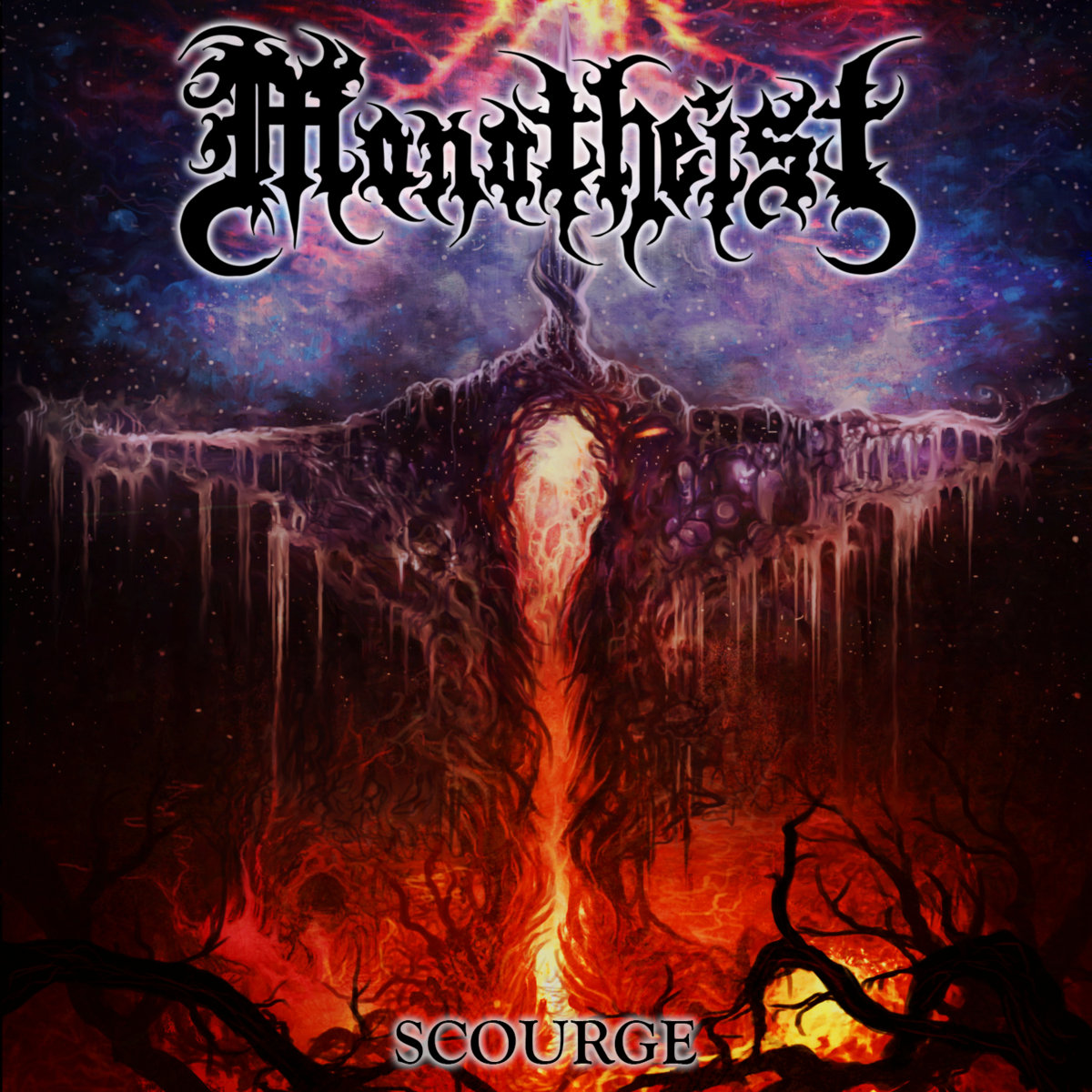 The US state of Florida has proven itself to possess a rather formidable and eclectic outlet for some of the most destructively talented extreme metal bands in recent memory. From longtime metalcore performers Underoath to recent downtempo act Traitors, the blackened Deicide to Cynic and more; there's something for everyone in the ole "sunshine state." Today's band, Monotheist,is a progressive death metal outfit from Orlando that has just released its debut full length album...so let's talk about it. We've already reviewed Rivers of Nihil recently, so let's get down to another prog-deathsterpiece.

Monotheist's first record titled Scourge blends several types of sounds and instruments in its approximately one hour-long duration. The release's eight songs all possess their own style and vibes. The unorthodox structuring and prog influences in the vein of Opeth mix with death metal a la Suffocation, Nile and co. Furthermore, the inclusion of blackened and atmospheric ventures gives this one its own identity. Unveiled in mid-March 2018 via Prosthetic Records, Scourge demonstrates the various talents of the five piece Monotheist as well as a host of several other special guests who provide additional instrumentals or vocals.

The album gets off to a fantastic start with the fast paced riffing, double bass drumming and engaging vocals of "The Grey King". You may notice that vocal duties are shared between band members, which is not something you see/hear too often in this type of music. The track progresses along with some some serious technical savviness. Then, all of a sidden, it shifts into brutal death territory complete with slamming, squeals, and low gutturals. To top it off, the song closes with a melodic outro that includes some guitar solo action. All of this is just in the first track folks, and there is plenty more of it to be found within.

Every subsequent track has its own vibrant, yet dreary aura surrounding the composition. The guitar work is as eclectic as it gets for death metal, and everything sounds clear and well produced. Drumming samples are consistent all the way through and nothing gets in the way of anything else. Even the basslines get prominent at times. The song structures, which largely feature sporadic shifts in tempo and approach, are really something else. Sometimes you'll hear slow melodies in the form of acoustic guitar, violins, wind instruments etc., while other sections contain lightning quick progression, blastbeats, lows and more. The daunting lyricism and philosophical themes presented throughout are aided and accompanied by the smooth enunciation and flow of the vocals, with an ever more consistent instrumental backdrop. Overall, the strongest songs on Scourge are the ones that feature the greatest dynamicism, versatility and variety in terms of instrumentals, "The Great Chain at the Neck of the Earth" and "Abominable Acts" being personal faves.

N/A (As in, I really have nothing negative to say about Scourge as it is a flawless album on pretty much all fronts).

In all, the debut full length effort by Monotheist is one that no metalhead or death metal enthusiast should miss out on. Through all of its faultlessly structured madness, destructive riffage, smooth yet surprising transitions, well executed instrumentals and sprawling extreme metal elements, Scourge manages to come out of its shell and end up at the top. A solid and lengthy first addition to the prog-death metallers' discography and a nice touch to their name, this album demonstrates the music in its finest form...simply astounding.

Fave Tracks: "The Great Chain at the Neck of the Earth", "Abominable Acts", "Scourge"

For Fans Of: Opeth, Rivers of Nihil, Fallujah, Deeds of Flesh, etc.

**This release is available now both digitally and physically on Bandcamp as well as at the Prosthetic Records online store!**