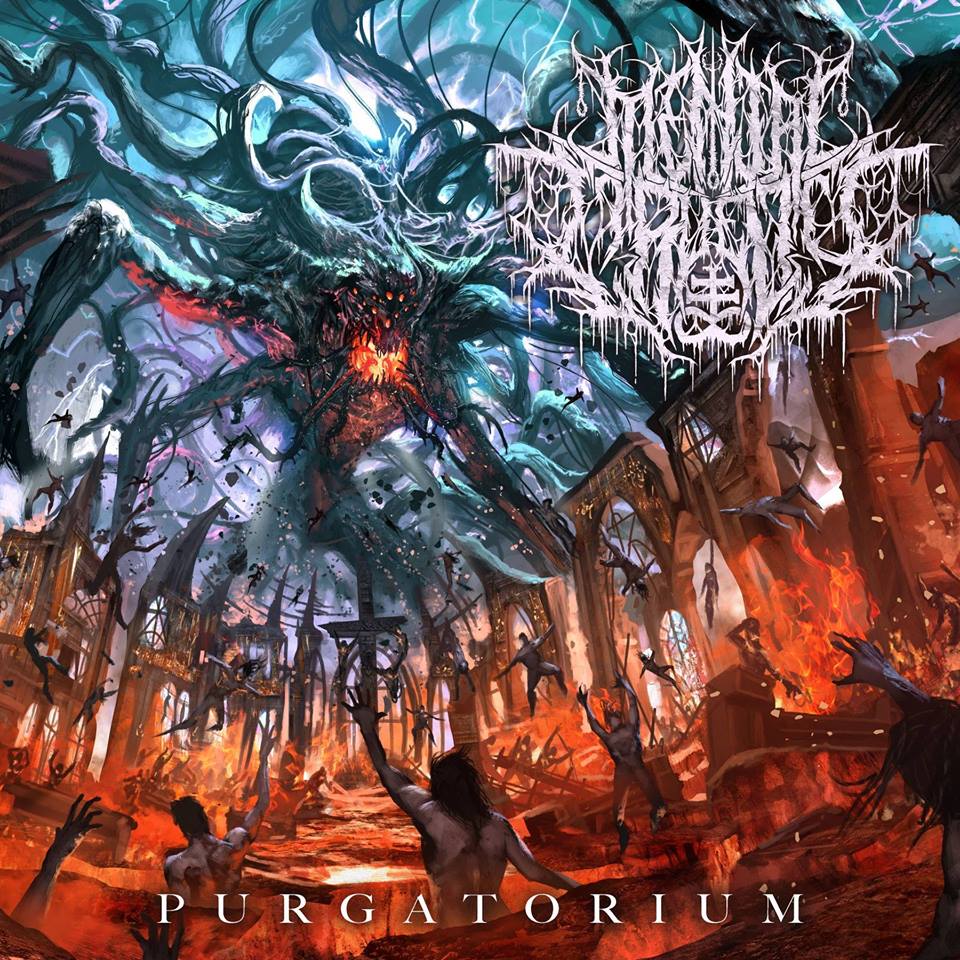 Mental Cruelty stands as a German four-piece modern brutal death outfit that has only been around for a couple of years now. Despite their novelty and freshness, the band has already taken the slam metal scene by storm. Performing under the Rising Nemesis Records label, they are now unleashing their debut full-length offering of sickness onto the world. Can it compete with the rest of the releases coming out this year? Read on to find out.

Purgatorium is an eight track effort consisting of over 32 minutes of brutal slamming death metal music. While the sound itself does delve into other intertwined territories of slamming beatdown and slamcore at times, the album also branches out by adding a sort of technical side as well as certain progressive elements at times...especially towards its beginning. You have your usual drum-bass-guitar instrumentals in addition to some vocal variety comprised of gutturals, lows, and guest spots from members of other related bands such as Gamma Sector & Analepsy. The themes revolve mainly around mental illness with some anti-religious undertones thrown in, judging from the artwork and track titles.

As mentioned previously, this release is undoubtedly disgustingly heavy, in-your-face and destructive at all times. They've pulled out all the stops on making this one very brutal nonstop album. The music does have some technical aspects, including an eclectic variety of fast-paced shredding guitar riffs, drumming patterns and more. Everything sounds clear and audible with the current production quality, making this a very crisp experience to listen to from start to finish. The production and guitarwork, in addition to everything else, makes a good background for the impending slam sections, which succeed in making you want to bang your head until it falls off. These parts of the music are very assertive, as is all else. The band even throws in some guitar solos at times. The structure of the music consists of some of the best transitioning in the genre, with every four-to-six minute track on Purgatorium giving the audience exactly what they want. Another thing to be said is that Mental Cruelty is definitely not afraid to branch out and innovate here; the music, tones, progression and substance speak for themselves. Finally, the guest spots on here were a real treat for an added flair, with each guest artist making their presence known.

To be completely honest, there is nothing really to be said in terms of objective negatives. Personally, there are a few little things I wish were done slightly differently. For instance, there could've been a bit less gutturals and a tad more of the "deathcore" low vocals instead. Obviously many people will disagree with this assessment but it is what it is. Also, the bass lines could've been a little more fleshed out in my opinion.

In conclusion, Purgatorium by Mental Cruelty is a crowd pleaser for fans as it includes pretty much everything a slam metal enthusiast would hope to hear in this type of release. It's got its technical parts, its stupid heavy slam and breakdown sections, disgustingly heavy vocals, and everything in between...making it a full force slamming brutal death metal offering. I know the year just started, but I can already tell that this album right here will surely give a lot of the others in its league a run for their money.

Fave Tracks: 'Father of Abomination'; 'The Venerable One'