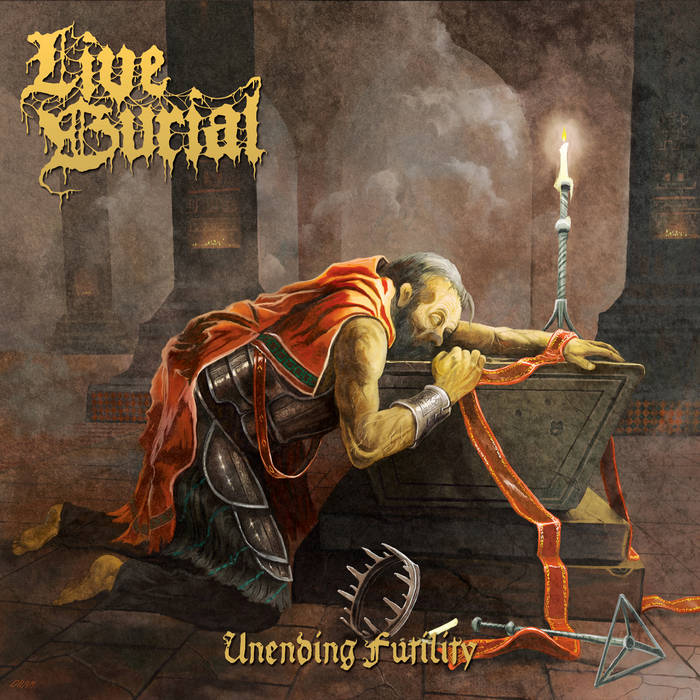 Strap in everyone cause we've got a brazen-faced heavyhitter in store for us today. Newcastle, UK's very own Live Burial is back at it again with yet another fleshed out full-length on the market in the form of Unending Futility. Released not too long ago via Transcending Obscurity Records, this new effort, while only having seven tracks, really exhibits the finer points of the quintet's sound in many ways. And, in its forty or so minute running time, there's a bunch of doom, some thrash and blackened elements as well as an overall oldschool death metal aura to be fond of...as well as a couple of decent guest spots to speak of, as well.

First up, the album warms up its audiences with a little doom-driven introduction that took me back to the greats of Sabbath or the much later Monolith Cult at times. Afterwards, it goes into that speedy yet somehow slow moving death metal verse akin to some 90s stuff and some groovy bass lines as well as great ambiance and some truly daunting blackened vox. A lot of the album follows this clear formula, but mixes it up with a guitar solo, instrumental break/intermission or other little nuances at times and man does it all fit in so well. There's a ton of callbacks to thrash-inspired death, blackened death and even some classic stuff like Bolt Thrower towards the middle. There's a shorter instrumental track towards the end that I thought would've worked better in the beginning of the album, though that's a personal preference obviously, and a very longwinded outro track that goes all out, too. All in all, I really took a liking to the second track for its hard-hitting melodies and one of the middle songs called 'The Crypt of Slumbering Madness' due to its devilish introductory riffs, guitar solos and occasional Immortal/Revocation tech vibes thrown in, too.

This one's a one-of-a-kind offering for a few different reasons. For one thing, it's somewhat brutal at times but also brilliantly written and pays attention to detail and atmosphere for much of its modest running time. It doesn't overstay its welcome, leaves you satisfied and shows off some of the more beautifully and masterfully executed aspects of the doom/death/blackened variety genres. Unending Futility is very ecstatic and polished in its final form, and this is one for the books as a near-perfect follow up to a solid formula as well as one album that I could recommend to almost any death metalhead out there. So give it your time, you'll be glad you did!

Fave Tracks: 'Condemned to the Boats', 'The Crypt of Slumbering Madness'

**This release is available now on multiple formats here as well as on the Transcending Obscurity Records merch site here!**