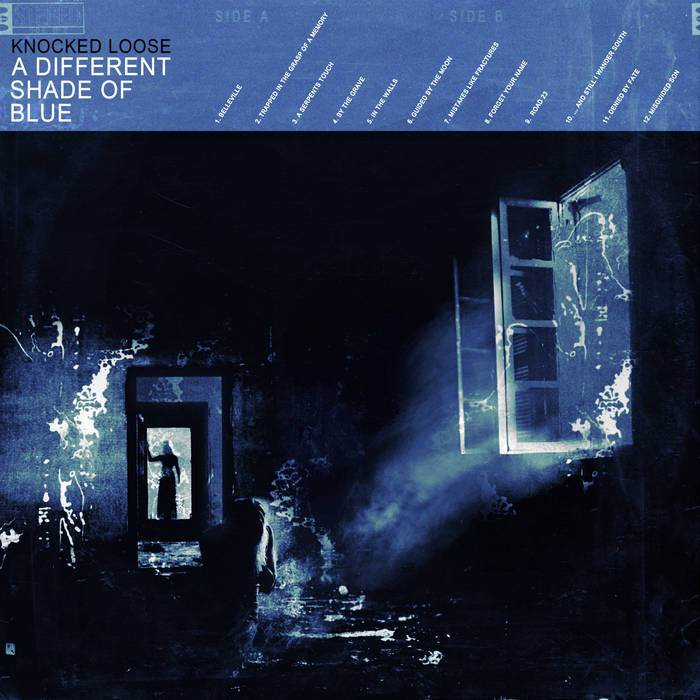 A relentlessly slam-heavy album that's more of the same, but ups on the energy and the riffs

A Different Shade of Blue
by Knocked Loose

Kentucky's Knocked Loose is one of those newer, more up-and-coming beatdown hardcore kind of bands that needs little to no introduction in this day and age. With their splits, EP and couple of full-length releases held tightly and strongly under their large belt, this Oldham County five member HxC outfit is a true force to be reckoned with; their music laden with crunchy chromatic guitar riffs and open note breakdowns, slappy drum beats as well as their usual signature highs courtesy of Bryan Garris, it's no wonder they've grown so quickly and gained so much cult notoriety within the past half decade or so they've been active. And now, they're back at it yet again with their second album for us to give a listen to.

I know a whole lot of you love those breakdowns in this type of music, so you'll not be disappointed when it comes to a release of this calibre. Well, breakdowns of the open-note variety in addition to slammy riffs, to be exact. For here in A Different Shade of Blue you will receive a metric ton of all of those in mass amount as well as all the typical other tropes of the beatdown-hardcore genre as well as some pretty quality guest spots (including one that's courtesy of Every Time I Die's very own Keith Buckley) and the usual stellar production quality and guitar parts associated with the band. All in all, all you need to know is that the new Knocked Loose album is a rather lengthy, dozen track full release with all the trimmings as well as full support via Pure Noise Records.

It all starts off with a very beatdown-slam heavy track that is an unadulterated hardcore riffing song that pretty much encapsulates everything we'd want to hear from a band of this calibre as Knocked Loose. It is a very typical song of them to feature, but I didn't expect to have my head blasted in so early on with all of the slamming chromatics and abrasive screeching, especially in a song that is an actual song and not just one of those early buildup tracks. It remains as one of the album's (and perhaps band's) heaviest to date to be honest. Following this, we are treated to a few more songs that are a bit more atmospheric and high note-heavy than their predecessor.

'Trapped In the Graps of Memory' is kind of ambient for the band until the point where it gets right back into the open notes and such. The lyrics on here are a bit more interesting to analyze than on Laugh Tracks as well, especially early on in this album. This track also has one of my fave breakdown/slam outros complete with an atmospheric ending. The third song on A Different Shade of Blue similarly opens up with a more melodic feel that turns into a typically brutal Knocked Loose sound that features a guest spot from Emma Boster towards the end.

As far as the succeeding songs go, 'By The Grave' has a sort of pumping intro full of buildup riffs that lead into a hardcore verse and ultimately more breakdowns that the band is known for. The subtle bass lines in between the madness are always appreciated and, honestly, I wouldn't mind there being even more of them. There is also a little galloping riff later on in the song that feels kind of out-of-place, but is also a welcoming addition to me. The slamming breakdown really kicks in towards the end, too. The next two songs are pretty much just standard beatdown-slam songs in the typical vein of Knocked Loose's 'Counting Worms' or 'Billy No Mates', with 'In The Walls' feeling a bit like one of those filler songs that could've been edited out.

There are some pretty memorable melodies in the album's middle part, with 'Mistakes Like Fractures' being a single off of this release taking the stage with its lyricism and structural transitions into depravity and malice. There is a lot of emotion and energy displayed in this one song alone...and 'Forget Your Name' with Keith Buckley is one that I really need to listen to more of mostly since I'm just such a fanatic of the guest spot itself. 'Road 23' is yet another filler track, albeit with some catchy bass riffs and breakdowns; also, 'And Still I Wander South' is another heavy hitter I admire for its relentless pacing, outstanding riff action and All Out War-esque songwriting that I can't get enough of.

The rest of the songs are pretty par for the course when it comes to this band, but are still adequate for their energy and performances in the recordings alone. From a technical standpoint, this album is up to par with its predecessor and earlier material. The quality and tone is definitely there and the mix of ambiance with unending terror and high-pitched vocal madness is always welcome in my book. Personally, I wish there was a little more melodic influences in some parts to balance out the slammy goodness, though this is still a classic crusher. Another low blow is the amount of filler material that just kind of takes up space in the end, especially towards the album's finishing point.

A Different Shade of Blue is rather quite the same when it comes down to comparing it to the band's previous releases. However, the shade that is different here lies within the type of energy and charisma that the artists convey in their music throughout. The performances feel a bit more genuine and tryhard, but in a good way, than before. In all, it's a relentlessly slam-heavy album that is more of the same ole Knocked Loose hardcore-verse, beatdown-bridge formula that we've heard many times before now. However, it one ups the previous material in terms of both musical energy and musical innovation itself. There are many different reasons to check this one out...so, don't just take my word for it...listen to it yourself!