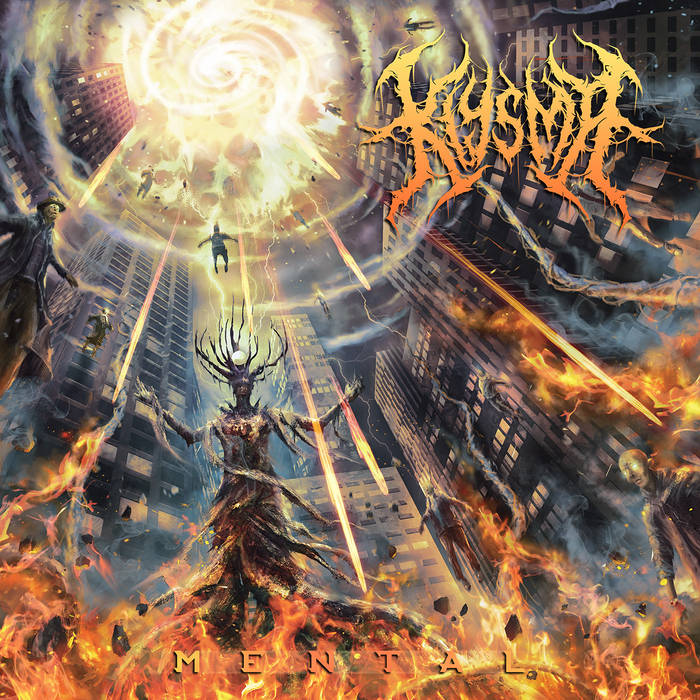 Klysma stands as a Belgian-born and bred brutal band of miscreants that's been on the ole underground metal radar since the release of their 2018 debut album Sick. Slamming riffs and ignant gutturals in hand, the frenzied four piece have recently unveiled their follow up sophomore full-length titled Mental. This new eleven track effort showcases over 30 minutes of abrasive heaviness via Realityfade Records and is available now both digitally and physically. And, with mixing/mastering work done by Wilson Ng (most notably from Facelift Deformation) as well as featuring artwork courtesy of Armaada Art in addition to having about a dozen guest vocal spots throughout, this one's ambition caught my attention. So let's check it!

The album introduces us listeners with some groovy chromatic slams mxied in with tremolos and harmonics as per usual slam album opening before going into a monstrous low growl verse that kinda slows down the pace to a halt at one point but never really lets up. The drumming provides a solid backbone to the dinosaur-esque gutturals in the forefront and the pace picks up after the first track. We get our first taste of ingenuity with 'Abhorrent', which has some deathcore-like riffing for starters and no kidding, some pretty comical dog barking right before a breakdown, which isn't something you hear everyday in this sort of music. I really like the almost Waking The Cadaver influences within the vox in this song especially.

There are a few more surprises in the following songs to be heard, such as a clean vox section towards the end of 'Abhorrent', one Pathology-esque section in 'Prelude To Extinction' as well as not just one, but TWO guest vocalists in the track 'Abulia', which happens to be my personal fave among this album's contenders. 'Delirium' is a short song that I only remember for its out of place Nintendo opening and some other portions of other songs felt recycled, though still somewhat solid in their own right despite their out of place nature. 'Ignorance' has a pretty solid slamming breakdown outro mixed in with some rapping and I really also enjoyed 'Blind Obedience' simply because I'm an Embrace Your Punishment fan. 'Sickness of the Mind' was ultimately alright but had too many of those pesky high squeals, which I didn't really like as much in this release overall. By the end of this album's running time, though, I still liked to go back and relisten to the tracks that had those little funny or offcolour little nuances, though, which is more than I can say for some other albums in this style.

This new slam release might be fairly standard on the surface, but I'd be lying if I said it didn't surprise me in certain points, especially given the amount of production, guest spots, and additional instrumental little nuances here and there that went into it. Mental serves as a sick, demented little reminder that even the more obscure offerings can be hidden gems to some extent. While quite a bit of the riffs seem somewhat recycled by the end of it and some parts of it seemed out of place to me upon initial listen, I still thought that Klysma did a decent enough job at reminding me why I still listen to this type of music to begin with. Long story short: it's fast, it's often grimy and all around edgy in all aspects of its existence...and stands as little to nothing short of what you'd expect from a modern slamming brutal death release. So if you're into stuff like slam with goregrind influences/vox, party slam akin to Stillbirth or Party Cannon and the like, low-brow themes and the occasional pop culture reference, then have at it cause this is the one for you.

For Fans Of: Devour The Unborn, Embrace Your Punishment, Stillbirth