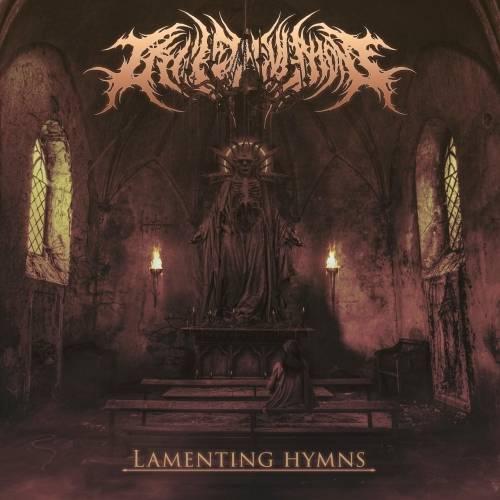 Lamenting Hymns
by I KILLED EVERYONE

Formed in the state of Illinois around 2008, today's band is one that's had a lot of talks about them due to their influence as well as seemingly longwinded inactivity since 2013. I KILLED EVERYONE is a five-piece deathcore outfit that has released thus far three albums based on themes of death, fantasy and real-life struggles. The band was on a few different record labels but are now considered as an independent act...and they are finally back this year with their newfound strength and a new release.

The latest and third offering to date by the band, eerily titled Lamenting Hymns, serves as a comeback release for them. Comprising of nine crushing tracks amounting to over 33 minutes worth of deathcore madness, this album was initially released independently. However, it is also being pressed on CD format by Chugcore Records and appears to have a more mythological/religion (or lack thereof)-rooted concept.

To be honest, I don't really have a whole lot to say about this one. The overall sound of Lamenting Hymns is reminiscient to many of the other deathcore and downtempo albums we've seen released within the past decade or so. It's nostalgic, but, at the same time, somewhat monotonous. Don't get me wrong, my first listen was satisying enough, but I don't know how much replayability this one will have for me. I notably enjoyed the dark atmosphere mixed in with the gritty production, which kind of surprised me at first. The instruments and musicianship is pretty flawless for the genre, but a lot of the times it feels like they're checking off a list of all the things that makes a typical deathcore album.

Some high points I'll give to it are that the vocals are brutally disgusting and the lows are pretty awesome, taking me back to Samsara by The Breathing Process, which I believe had the same vocalist. Also, while the guitar riffs seem pretty familiar and trendsetting, the harrowing breakdowns really put me on edge and made up for the former, especially on tracks like 'Dread', which also has some decent vocal variety; and others like 'A Nameless Mist', which has a distinctive, chuggy downtempo-esque vibe and a grueling outro. Some others I took a liking to include 'The Hateful Verse'  and 'Crown of Tempests', both of which have kind of a slammy, guttural vibe as times. Others, though, like 'Blight' just didn't do it for me.

To be fair, it's awesome that we're seeing a comeback for yet another one of the titans within the deathcore community. Is it an awesome one that'll blow you away? Probably not. But, to me at least, it was just satisfying enough on my initial listen for me to bang my head a few times and keep my attention for its pretty decent running time. The riffs, vocals, and everything else in between are what one would expect out of a deathcore album like this. Be that as it may, it's still a moderately entertaining experience for many a deathcore fanatic.

For Fans Of: Impending Doom, Signs of the Swarm, King Conquer, the Chugcore Records roster