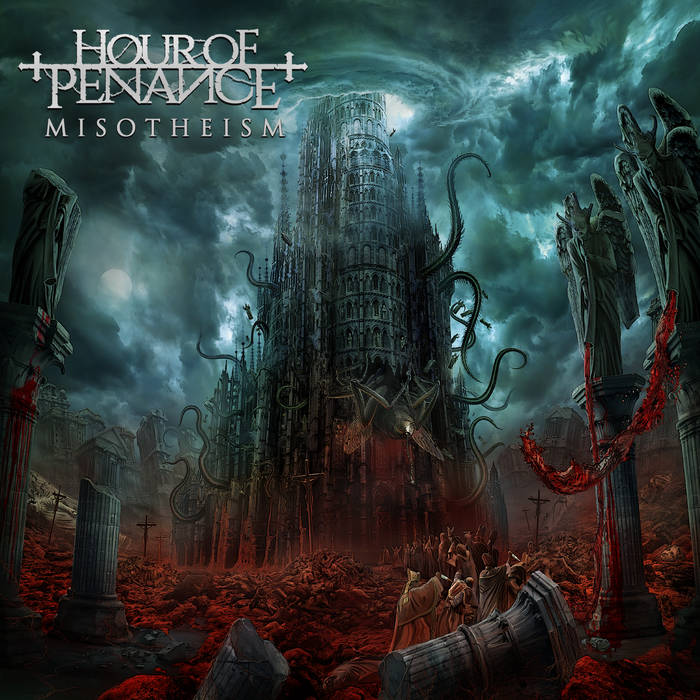 Misotheism
by Hour of Penance

Hour of Penance stands boldly as one of Rome, Italy's most prominent and long-running tech death bands. Formed in the late 1990s, though the steamy, gorey, controversial, shred-emanating quartet has pulled out close to ten releases thus far, they reportedly have no OG members left in their wake. This thematic band deals with some very real world issues in their lyricism and are currently performing under the Agonia Records roster. And now, without further ado, they present to us all their newest effort, which I'm sure will be as brutal as ever (though I can't say for certain since I haven't listened to all the previous material and I'm judging this new one on its own merits). But I digress...here is Misotheism.

Spawned through the depths of hell and the recording and mastering work of Hour of Penance themselves, this 2019 follow-up to the last album titled Cast The First Stone is chronologically the artists' eighth full-length venture to date and sports a grand total of ten tracks, amounting to nearly 40 minutes of content. Furthermore, Misotheism hits stores now and is also available on multiple formats, both digital and physical, via the band's record label.

The opening track gives off an 80s horror movie-esque vibe with its ambiance and buildup to a more uplifting and epic orchestral score. However, it's not too long before the guitar licks come in and give way to the power chords and blast beat madness to come. The guitar riffs are incredibly varied throughout, especially on songs like 'Blight and Conquer', switching swiftly from palm muted tremolo fills to black metal shredding and Beyond Creation sections that are really catchy with their melodics. I wouldn't actually call this a melodic composition though, as its strength lie within the techy (see Hideous Divinity) and somewhat blackened elements akin to the material of the newest Belphegor release.

Anyway, getting right into what makes this one tick: the relentless blast beats are highlighted by the tacky, but fitting snare sound as well as the underlying blackened death growls. Don't get me wrong I want to see this as a technical death metal album all on its own, but you can't deny there is a sort of unnaturally evil presence that is audible in songs such as 'Fallen From Ivory Towers', a track that switches up the tempo almost constantly and has some solid guitar highlight riffs and a very memorable solo guitar line in its second half. The chorus of it really stuck with me, as well. It ends off on an eerie note packed with audio samples, too. 'Flames of Merciless Gods' is yet another song that comes in later on in Misotheism that is a personal fave because of how fluid the melodic parts feel with the contrasting heavy instrumentals, almost giving off a NILE vibe at some points.

The breakdowns in 'The Second Babel' and 'Flames of Merciless Gods' kinda mix it up at those key points, though they are used minimally...and perhaps that's for the best here. The latter song mentioned has one distinct guitar part that comes in late in the song and it doesn't really go anywhere, which was slightly disappointing as I expected another cool solo. However, since it's one of the more fleshed out and dragged out songs that throws in pretty much everything else, I let it slide. Another thing to note is that I oddly enough didn't care much for 'Iudex', another song towards the album's end that doesn't do much and is just there as a filler, despite its fast-paced and usual madness. But the closing song and the ones before it really help to shine through the greatest parts of this release, especially the progressive guitar instrumentals and guitar solos apart from the rivetting vocals.

The new album by Rome's tech death finest, Hour of Penance, is ultimately a somewhat varied, yet heavily technical and even jaw-dropping at times because of that factor, brutal death escapade that includes some decent guitar solo aspiration, stellar drum work to boot, and some blackened style vocals to go along with the gag. There's a distinct nostalgic, almost OSDM sound as an undertone that takes me back to stuff like Deeds of Flesh and oldschool Dying Fetus as well as others in the similar liking of the league, though there are some modern elements thrown in, too. Although I'm not heavily familiar with the band's discography as a whole, the level of musical integrity for this album seems pretty high quality and par for the course when it comes to the greats. It continues the old tech death fomula, but in a positive way, and I'd be lying if I said I didn't take a liking to some feature in pretty much every song on here. There's quite a bit going for it and for good reason.