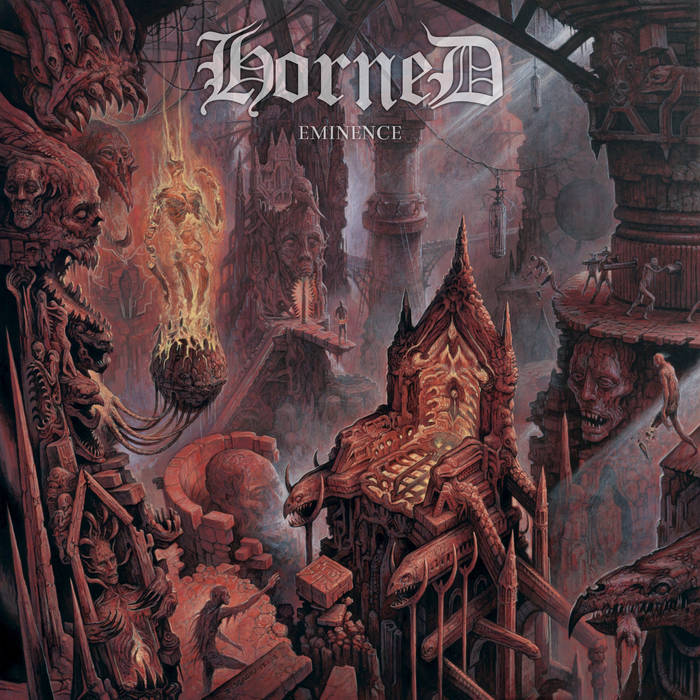 The slam/beatdown scene in France is ever-evolving due to the heightened underground interest within subgenres related to slammy riffs in the past decade or so (and who could blame people for liking them, they're catchy as hell!). Conceived around five years ago somewhere in the Marseille region of France, Horned is the latest contender appearing on our metal radars due to their edgy lyricism and hard-hitting beatdown breakdowns. They've had one other full-length prior and now, under the Rising Nemesis Records label, they've unveiled their sophomore album titled Eminence, which is essentially eleven tracks of slammy beatdown content in its purest form.

Horned sets off on a tremolo/crossover thrashy-hardcore venture with the opening riffage and blast beat madness in 'Emperor'. This goes on for a bit until the instrumentals turn more beatdown-hardcore and the vox come onto the scene, which are, what I could best describe, as a cross between stuff like Hatebreed and perhaps more new school beatdown such as Chamber of Malice, minus the more brutal death influences, though. Many of the tracks also have those appropriately groovy and equally heavy as hell outro slamming breakdown riffs which got me neary every time, especially when it comes to songs like 'Calvary'. 'Hegemony is yet another song on Eminence that sorta gave me No Zodiac vibes because of the outwardly more deathcore-inspired riffs, song transitions and general structure. That ending slowdown is ridiculous, too.

One other track really worth mentioning is 'Apostle ov Perdition' mainly due to its lightning paced tremolo and hardcore riffs mixed in with the similarly hectic percussion patterns. 'The Last Humanist' is one song that's just a filler that could've been removed completely and I wished there was a slightly better track to finish off the release than the self-titled track. Other than that and a few other inconsistencies in the way the tracks blend and transition into each other, I thought this one was really solid both instrumentally and in the way the vox go above and beyond in creating a really aggressive, edgy, angry and generally misanthropic atmosphere.

Although the primary focus when it comes down to this artist and particular release happens to obviously be around the slams and breakdowns themselves, there were still some other things that caught my ears as well. Like the subtle but catchy ambiance thrown in towards the introduction to the album in the opening track, the little slight tremolo solos in later songs and the all around edgy hardcore "tough guy" vocal vibes throughout, this one had some innovative little hints of ideas on the side. Though they don't particularly stick around for long enough, the enjoyability of everything else that Eminence threw my way was stellar enough to keep me through its solid duration. I'd recommend this one highly to the new age beatdown/slam crowd.

For Fans Of: Cold Hard Truth, No Zodiac