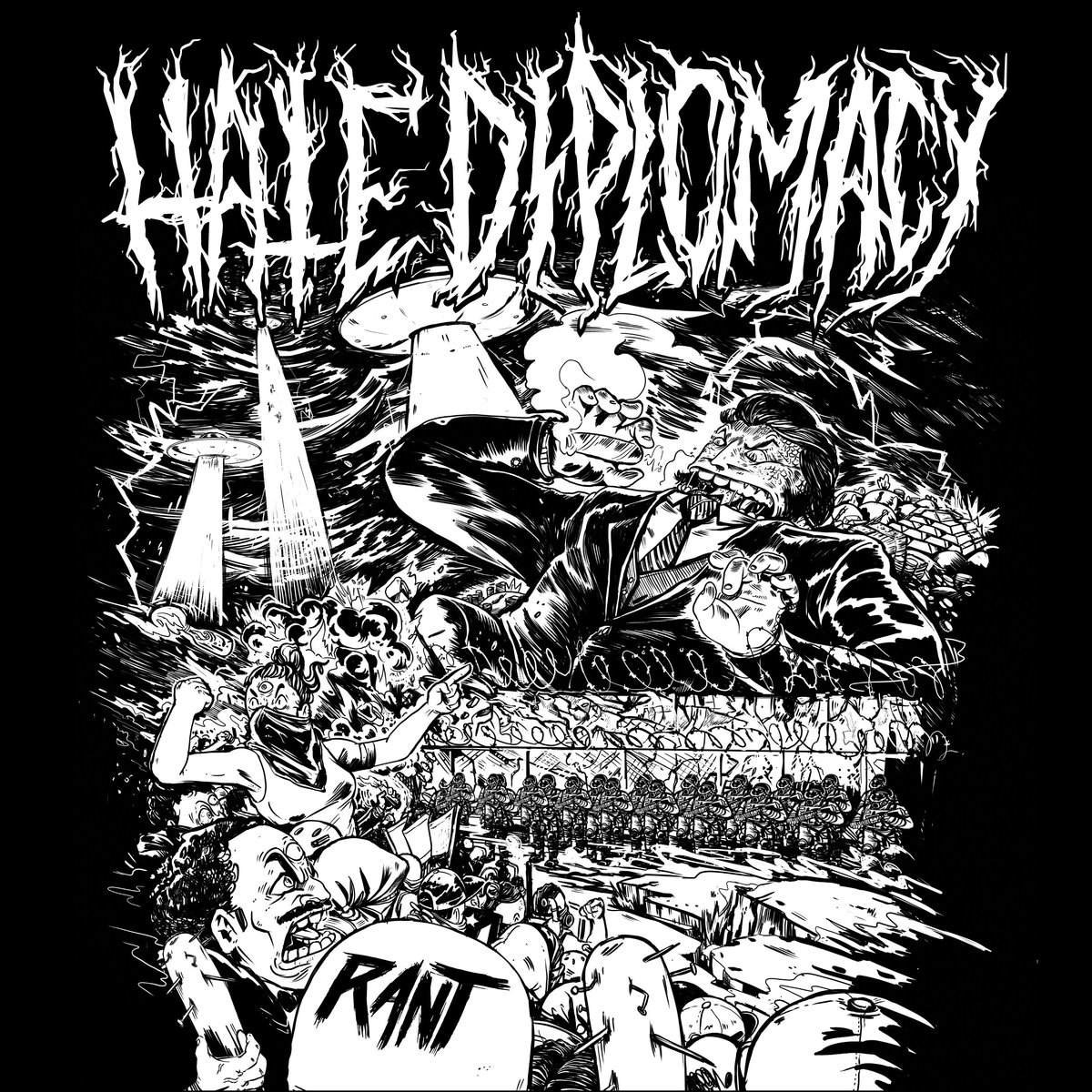 "When tyranny is law, revolution is order"

Slam and beatdown are two genres of extreme metal that often times do not get the recognition they deserve in some cases. With both of these styles being so underground and away from most of the metal scene, it seems that many of those classics fade into obscurity. With that in mind, Hate Diplomacy are one of those so called artists that are up-and-coming in the world and in need of appreciation due to their enthusiasm, musical energy, and brutality. Formed several years ago in Puerto Rico as a one-man band, the entity later found new life in New York City when its sole member moved and grouped together a four piece outfit, with Don Campan of Waking The Cadaver under its belt. Soon enough, the unsigned band released a demo and eventually it lead to the release that we are discussing today.

Rant happens to be the first full length album released by slamming hardcore/beatdown band Hate Diplomacy. Released in the first week of July, 2018, this composition dives into some rather controversial topics and themes, including those related to modern politics, war and overall violence. The independently released debut consists of about 32 minutes (ten tracks) of slams, chugging beatdown riffs, striking low vocals, and fast paced hardcore influences. It is available both digitally and physically on digipack CD format.

The album starts off with a strangely enticing introduction made up of numerous individual voices repeating the headline "When tyranny is law, revolution is order" in succession. From this initial aspect alone, I could tell that I'm in for a pleasantly disgusting surprise. Then, about a minute into it, the instrumentals come in with distorted and heavy glory, the percussional patterns and guitar chords leading into a chugging riff that sets the score for the rest of Rant. It's an interesting first track, to say the very least.

All of a sudden, the vocals come in and the lightning fast pace kicks in. Soon enough, the dissonance turns to a sickening blast beat and tremolo riff combo that leads into the centerfold of the album's sophomore song 'Believe In Yourself'. This track also happens to contain my favorite breakdown/outro to this entire release, with a vocal emphasis on one strong upbeat line of dialogue coupled with some chugging beatdown riffs. Here and there, throughout Rant, Campan will employ his gutturals and Waking The Cadaver-esque "shredded wheat" vocals, which I thought were refreshing to hear. These styles are more audible in tracks like 'Gastrointestinal Torment' as well as 'Fed Up', another formidable track with one of the most brutal choruses I've heard. The guitar tones really aid in the slamming riff chord aspect...and the instrumentals in 'Concrete Arteries' (which is the runner up for best breakdown/outro in this album) and 'Programmed Perception' are some of the best you may hear in this type of music. Overall, though, my personal fave tracks would have to be 'Believe In Yourself' & 'Concrete Arteries' for their slams/breakdowns, vocals and outros and 'Fed Up' for its structure and flow.

In terms of the album's cons, I personally believed that other songs like 'It's The Facts' and 'The Arrival' were some of Rant's lesser tracks when talking substance. Their lyricism and music was still pretty solid, just not to the extent of the other ones mentioned previously. Also, the overall production quality is iffy at times, meaning that some instruments drown out the others, I felt. Despite these, the quality of the content outweights the issues.

While Hate Diplomacy's album Rant isn't the most intricate release, it is still satisfyingly heavy and brutally hard-hitting enough to gain some sort of response from the average extreme metal fanatic. This, combined with its controversial attitude and the inclusion of brutal death riffs and vocals, is what makes it its own thing and gives it the identity of a slamming beatdown hybrid debut for Hate Deiplomacy. It is surely an album that I enjoyed at first listen and will continue to appreciate regularly as time passes on.

Fave Tracks: 'Believe In Yourself', 'Concrete Arteries', 'Fed Up'

For Fans Of: Chamber of Malice, No Zodiac, Waking The Cadaver