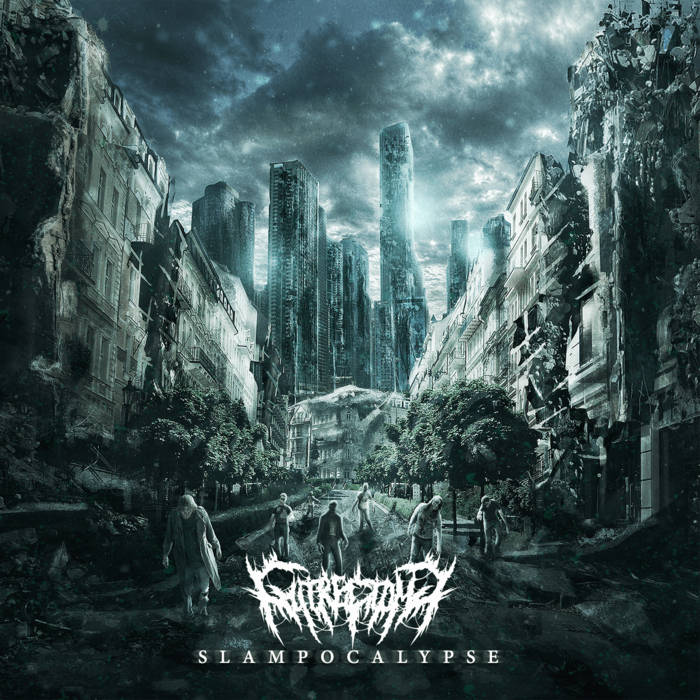 Slamming goodness with a few surprises

You'll never know when the next great slam act will come from. Bands from all over have adopted this underground, extreme subgenre of heavy and death metal and gave their little quirks to it. Gutrectomy is no different. This band, hailing from a town in Germany, is a prime example of what you get when it comes to slamming brutal death metal. For a few years now, they have been refining and continuously developing their formula. And now, through the Amputated Vein Records label, Gutrectomy has recently released their latest follow up.

The new album, named Slampocalypse, is a thirty minute release consisting of eleven tracks. The lyrics here aren't too relevant, you just have to look past that and focus on the amusingly vibrant artwork, consistently brutal instrumentals, and energetic (if incoherent) vocals akin to the genre. The themes are mystifying, even as far as slam goes...and the production quality is more competent than usual.

Slampocalypse is better than your average low-end slam or bdm release in several ways. One positive aspect that really stands out is, as mentioned before, the competent and consistent production, which is lacking in many other releases of this calibre. The band has also apparently taken on a slight deathcore/beatdown route as of late, which is a plus, since branching out and avoiding the "pidgeonhole" into a single subgenre so to speak is definitely recommended here. The vocals are usually your average guttural lows. However, the energy that the vocalist gives shows his dedication to them and the variety is there at times too, even if it is slight and somewhat unnoticeable. The instrumentals are above average for a slam release. The different types of guitar riffs, bass lines, and drumming patterns mixed together give Slampocalypsem some of its innovation and attitude, especially in the album's second half. The little bass-guitar switchover build-ups to breakdowns are a nice touch...along with some of the guest spots. The comical track titles are a plus in my book as well.

Only some minor faults to mention. Firstly, the riffs are pretty standard for the genre. The album could've used the minor shifts it has at some points for greater variety. Some more riff and vocal variety would've been appreciated. And the build-up parts could've been used a bit more as well. Other than that, the release is very strong.

Overall, Gutrectomy's latest album is above average for its genre due to all of the reasons mentioned here. The slight innovation, the flawless production quality, as well as the brutally heavy and on-point vocal-instrumental combination are some of the best you'll get in this type of music.

For Fans Of: Slamming brutal death metal in general

**Slampocalypse is out now digitally & physically on Bandcamp!**