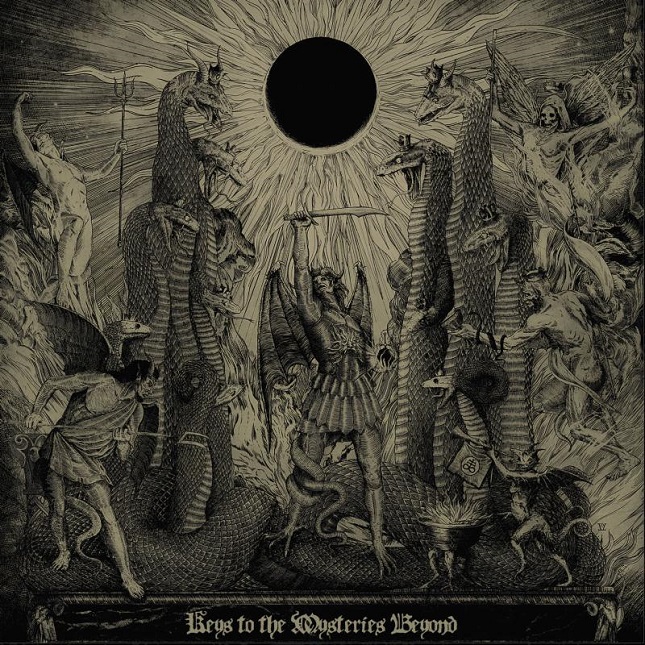 Raffy Reviews - Grafvitnir: 'Keys to the Mysteries Beyond'

Cliche kvlt-style black metal, albeit with lots of energy

Keys to the Mysteries Beyond
by Grafvitnir

The Occult black metal scene in Sweden has a long history and wide range. Grafvitnir is another one of those additions to the ole formula, with themes of Satanism & blasphemy being spread whilst wearing the traditional corpse paint and playing in a dark forest in the middle of nowhere. For the past decade or so, this melodic bm outfit has experimented with their sound...releasing a few full-lengths under the Carnal Records label in the process. And now, their latest offering is upon us.

Keys to the Mysteries Beyond is a rather lengthy release consisting of ten fleshed-out tracks. Each song within the overall composition tells its own story, with themes and lyricism revolving around witchcraft, the Occult, Satanism as well as Transcendence, otherwise known as the state of existence. The three-piece act known as Grafvitnir compose and perform a style of melodic black metal mixed with the typical "kvlt"-like aspects in the vein of older bands such as Gorgoroth, Darkthrone, and more. You have your tremolo picking, blast beat drumming, high shrieks for vocals, low-fi production quality and everything in between.

This release has a lot of energy and enthusiasm thrown into it from all the members. The vocalist gives it his all in the mix, and the drumming is consistent as ever. In addition, the melodies throughout this album are very good. The band does a competent job at emulating the traditional style of the genre as well as the blackened sound and aesthetics. The first half of the release is very strong with all of the cool melodies, demonic undertones, pulse-pounding vocals and everything in between. The production quality gives the vibe some help as well.

A lot of the guitar parts are recycled and become very repetitive after a while. Many of the sections are overused tremolo-picked high notes or standard power chords. Also, the bass (if there is one at all), isn't audible anywhere. In general, the album becomes a cliche towards the end. The two instrumental filler tracks didn't really add much to the music, either.

In all, Grafvitnir has a ton of energy in this release, making it a fun listen for true kvlt fanatics and the like. However, there could've been a bit more done in terms of variety. Overall though, this album is still worth trying for all the things that make it what it is.

**This album is available now from Carnal Records!**