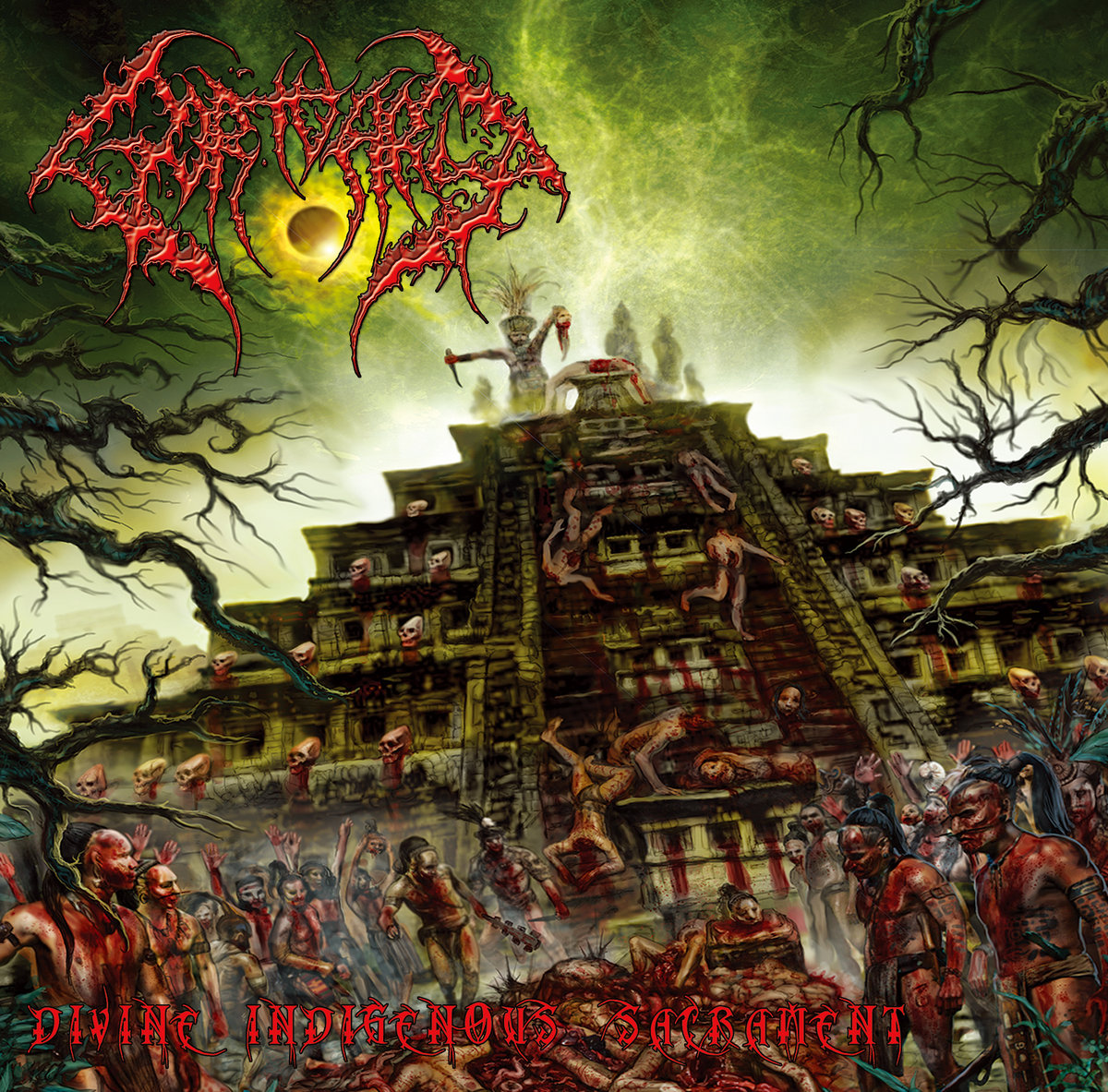 The world of slamming brutal death metal is one that not too many tread into, even within the metal community. Having its origins sometime in the 1990s, the genre expanded all across the globe and has spawned countless bands with sounds akin to the likes of Pyrexia, Devourment, and Internal Bleeding. So, it is easy for a band of this calibre to get lost in the crowd. However, Gortuary remain as one of those slam artists that have succeeded in breaking the mold and staying relevant in their scene. Started in 2006 and hailing from San Diego, California, this five piece group has released three full lengths thus far...with today's album being their third.

Divine Indigenous Sacrament stands as the third and latest album from the California slammers. The new release consists of 32 minutes of slamming brutal death metal mixed in with some technical elements and broken down into nine individual tracks. It was also released via Amputated Vein Records and features artwork from Tony Koehl, who has worked with several other death metal bands in the past including Abdicate and Epicardiectomy on their cover art. The themes here aren't anything new, with the usual blasphemous, violent and edgy concepts you'd want to see and hear.

The album begins with a rather engaging introductory track that includes instrumentals, chugging and slams, in addition to some background noise alluding to the further destruction. It definitely serves as a strong start to it all. Many of the guitar riffs do contain a technical side to them, especially in the second half of this release. The solo guitar action does come in pretty formidable and leaves somewhat of a mark and demonstrates the band's abilities. As far as the drumming goes, it stays consistent and, while some people would comment on the percussion samples and snare sound, I personally think it fits in well with the music. Vocals are what you'd usually hear in the genre, with all gutturals and squeals accounted for; however, the slams that accompany it all are addicting to listen to if you're an enthusiast like myself. Most notably, the last three or so songs on here are all pretty solid bangers jam packed with guitar solos, great riffs, solid slams and general heaviness and brutality.

In all, the first few tracks of this release (after the intro track and prior to track five) are a bit on the drab side, just with standard and unimaginative riffs and not much else to them. Fortunately, the album does pick up a lot later on, with the latter half making up for it. Additionally, the mixing isn't the best with the drums frequently being drowned out, though it is mostly acceptable as far as this music goes.

As a concluding statement, I would like to state that Gortuary's new album is ultimately an enjoyable and fairly strong slam release in most aspects, despite a few early tracks and other minimal flaws. It knows exactly what it wants to be and sets out to be as brutal, slammy and somewhat technical as possible...and, in my opinion, it's suceeded in doing all of those things. The album is an engaging and fairly amusing one that no slam fanatic should miss out on.

**This release is available now on Bandcamp and at other retailers!**