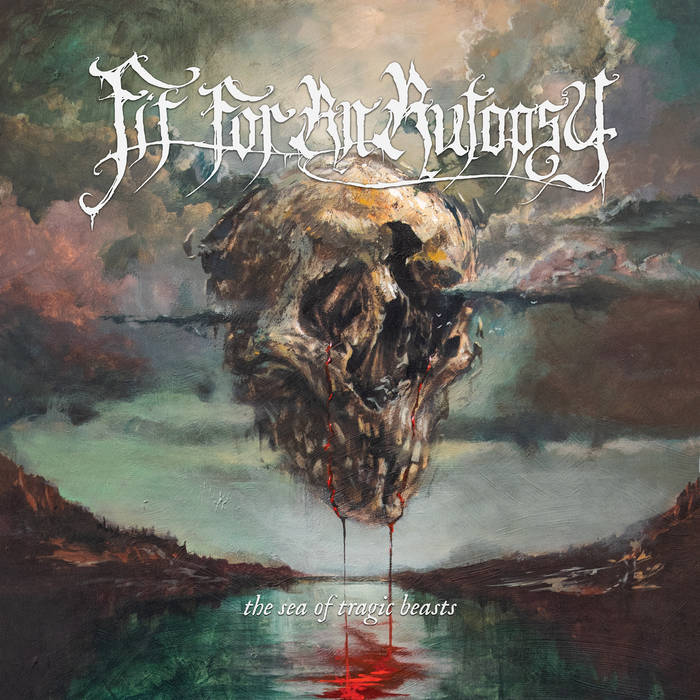 Raffy Reviews - Fit For An Autopsy: 'The Sea of Tragic Beasts'

A rather atmospheric and slow-paced, but not tedious or tired, matured release that builds upon its predecessor

The Sea of Tragic Beasts
by Fit For An Autopsy

I've been waiting and holding out on talking about this one for a while now, and for good reason too. I have to say that, personally, while I was never the biggest fanatic of this band's work, I really do appreciate the mixing/mastering talents of Will Putney and sort of like the instrumentals on some early tracks in their career (to an extent). Fit For An Autopsy has been building a name for themselves close to a decade now and are showing no signs of stoppping. What with half a dozen releases, evergrowing notoriety, sharing the stage all across the continent and perhaps globe with big names in the genre such as Thy Art Is Murder and The Acacia Strain, there is a ton of potential to this New Jersey-based Nuclear Blast icon that is Fit For An Autopsy.

Breakdowns a plenty, The Sea of Tragic Beasts attempts to take a slightly different approach to the tired deathcore formula and features ten tracks of mystifyingly heavy core content courtesy of the band themselves and the Nuclear Blast record label.

The album begins with the classic self-titled track, which serves as a building block and nice representation of what's to come. It's sort of a slow-paced but catchy song that's got some proggy riffs and some choruses that kinda stick with you. There is a mix of clean vocals in there, which may put some people off, but I thought it mixed in nicely with the background melodies. 'No Man is Without Fear' is a song that includes some lengthy intro buildup as well as djent breakdowns played over hammer ons to boot. It's a heavier track but not nearly as memorable as the opening song. The third song sticks more closely to the formula of the opening track, which works in the album's favour. 'Mirrors' was a track that really stuck out to me for not only its accompanying music video, but its dissonant chords and manic progression, with some aspects of ambiance similar to the previously mentioned songs.

'Napalm Dreams' is probably my personal fave and a go-to track for me as fas as this release goes. The light guitar work and slow drumming combined with the harshness of those deathcore mids as well as the following rhythmic and lyrical passages and The Contortionist-type riff undertones in between really helps the song shine through. The hook line "all I wanted was a way out" kinda stuck with me days after I listened to this album, too. 'Mourn' is yet another one of those more progressive songs on the album that I really jammed...a mix of great buildup, stellar melodies and eclectic vocals really goes a long way here and there. The somewhat new direction caught my interest at most points; though I also thought that a couple songs, namely 'Shepherd' and 'Warfare', sort of lacked that particular aura and direction, opting for a more straightforward hardcore-esque structure that is just in-your-face melting and aggressive. I liked the more balanced elements on this album overall.

As far as the deathcore releases go for this year alone, the new Fit For An Autopsy record is par for the course when it comes down to competing with the better and more memorable offerings. It's rather atmospheric at times and even slow-paced, with an emphasis on vocal work (once in a blue moon of the cleaner variety as well) and melodics in between the all-too-familiar breakdowns it peddles in between. But, ultimately, it's a slight distinction from all the other tired and tedious crop out there and has a stellar, mature head on its shoulders that attempts to build upon its predecessors in any way it can. I'd recommend this one to the melodic and progressive death/metalcore fanatics out there and it's good that I finally heard something from these fine djents that I can actually sink my teeth into from start to finish.