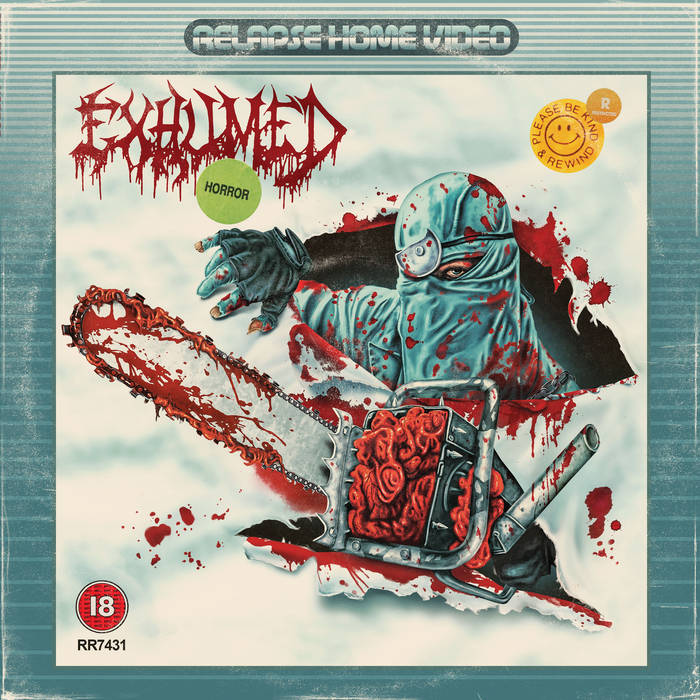 A return to once-great and gory, brutal roots for the Cali crushers in this latest installment

The gore and deathgrind scenes were massive underground communities back in the day that garnered a cult following due to the insanely graphic artwork that became a staple of the genres and others like it, an insatiable appetite for controversial lyricism that broke the boundaries more so than your run of the mill death metal band, and the haphazardly brutal music that came with the package. Exhumed is and was undoubtedly one of the major players in the scene that helped to establish the overall soundworks and foundation for the "gore metal" (TM) moniker and became known as a heavy hitter and influence for many releases, bands and years to come. The California crushing death giants have released around ten full-lengths in addition to a various collection of other paraphernalia and mini cuts that are as obscene in amount as the band's own compositions. And now, Matt Harvey (vocals/guitar) and co. are back with a new, yet all-too-familiar return to form. So let's see what creepy content they've got in store for us this time around!

This new release being the San Jose quartet's ninth full-length total as well as a follow-up (though, in a few ways, anything but...and that will be discussed later on) to their previous 2017 offering Death Revenge, HORROR stands as a more brief but equally as brutallic and disturbing creation courtesy of Exhumed. The 15 track effort brings back many of the band's roots and musical elements their career was built on that may have been absent in the last couple albums. Released via Relapse Records in October, 2019 on digital and multiple physical formats (i.e. CD, LP, etc,), this Joel Grind (Toxic Holocaust)-mixed/mastered nightmare is a grindey and death-ey journey (pun intended?) through roughly 26 minutes of the 90s goregrind, deathgrind, gore metal and death metal sound that many have come to know and expect from the boys.

It all starts out with a blood-splattered entry in the form of 'Unsound'...and with a surefire bang, to boot. The intensity of the leads surpasses any other intro in Exhumed's last few releases, in my opinion. Doesn't take too long for the mixed garbled death metal growls/campy signature high vocals to come in, either. And, as with pretty much every other song on this album minus the very short few second filler tracks, there is a guitar solo midway through the opening track that honestly isn't much to write home about, though it does get the job done just right as a headbanger and segway into the final chorus. Then we come to 'Ravenous Cadavers', which oddly enough reminded me of 'Limb From Limb' in the debut full-length with how the "Kill, and kill...and kill" line goes.

The thrashy death metal riffs are a mix of the fast tremolo and hammer on variety with a ton of open note chugs smack dab in the middle. There are more intricate passages at some points as far as instrumentals are concerned, especially in the album's second half as well as in longer songs such as 'The Red Death', which I really enjoyed due to the relentlessly punchy vibe in the middle of the "fleshed out" verses. The drums do a solid job at kicking in the chorus lines and transitions, as well. 'Ripping Death' is another death-inspired track that really stuck with me because of the memorable outro and intense guitar solo action that makes these two minutes or so rather worthwhile. Sure, a lot of the stuff sort of blends in and starts to sound repetitive, but the modestly brief length of the tunes overall counteracts the mundane factors at the end of the day.

There is a music video associated with 'Naked, Screaming, and Covered in Blood' that you have to see for yourself just to laugh and simulatenously listen along to how campy and brutal the whole package is. The closing song on HORROR embodies a more structured but still equally as lightning fast-paced vibe akin to stuff you'd hear on the previous release, though the silver lining is that the deathgrinding elements are very dominant in this one, which turns out to be a breath of fresh air from the more techy, oldschool sound of Death Revenge. There are a couple songs I didn't particularly care for on here like 'Clawing' and a few of the really short filler tracks that added nothing to the music. Overall, though, I give quite a bit of merit to the innovation of returning to roots and refining old crafts.

HORROR is solid and high-end on the grind aspects as far as the genre goes and feels like a breath of fresh, but very familiar, air. The Cali crushers over at Exhumed really took a stab at their brutal and gory roots in this newest installment, with lyricism and themes so nostalgic and oldschool at the same time you'd think you were listening to Gore Metal (their debut) all over again. From the subtly memorable chorus lines to the haphazardly timed tempos and chaotic riffs that come with plentiful solos all over the place; all the way to the vocal glory that helped establish their respective sound, it's no wonder these gents are still going at it hard, heavy and strong after over two decades. It's an old formula with experimental and chaotically sloppy results condensed into just a couple minutes each, but it's the sound that makes them tick most to me.