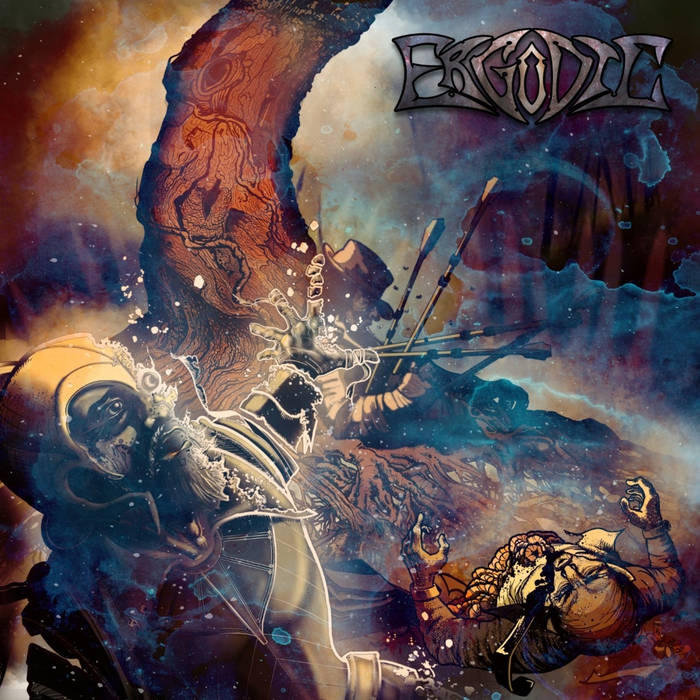 Ergodic is a rather techy death metal band in the vein of the whole "aliencore", early Enterprise Earth, Rings of Saturn, Archspire, Beyond Creation-esque sound that hails from North Carolina's capital city and is making some groundbreaking and milestone strides as of now. It's come to our attention that this relatively new unsigned quintent has unveiled their debut EP onto the world. The self-titled EP is just over fourteen minutes long, consists of three tracks and is available digitally on Bandcamp now at the time of writing this. So let's do our part and check it out!

Okay, so when I said that this EP had some aliencore influences I was being somewhat inaccurate. A more apt way to describe it is to say that there are some very technical (if sometimes all over the place) guitar riffs in the form of tremolos and arpeggios accompanied by half decent lightning paced drums and toilet gutturals in the vein of Monotheist or Pathology thrown in. There are also some pretty melodic solos to be heard here and there aside, and the second song really highlights this factor on this EP. The clashing guitar lines that lead into the clean acoustic bit in 'Veil of Dementia' got me good and the parts that follow thereafter felt a lot like The Faceless or similar material. This one is good for those guitar heads out there just looking for something over-the-top techy and otherworldly sounding in all. It's basically Rings of Saturn with a more death metal oriented structure and sound and more low vocals than highs. Feels a bit more matured that way and quite a few parts took to my liking for their complexities, despite all the low-brow stuff in the midst.

This new little EP, for a debut release at the very least, shows a ton of promise and ambition within the guitarwork department. It's a bit more structured than other stuff I've heard of this calibre in recent times and the vox, while familiar, does the job right. The production quality is that standard top notch for this genre, which is somewhat uncommon for an independent effort. So there's quite a bit to applaud in the short running time. You've got some decent solos, some otherworldly ambiance and all out chaos in the midst to experience. So, while this is not anything you haven't heard prior if you've been keeping up with the bands mentioned earlier in this review, it's still something to gain your attention for a bit...and something to appreciate from a smaller level, newer artist.