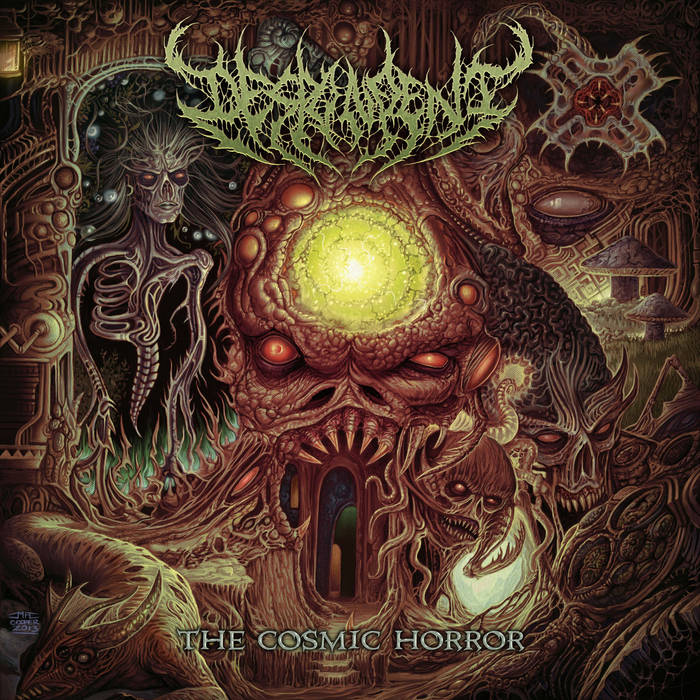 The Cosmic Horror
by Despondent

This album in question has been one that's been long awaited by myself and other fanatics of the band's label (and band itself) due to the long period of time it's been postponed for. There's been some technical difficulties here and there; but now, without any further delay...here is The Cosmic Horror in all its glory for us to finally sink our teeth and ears into. Despondent has come a bit of a way, changing line-ups left and right, with its sole original member Tyler M. being around since its inception several years ago, and has released a few other EPs and a couple of splits with other smaller name bands in the scene. The Columbus, Ohio-based project is now back, though, and it's bringing with it a few added surprises including over a dozen guest spot vox's put into a total of thirteen brutal tracks for nearly an hour of technical brutal death metal fun to be had. This debut full-length is available now via Transcending Records.

There are a bunch of elements to be found in Despondent's latest work that really make me admire it for some odd reason. The thrown in little bits of EDM or melodic/classical instrumentation in the form of grand piano, oldschool strings or just basic beats are a breath of fresh air and good fun to be had at first; however, they feel like a gimmick that becomes all too familiar after the album's first half. The first couple of tracks give off a very ominous vibe, with parts that reminded me of the aura or ambiance I previously experienced in Beyond Deviation's last album due to the tone of the piano, the structure of the songs in relation to the vocals, etc. And, though it generally takes a while for the songs to start up because of the atmospheric intro build ups, the slamcore and techy chaos that ensues really make the wait worth it, too. The breakdowns are used sparingly, with the song 'Dimensional Shambler' being one of my personal faves early on because of how well and swiftly it goes right into the madness with a droning downtempo riff and some blast beats that follow into solo high note shredding played over some groovy bass licks and grimy blackened growls. The tempo here is unpredictable, and the added guest vocals make for an interesting vox experience packed with eclectic squeals, some hints of goregrind, your usual brutal gutturals and more. This one especially highlights my fave parts of this release.

As far as some of the other tracks go, 'Paradise Lost' and 'Ex Oblivione' have their own charm that grabbed me in at first primarily because of their fast paced packed with a more subtle tone and brief running time in addition to the typical guest spots that I was excited for. Some tracks get right down to it while others take their time, which is fine, but I found myself inclined to get right to the madness and the somewhat longwinded intros made me antsy. 'Grotesque Mockery of Reality' is possibly my fave off of Despondent's new album for the fact that it's got that Monotheist-esque vocal chaos courtesy of JJ Polachek (who unfortunately left that band not that long ago). Additionally, while Jamie Hanks and Bodysnatcher's Kyle Medina both did guest spots that also stood out fairly well to me, I thought that the guest spots earlier on hit the right notes, though I liked Medina's spot especially in the second half. The couple of filler EDM/smooth ambiance tracks that show up near the end could've also been taken out completely, in my opinion. They're not bad, but they're not exactly what I came in for, either. Generally, however, this album was more hit than miss because of my excitement to hear the vox as well as the techy guitarring mixed in with the occasional downtempo-deathcore breakdowns and once-in-a-blue-moon slammy chromatics, too.

All in all, I have to say that, based on the amount of effort compared to the wait time for this one to finally drop, there is a bunch of decent material to be found among the occasional filler stuff. The Cosmic Horror is a somewhat promising debut that features a hefty ensemble of rising stars within the slamcore community, and this, along with the little experimental bits of orchestral, symphonic or electronic elements thrown in between, make listening to this one at least once worth it in the end. The ambitious degree of innovation is there, which frequently overshadows the sometimes repetitive formula that the album assumes within the second half of the composition. Overall, if you're a fan of slamcore, tech death(core) or any of the stuff in between or those bands that could be compared to Despondent's debut genre-wise, or a fan of the label itself, then definitely give this one a try. Otherwise, it could be hit or miss at times, though the fun parts are generally greater than the dull ones.

For Fans Of: Acrania, Beyond Deviation, Enterprise Earth, I Declare War