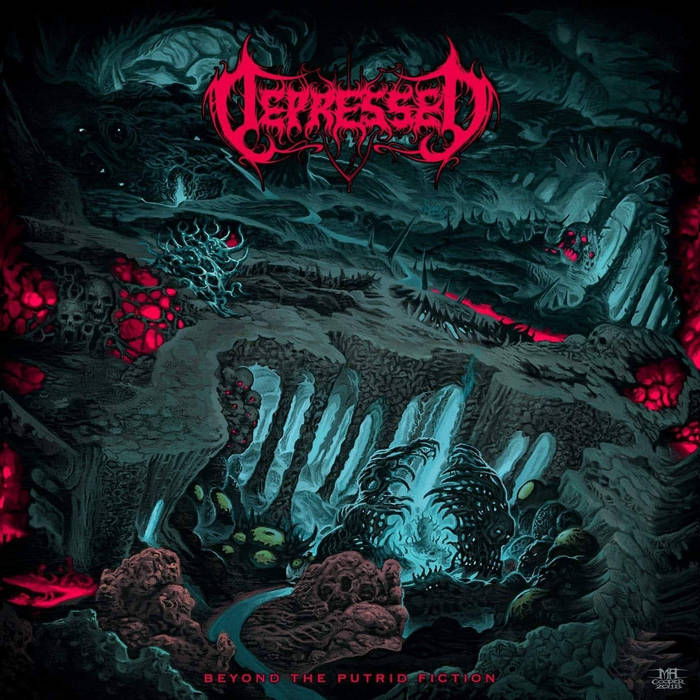 Old school death metal that's fast, fun and gets the job done despite being fairly standard

Beyond The Putrid Fiction
by Depressed

With the new year straight ahead, it's time to start it off right with a death metal review. And the subject of today is the Brazilian Occult-obsessed oldschool quintet known as Depressed. Having its origins in late 1990s Sao Paulo, the Black Lion Records roster band dabbles in toying around with lots of classic and new age death metal tropes, along with the usual anti-religious themes cherry topped in there. Despite being formed decades ago, the band hasn't released their debut full-length album until 2015...and their follow up to that is what we're focusing on today. This sophomore album titled Beyond The Putrid Fiction is chock full of many of the traits you'd want to see/hear in your average everyday death metal offering. Packed with over forty minutes of content dissolved into a dozen tracks of fast shredding, solos, blast beats and gutturals, this one's got quite a bit going for it, so let's check it out!

The onslaught commences with your typical brief build up track consisting of some Gregorian background chanting, percussion echoes and a few fairly ominous guitar riffs that lead into the first real (self-titled) song. It doesn't waste any time with build up here and cuts right to swift death metal octave and open note riffery, endless blast beats and Obituary-esque vocals. The overall sound here is familiar as all hell, but it helps to break loose all the emotional, blackened madness on display. The song structures are also pretty standard, though there are some surprises here and there, such as a guitar solo or brief melodic instrumental intermission here and there. 'Into The Realm Of Abhorrence' is one song that pulls this off by going into a Children of Bodom type of riff salad combined with some latent Viking metal melodics with how the interchanging guitars sound in unison.

I also really enjoy the production quality all around, especially with the guitars, though some of the drumming samples could've been a bit better, such as the double bass kick sounds. 'Delight In Pain' is a track filled with tremolos and guitar solo action with some core open note chuggin in the background. I also kinda wish there were more of those grimy slam chromatic riffs such as the ones in 'Blame On Hate', which were somewhat addicting to listen to. Additionally, songs like 'Unholy Covenant' as well as 'Descending Into Madness' had a lot going for them with the riffs and vocals, but they ended kind of abruptly and I wish they had more to them. On the flip side, 'Mandatory Coexistence' is one song I thought felt too drawn out. And the album ends off strong with little signs of stopping in the last couple of tracks. I was thankful it didn't do too much of the melodic/instrumental filler stuff a lot of bands do, so there's that, too.

At the end of the day, there isn't really much of anything in Beyond the Putrid Fiction that you haven't heard before if you're even remotely a somewhat avid listener of death metal. There are a couple of surprises in the guitar department and, with how much blast beat, solo and riff salad action there is in between the melodic sections and whatnot, I'd be lying if I said there weren't enjoyable moments in this one. The guitar solos had me on edge and the generally fast pace and structure, along with the familiar yet addicting low growl vocals, really hit the sweet spot of my ears despite their slightly cliche tropes. There is fun to be had here, you just can't go in with your expectations too high. If you're not too picky and just want around forty minutes of oldschool death metal madness in the vein of stuff like Cannibal Corpse, Morbid Angel or the like, then this one gets the job done decently.

Fave Tracks: 'Into The Realm of Abhorrence', 'Unholy Covenant'

**This release is available now both digitally and physically here!**