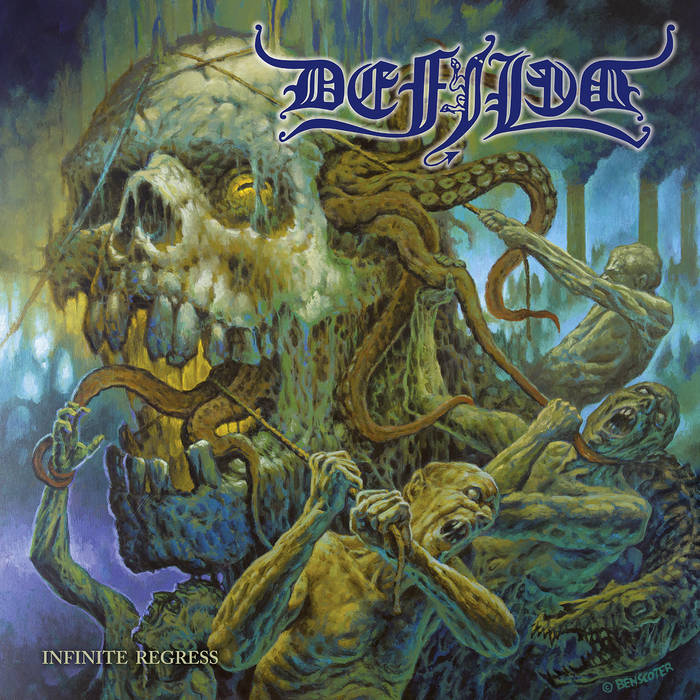 We have fairly broad horizons on the site and try to include as many bands from different genres, parts of the world and inherent walks of life as possible to promote all the distinct and occasionally obscure sounds you could find in the world of metal. Japan's very own Defiled is one band that encapsulates both the oldschool familiarity and the modern aesthetics of death metal and, in a nutshell, this Tokyo-based four piece is original in the way that those characteristics are mixed in. Formed in the early 1990s, the outfit has played the world over in the decades it's been around, and, in addition to the half dozen full-length releases it has under its belt, Defiled is still going strong to this day and has no intention of backing down. And now, the Season of Mist Records-endorsed oldschool death dealers are back with their sixth album to date...so let's check it!

Infinite Regress is, in essence, fourteen tracks of death metal that can be described as techy in some parts with generally grindcore-esque song lengths in some regards (with most songs being just a couple of minutes save for one or two), and an overall OSDM ambiance and Cannibal Corpse-esque cookie monster vox mixed in with Morbid Angel and frequently Cryptopsy riffing. The intro track is just twenty or so seconds of audio sample build up that goes into a thrashy sorta song in the form of 'Divide and Conquer'. Unlike the rest of the album, the vibe here sets off on a very early 1990s thrashy death metal sound and the finicky drum samples prove that further, too. 'Tragedy' is one of my fave tracks and one of those early album heavy hitters that feel really fleshed out and carry a steady tone that transitions frequently between droning choruses, fast tremolos and a somewhat melodic backbeat to boot. There's also a guitar solo or two that managed to catch my ears.

I kinda wish there were more songs like 'Tragedy' on here, but the ones we get later on have quite a bit to offer up in terms of lightning swift musicianship and more of those familiar, yet welcome OldSchool DeathMetal vibes. 'So Blind' is another song that caught my attention for its chaotic and simultaneously destructive guitar lines and breakdowns; and, with other songs like 'Masses in Chaos' as well as 'Aftermath', which are rather brief but catchy all the same, there are enough riffs and explosive instrumentals overall to keep your attention for half an hour or so. Some tracks are rather throwaway, and I kinda wish there was a bit more to the bass line substance. But, as the album stands in its current state, Infinite Regress is a straight banger all the same from start to finish.

Defiled's latest effort to the world is one jam packed with a ton of mixed vibes, eclectic song structures, technical and grindy vibes all the same, and some very formidable oldschool death metal musicianship that'll be sure to entertain your senses for its modest running time. The riffs and vox found in Infinite Regress possess a lot of the qualities about older death metal that oldschool fanatics will be greatful to hear, and those more modern listeners who are inclined to hear something slightly different will be in for a few short surprises here and there, as well. It's a mixed bag, but in a really solid sense of the word that hits all the right marks in my book.