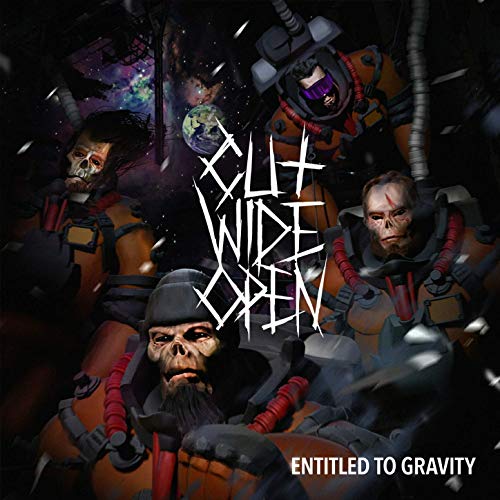 The Finnish heavy metal/core scene is one that has an interesting and eclectic cornucopia of artists who contribute a wide array of influences to the genre. Cut Wide Open is a testament to the previous, with a newfound sound akin to When We Buried The Ringmaster's deathcore lows and breakdown instrumentals mixed in with some decent US hardcore elements and riffs. Being a relatively new Espoo, Finland-based outfit, little is known about the members themselves. But, for now, let's focus on the topic at hand: the music. Entitled To Gravity is the thought-provoking title to their debut album release, which sports seven tracks. So let's talk about it.

'Pro Vanity' starts off Entitled To Gravity on a rather techy, somewhat thrashy oldschool/mid-2000s deathcore vibe in the vein of stuff like Through The Eyes Of The Dead and with breakdowns akin to Ion Dissonance material. These factors making it possibly my fave off of the release, I hoped that much of the album would follow this pattern. And it did, for the most part (that is, whenever the more hardcore-esque and melodic sections aren't on full blast). Don't get me wrong I'm a hardcore fanatic to boot, but the artwork and band name really gave off a nostalgic feel. To follow up, 'Mexican Standoff' begins with a very interesting alternate picking slow tremolo riff that keeps attention for much of the track and soon enough goes into slamming breakdown mode. The screeching hardcore vocals juxtapose with the death metal low growls from here on out and several harmonics and lows later we're treated to yet another chugga-chug breakdown before the final chorus kicks in. One thing to note also is the stellar production quality, which I appreciate in addition to the chill drum samples utilized.

I have to say that the constant sound transitions and mixture of elements really kept me at the edge of my seat, especially for how short this release actually is. The previous song was the shortest and 'Go Hard or Go Home' came off as a very Emmure like song with a ton of cheesy but different spoken word and rapping/gang vocals that mix in with the regular deathcore screams, coming off also as Despised Icon at times, minus the pig squeals though (which would've been interesting to hear). Overall this is kind of a gimmicky track with some melodic riffs and catchy hooks, but not much else. The remaining songs consist of a brief instrumental interlude complete with acoustic strumming and such, another slow-paced and melodic deathcore song ('The Wolf You Feed', another personal fave), as well as two more thrashy deathcore tracks in the mix. The breakdowns are used a lot more in the second half, too.

This debut core release serves as more of a brief EP and a sendup of what's to come in the band's near future material. All in all, it's a loud and vulgar core-infused composition with a lot of variety in terms of the vocal angle and some epic breakdowns and melodic undertones thrown in as well. It's a release that I'd truly recommend to those from the OG MySpace deathcore or new-wave hardcore crowd who are looking for a slightly distinct type of core sound. There's not much else to say about it, but it speaks for itself...so check it out!