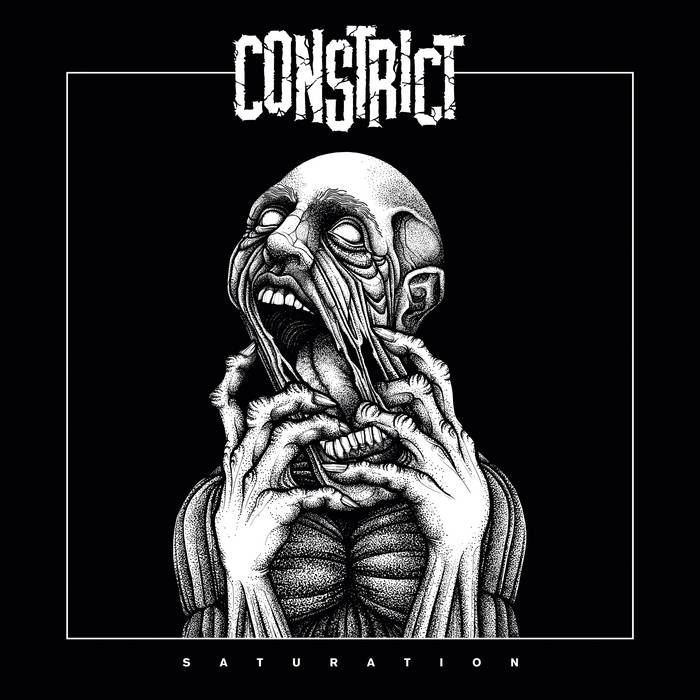 Constrict is a Brandenburg, Germany-based grind collective that is relatively new to the core scene. With just one other demo and full-length under their belt, they're still out there trying to make a name for themselves through their abrasively brash and chaotic sound, which are some features of their music that deserve some admiration in their own right. To put it briefly, they're an independent five piece with a brand spanking new release on our radars for us to check out. So let's dig into their latest six track EP effort in the form of Saturation.

Saturation is generally a middle of the ground grindcore effort with some solid oldschool nuances and stellar little eclectic sound influences from other subgenres thrown in some parts. The production itself was done by NONVDIC frontman James Lewis (mixing) as well as Nightmarer guitar player Simon Hawemann (mastering), so the sound quality is rather stellar this time around, avoiding the low-fi Insect Warfare sound in exchange for a more modern vibe. It's fast as hell and chaotic throughout, with much of it leaving me 'lost in translation' so to speak, when it comes down to picking apart specific riffs or drum patterns. The vox are as abrasively grind/powerviolence as it gets and certain parts of the ten minute duration stuck with me.

While the first track takes a while to start up and opts for a more sludgy, slow start that leads into a brief moment of chaos before the song ends, the next few tracks (all of which are around a minute to about two minutes in length) offer some pretty chill crossover hardcore riffs and vocals in addition to some cool melodics within 'War/Peace', which is my second fave song. My personal fave is 'Disgust' due to its heavy as balls ending breakdown that got me moshing for days. 'Despair' was one song I could leave or take, though, and there are other parts that I felt could've done with more nuances, as well. Overall, however, this EP is pretty entertaining if obviously unfocused at times.

In the end, while this approximately ten minute offering isn't too much to go on and sounds fairly standard throughout, it did have some high note memorable moments to talk about. From that sorta melodic backdrop tremolo riff in 'War/Peace' to the oldschool hardcore nostalgia ambiance of 'Slaves To The Flame' and especially that chuggy breakdown outro that I enjoyed so much in the last song 'Disgust', there is definitely promise to be found in Constrict's new EP. This one's a fairly decent listen for those with shorter attention spans (as it is both short in length and pretty chaotic from start to finish) or with around ten minutes to spare...and for those who enjoy grind with some hardcore/powerviolence/deathcore stuff thrown in. I just hope the next release is a bit more fleshed out to be honest. But, given the genre, maybe I'm the one in the wrong for thinking that way.

**This release is available digitally now on Bandcamp here!**