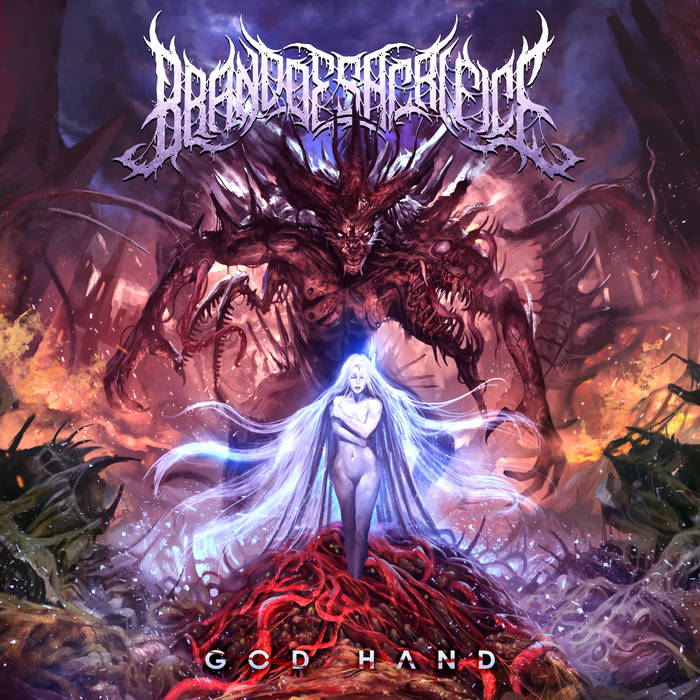 God Hand
by Brand of Sacrifice

Brand of Sacrifice is one of Toronto, Canada's up-and-coming hidden deathcore gems that strive to take on a technical perspective in their brutal music ventures. The relatively new and lesser known five piece band has a hell of a lot to live up to as far as the scene itself goes...and they're showing off their fortitude and abilities through this new full-length album, which also happens to be a follow up to their last EP titled The Interstice. Let's bring the noise!

The new album by Brand of Sacrifice is a stellar mixture of technical elements, some proggy core riffs, deathcore and slight downtempo influences. The thing is, the release is only around 25 or so minutes in length, with ten songs total (some of which are more filler tracks than anything) comprising the base of it. Aside from that and the Par Olofsson-esque art cover that seems all too familiar as far as the genre goes: God Hand (no relation to the cult PlayStation title of the same name) is being released through Unique Leader Recordsand was also mixed/mastered by the band's guitarist and has artwork courtesy of "Lordigan".

As stated beforehand, the core of this release is really engaging and nearly flawless in my eyes and to my ears in terms of all aspects ranging from production quality and tone to musicianship and energy. However, the only real gripe I have with it is just how damn short it is. It doesn't help that a few of the songs are either instrumental or build-up/intermission filler tracks (such as 'Hill of Swords' & 'After Image'), either. God Hand also starts off with a brief intro track consisting of some feedback followed by a few riffs and blast beats that end abruptly.

As far as the other songs go, the two "focus" tracks known as 'Divinity' and 'Fortress' are singles that really make a good impression for the artists involved and show off just what you're in for here. Their formula involve mostly chugging and slam riffs played over atmospheric scores and background tech melodies akin to stuff like Within The Ruins and while at the same time utilizing many studio and guitar effects. The vocals are your typical blend of gutturals and low screams that accompany the madness. Most of the standard core breakdowns are usually reserved for outros or progressions more than anything.

I also really enjoy the proggy structure in songs like 'Fortress' as well as 'The Branded', which feels more like an oldschool type of deathcore song that focuses heavily on chuggy breakdowns and vocal energy. 'Hill of Swords' feels fully like a film score and 'Claw Marks' is a really aggressive track that sadly ends just about as quickly as you can get into it. 'Beast of Darkness' is my personal fave just for how epic it is with its surprising bridge and satisfying end breakdown; and the outro song also had some high points as well. 'Charlotte' is a song that I could either take or leave, though. Overall, however, quality over quantity factor is definitely present here. The cosmic themes also usually win me over at some point, too.

In general, Brand of Sacrifice's full-length God Hand is an overtly technical and sometimes melodic record to boot that manages to go a long way in terms of quality. However, the album's noticeably short running time also holds it back at points and leaves listeners feeling teased in a way and wanting more. I know I really wanted to hear more by the end of it...so I listened to it a couple of more times with no regrets. It is a textbook definition of 'short, but sweet'.

For Fans Of: After The Burial, Organectomy, Shadow of Intent