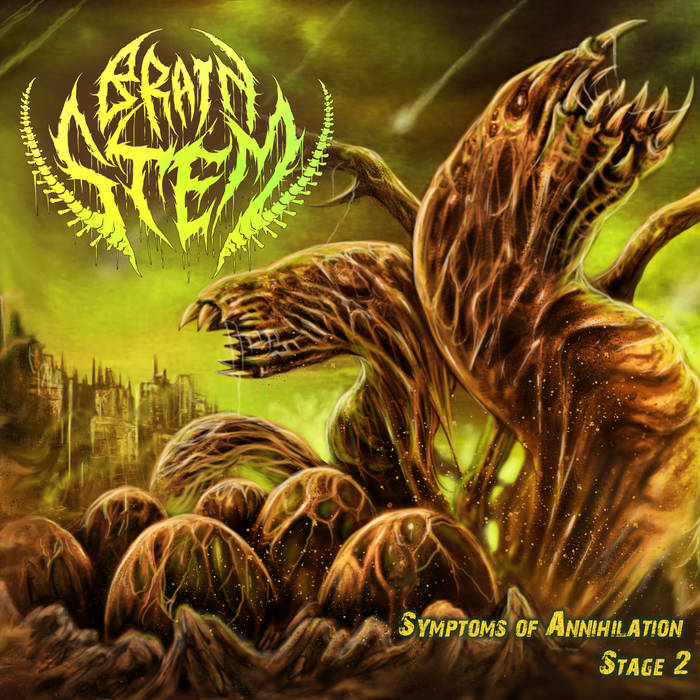 Canada's very own Brain Stem stands as a new unsigned local act born out of Edmonton, Alberta that unconventionally manages to one-up the brutal death scene in their obscure, yet killer four piece ensembles...or EPs rather in this case. And, although I haven't got around to listening to the first part of this two-parter release that came about in 2016 (though I may have to change that quick after chowing down on this one), I'm more than happy to talk about this four track effort right here. So here it is: Symptoms of Annihilation - Stage 2.

The start of this EP sounds pretty oldie at first, with a ton of looping 90s death metal riffs mixed in with some fast paced brutality and some pretty familiar brutal death gutturals we've heard many times before. The first song didn't do much for me, but I'm glad I kept listening on, because past that, this one really evolves into a cracked out, fun little listen with a ton of tempo changes, riff salad mixed in with brutal blasts and some vox destruction in the vein of stuff like Dying Fetus thrown in, as well. The second part of this EP is really more formidable than the former, with tons of killer songwriting on display, particularly in the guitar department with some surprising bass action in the third track and even some really catchy and all-out core-esque downbeat and dark, sludgy, chuggy breakdowns rearing their ugly head into the outro song 'Dawn of Rot'. There's even one really unexpected slow-moving clean interlude in that last track that stuck with me in a good way, as well. There's a lot to like about this one despite its somewhat repetitive at times opening. It's fast paced, got killer death metal ambiance and riffs from all accounts, isn't afraid to branch out in style and has those oldschool brutal death vox you either love or hate.

I really thoroughly enjoyed much of this new EP for what it was in nearly every step of the way. From its consistently brutal instrumentals, particularly in the spastic yet rhythmically complex guitars mixed in with the occasional groovy bass overdrive lines, blast beats and odd time signatures and section changes throughout. The riffs really are on point and the songs take their time to evolve and progress into some insane brutal death crescendos, with some slam and techy riffs thrown in, too. This one is largely a call back to stuff like the oldschool Demilich or the more destructively ignant Pungent Stench, Disgorge and the like. It's a fine listen for those wanting to sink their teeth into something slightly technical, but consistently brutal from start to finish with some nostalgic rhythmic vibes to boot.

Fave Track: Tie between 'The Unspoken Ire' & 'Dawn of Rot'

**This release is available now on both digital and physical formats here!**