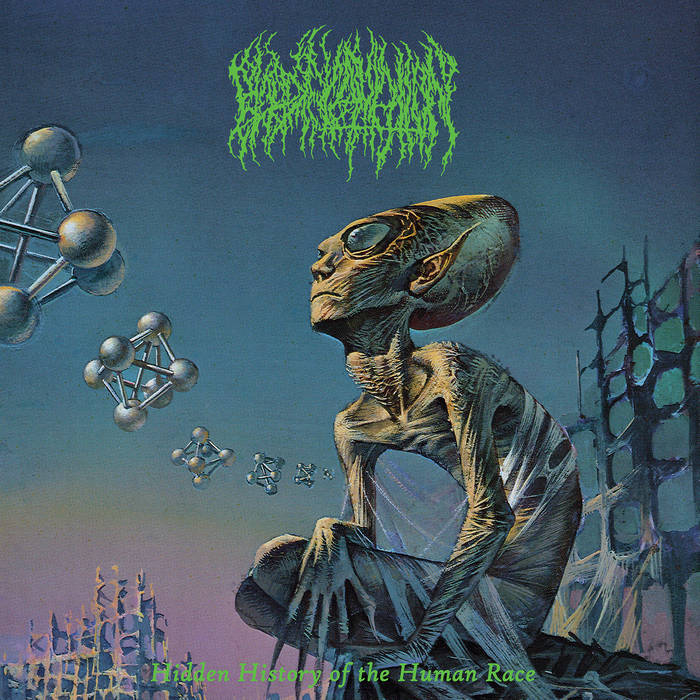 Hidden History of the Human Race
by Blood Incantation

In following the running theme of Rocky Mountain state-based bands having unorthodox or slightly "out there" elements in their brand of extreme metal (which is just that in its own right but I digress), this band highlights some fairly stellar stuff that is usually lacking in the genre. Denver, Colorado's very own Blood Incantation, not to be confused with the similarly named NY band, is an ecstatic four-piece outfit that's meddled in discussing the paranormal and legends of outer space, namely the Anunnaki alien race, while tying together their techy, sometimes progressive brand of death metal. And, since their 2011 inception, they've released two full-length albums, an EP, a split and even a live album to put under the band's belt.

But now, the time has come to talk about their sophomore album, Hidden History of the Human Race, a four track follow-up to their debut Starspawn and a release through the Dark Descent Records roster. Notably, there is featured cover artwork taken from Bruce Pennington's sci-fi works and mastering work by Pete DeBoer, who's worked with a few other death metal artists. There's also a guest spot by Finnish death metalhead Antti Boman, most notably the frontman/vocalist of oldschool band Demilich.

This 36 or so minute offering to the cosmic deities sets off on a rather unconventional journey, though I will say that it works to the band's own advantage most of the time. More specifically, while there's only four songs, they're all damn long...with the fourth and last one being around eighteen minutes. One is purely an instrumental sort of techy aliencore effort while a couple of others have some atmospheric buildup or melodic sections to them, as well. 'Slave Species of the Gods', the opening song, offers some chaotic guitarwork in the intro juxtaposed with oldschool 90s dreary, cookiemonster-esque vocals that have somewhat of a low-fi vibe to them. Artificial harmonics, trills and occasional chromatic riffs make their presence known and double bass is abundant, as expected. Honestly, as a whole, this release is a lot more instrumentally focused as opposed to vocally, which I can definitely respect. It's kind of a death metal guitarists' wet dream at times with the level of technicality. Think of like NILE but for outer space instead of ancient Egypt to give yourself an idea.

The relentlessness continues with 'The Giza Power Plant', which is my personal fave because of the oddly enough conflicting guitar lines that give off an otherworldly vibe at times. There's a couple of guitar solos in there as well and the song even takes a really surprising turn a couple of minutes in to give way to a melodic riffing section akin to the familiar sound of the aforementioned NILE. Even the low growl type vocals remind me of songs like 'Sarcophagus' by them. This song really feels fit for an epic with how it flows like a death metal ballad in the middle portion before going into a lightning fast outro. 'Inner Paths', the third track, is an instrumental with a really drawn out buildup to some oldschool death metal riffs and atmospheric backdrops in the UFO theme (if you listen you'll know what I mean). It's a song I could take or leave and felt a little bit like a filler with how slow it felt. The final song puts guys like Opeth and TOOL to shame with how obnoxiously lengthy it is.

A lot of the content is good, which I won't give away too much of at this point, while some other stuff, which felt like recycled ambiance or material from previous songs, could've been cut out. I'll just say it ends off on a high note and there is some guitar high note and guitar solo action to admire. On a side note, the finicky snare drum sounds are really a good fit, intentional or not.

In all, the latest release from Denver space death dudebros Blood Incantation has a lot of things I like about it. For one, the ambiance really aids to give off the feeling of the underlying themes and the melodics do a great job at juxtaposing with the lightning-paced chaotic guitars and drums. The vocals that are on here are nostalgic and slightly reminiscient of older bands in the genre, though I understand they're going for their own sound. I sorta wish the vocals had a bit more variety and a little more could've been done with the guest spot, but this is still definitely a solid performance all around.

Certain parts of Hidden History of the Human Race feel a tad progressive with the overall structures and riff transitions while others are either technical like Gorguts or just all out chaotic for the sake of obliterating the senses. I can honestly recommend this to any metalhead who's even slightly into the death metal sound because of how flexible and varied the elements on this album are. It's great sci-fi themed tech death with a few oddities that work to its advantage, ultimately making it, to some degree, truly memorable.