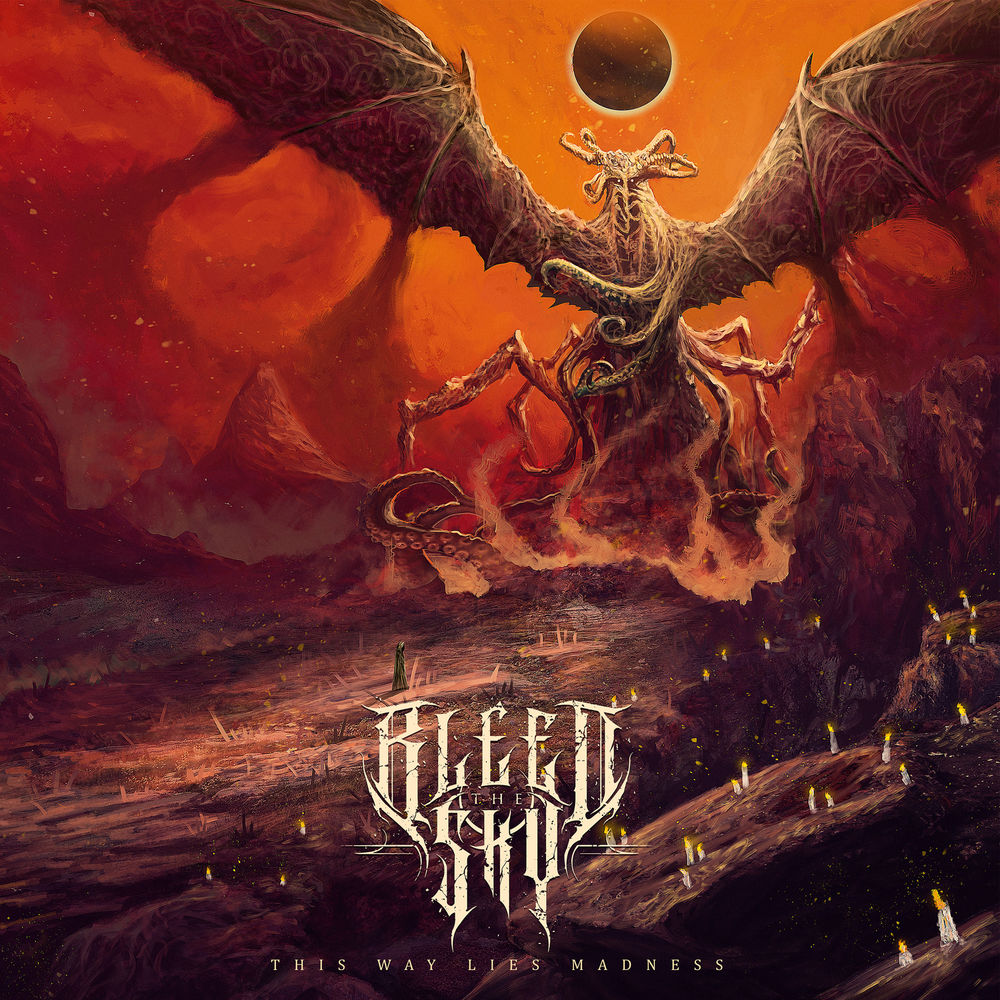 This Way Lies Madness
by Bleed The Sky

The MySpace era of metalcore and deathcore, in its purest of forms, is a distinct and genuinely nostalgic soundscape that I'm sure many a metalhead and follower of Metal Trenches has grown up or been engrossed in at some point in their life. Bleed The Sky stands as just one of those American metal outfits (based in California) that helped shape a foundation of a genre and consequently became largely an influencer of the core sound to other bands of the mid 2000s prior to splitting up and going the way of obscurity oblivion. However, as you might have guessed already, they're back now and perhaps better than before as a five-piece group releasing their third full-length album titled This Way Lies Madness through Art Is War Records right before going on tour. So, without any further interruptions or minor details, it's time to dive right into nine songs filled with some pretty groovy and hard-hitting tunes in the vein of oldschool core stuff like Threat Signal and Knights of the Abyss with some subtle hints of some pretty eclectic, melodic substances such as Gojira in addition to some other influences that are considered 'trendy' in today's metalcore jams like the djenty stuff.

This album really serves as just a whole lot of fan service and the like for oldschool core and metalheads into the late 1990s/early 2000s metallic hardcore and deathcore craze. There's songs chock full of chugging open note breakdowns, high shriek vocals mixed in with low growls, a slightly proggy djent backbone at times akin to Volumes and the ilk, and some fairly melodic aspects as well. The self-titled track stands as an opener for what to expect a bit of the time, with a generally chuggy guitar and grating vox sound that leads into a longwinded breakdown section that gets recycled throughout the song with not much else to mention. 'Ghost' and 'Serpent' were two tracks that really stood out because they felt like more my speed with their vocal variety, distinct fast paced shredding energy and unconventional progression with some surprises like an interlude filled with ethereal chanting or harmonic auras. These aspects, as well as a guest spot in 'Carrion Bather' that was pretty solid, helped keep the release afloat for me. On the other hand, some songs like 'Tongue Louse' dragged on way too much and 'Membrane' was pretty much just a throwaway filler track with some half-decent drum & bass lines put together for a minute or so. 'Age of the Basilisk' was another fairly ecstatic song for me, but I wish it had more to it in terms of the guitar riffs or melodies. Maybe a solo or two could've worked. Ultimately, some songs feel a whole lot like the band's old MySpace style (sans clean vox for the most part); while others feel like they're trying something new by adding modern takes to the oldschool formula. It sticks alright, but feels wonky in some parts, leading to some inconsistent structures overall.

This Way Lies Madness ultimately feels like two halves of a whole album that really try to mix it up a tad too much, sometimes at the expense of its consistent tone, structure and hard-hitting early 2000s metallic hardcore vibes that seem to clash frequently with a conflicting overtly melodic and slightly mainstream aura. The sound is pretty familiar as far as the rest of their discography goes, with some minor surprises to be had with a reunited lineup and a newfound sound to boot. A few of these high points included the nostalgic ending breakdown in 'Ghost' as well as the Steve Tinnon (Silence The Messenger) guest spot on 'Carrion Bather' and that catchy melodics section in 'Serpent'. However, a lot of the other stuff is all too familiar and, while fairly memorable and nostalgic altogether, it ends up a tad repetitive in the long run. I will say to check it out if you're a fanatic of oldschool MySpace era core/metal along the lines of the bands mentioned earlier. It's still nice to see an OG band have a comeback, though.

For Fans Of: MySpace metalcore/deathcore