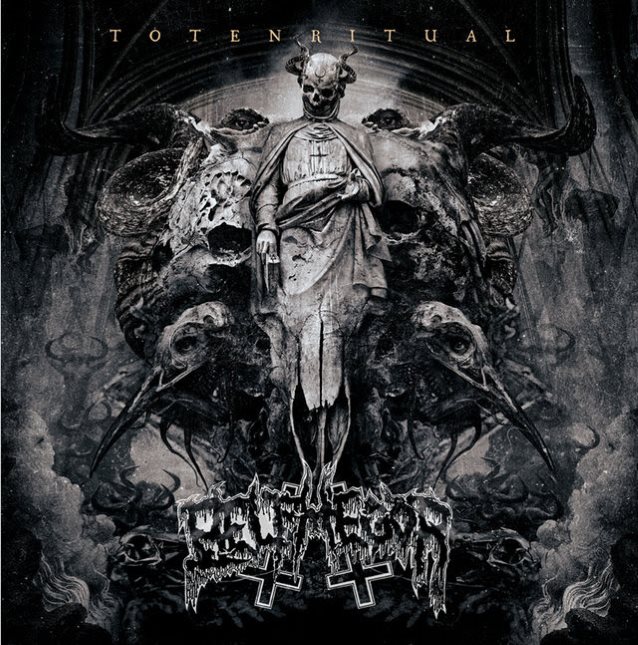 A suitably dark addition to the blackened death metal formula

Background: Black metal, as a genre spawned from heavy metal, has several distinct continuations or subgenres that followed in the years succeeding its foundation. These include the likes of the atmospheric/instrumental, symphonic, depressive and operatic varieties. Some bands, however, sought to merge the confines of black metal with the many aspects of death metal...consequently forming a subpoint known to most as "blackened death metal".

Band History: Officially started in 1993, following a name change from "Betrayer", Austrian metal band Belphegor has become notorious for doing just that: blending both dark, black metal elements with heavy, brutal death metal attributes. The group consists mainly of frontman Helmuth, who does vocals and plays guitar, Serpenth, their bass player, and drummer BloodHammer. Since their formation, Belphegor has released around a dozen studio albums and some live records as well, under the labels Napalm Records and Nuclear Blast. In their music, the artists incorporate aspects of ambiance, death metal riffs, blackened vocals, and more.

Album Breakdown: Belphegor's latest offering, titled Totenritual (roughly translated to "Death Ritual"), serves as yet another one of their additions to the blackened death metal world. As appropriately dark as their previous records and now with even more brutal death metal influences than ever, this new album truly does their other works and the genre of blackened death metal genre justice. In addition, Totenritual introduces a new concept and a few new interesting ideas to the old formula.

Pros: The guitar riffs throughout the album are copious and entertaining. It's got slams, tremolo picking, some solos here and there, etc. The drumming is fast-paced and adequate to the music. Also, the vocals are properly dark and fitting this time around, with none of the gimmicks present in other works. Straightforward blackened death metal, but with a twist, Totenritual offers a theme revolving around a ritual involving sacrificing one's self to the dark side. Everything fits in together perfectly and the structuring is brilliant, with lots of transitions and changes in flow.

Cons: Some of the few negatives in this album are the lack of vocal variety and innovation in the guitar solos. Also, the bass lines aren't very audible. Just a few little nitpicks for this here album.

The Verdict: In conclusion, the newest album by Belphegor, Totenritual, is an intruiging one to listen to and to analyze for its dark concept. Once again, the band has succeeded in continuing their journey and career in the realm of blackened death metal, as this album will definitely hold up and be regarded as a solid addition to their discography. Totenritual possesses very few and far-in-between flaws, and the release's positives greatly overshadow these faults. Through listening to this new offering, one can clearly determine that Belphegor is a band that is far from losing its luster in the world of heavy metal.