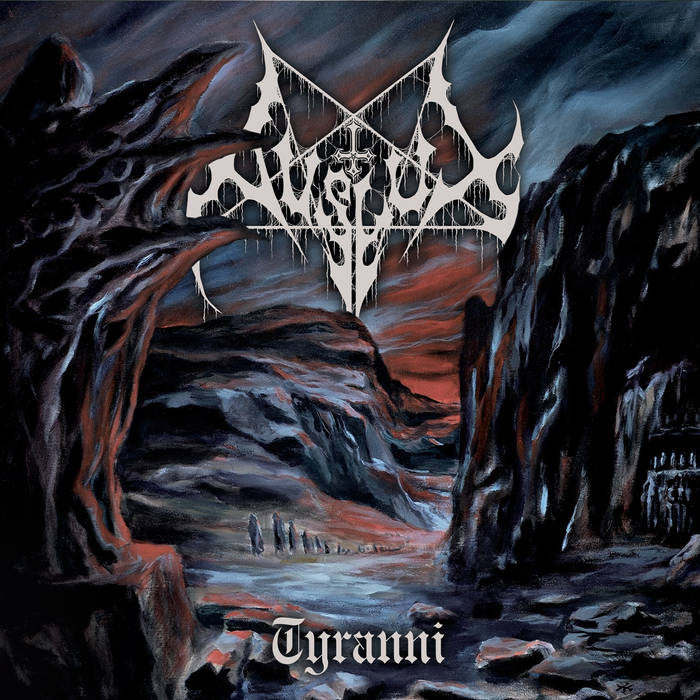 Delightfully dark as ever, blackened death continuation of a nearly perfect, epic formula

Avslut is one of those so-called Swedish black metal bands that we've covered on the site before with the delectable Deceptis debut full-length album from 2018. Now now, although they brand themselves as black metal, this is not entirely the case, as the melodic death metal and OSDM influences take a heavy toll with these hitters. Born the bastard sons of Stockholm just a few short years ago, the five piece outfit (whose individual names are a secret and merely referred to in letters) has already gained somewhat of a modest cult following from the underground extreme metal community. And now, they're back and perhaps in a now better form than ever with their latest follow-up album Tyranni ('Tyranny'?): A nine track effort that offers up over 47 minutes of blackened death madness via their record label Osmose Productions. The time for darkness is upon us now...

The opening wastes little to no time to get started with some fast open note and power chord shredding akin to the kvlt-esque crowd right before that familiar mid blast beat and the shrieking vocals we're all used to by now make their way in. There are some rather catchy octave chords and high note tremolos in there as well as some symphonic elements to boot. This is a very melodic one also, perhaps more so than its predecesssor. The madness slows down a bit in the middle portion of the self-titled intro track prior to going back into a trance-like chorus, more blast beats and double bass and an alright solo finish. Next up, we get to listen to a brief audio sample that leads into 'Stigens Ande', a very oldschool sounding black metal track with some chanting sections as well as some background ambiance. The melodies continue until allt Forgas, which starts out on a very atmospheric note right before going into a more chaotic instrumental section near its outro. The songs that follow are a lot more quick death metal-esque with a lightning pace, making melodics merely for the outros. 'Underjorgens Apostlar' even starts out with a borderline brutal death riff and includes a pretty cool guitar solo later on, as well. The structure and emotion of the last three songs, specifically 'Drap', were really my speed and had a solid mix of everything else you've heard thus far, namely the melodics/symphonic aspects in addition to those crazy tremolos once again.

Avslut has outdone itself once more with the release of Tyranni, which is as solid a black metal/slight death fusion offering as can be. It contains the right amount of various death and black metal elements throughout, making it sound low-fi, kvlt, mellow and sometimes dark and brooding as ever. More or less, this one is a continuation of what is, in my opinion, a near perfect and somewhat epic formula that I really hope continues going forward. If it ain't broke, don't fix it.