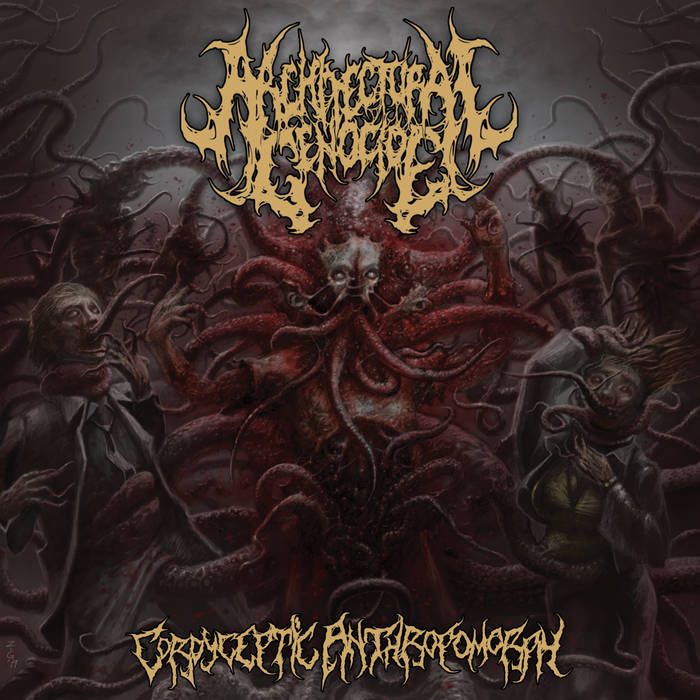 Coming off of the brutal heels and fierce backbone of the somewhat legendary underground Comatose Music label, today's act known as Architectural Genocide has quite a bit to live up to and show off with all the oversaturated slam and general brutal death bands around these days. Long story short: they're a brand spanking new band from the heart of Houston, Texas that previously released a brief ten or so minute demo back in 2018. And now, this heavyhitting quartet is making their first big mark with their debut full-length titled Cordyceptic Anthropomorph (now THAT's a mouthful!). We've got eight tracks and forty minutes of brutally dissonant and ignant content ahead of us now...so let's get right down to it.

The album blasts off to a rather typical if energetic intro comprised of some salad death metal riffs accompanied by some blast beats and the usual longwinded growl that starts off the release. Then we have ourselves a slamming riff with some variations that lead into a Condemned or Disgorge styled song that kinda overstays its welcome as the riffs don't really change much past the first minute. It's catchy in its melodic grooves and slammy chromatics, but not much else after that. The second song takes it to a new level with some melodic string action packed with double bass and Pathology-esque brutal death composition that even includes some squeals in the background. This one felt like more my style because of its constant fast pace and more various ensemble of riffs aside from the usual slams. The album does get better as it progresses, as with tracks like 'Gorge on Deceased' as well as 'Pleasure Induced by Agony' (another personal fave of mine) showing off the band's more fast paced brutality and experimentation with artificial harmonics, punching slams in between, tremolo sections mixed with percussional madness and abrasively destructive slam gutturals throughout. The album's solid technical backbone mixed in with the oldschool atmosphere and new age slam tropes makes for a decent listen.

At the end of the day, this new little release had a lot more techy and straight up oldschool 90s brutal death (in the vein of material akin to Deeds of Flesh or Suffocation and the like) than I initially anticipated. And, though it immediately comes off as fairly standard within its own league as the first track or two rear their heads, Cordyceptic Anthropomorph eventually evolves into something a bit more than it let on from the start with its rather memorable riff action, somewhat grindy musical transitions mixed in with death metal aura, and low down guttural vox that reminded me of the oldschool stuff, as well. Architectural Genocide show progress and ambition in their drawn out and inspired new debut full-length, now let's hope they can use those attributes to develop similar types of hard-hitting and somewhat eclectic releases in the near future.

For Fans Of: oldschool death metal, technical brutal death in the vein of Decrepit Birth or older Defeated Sanity