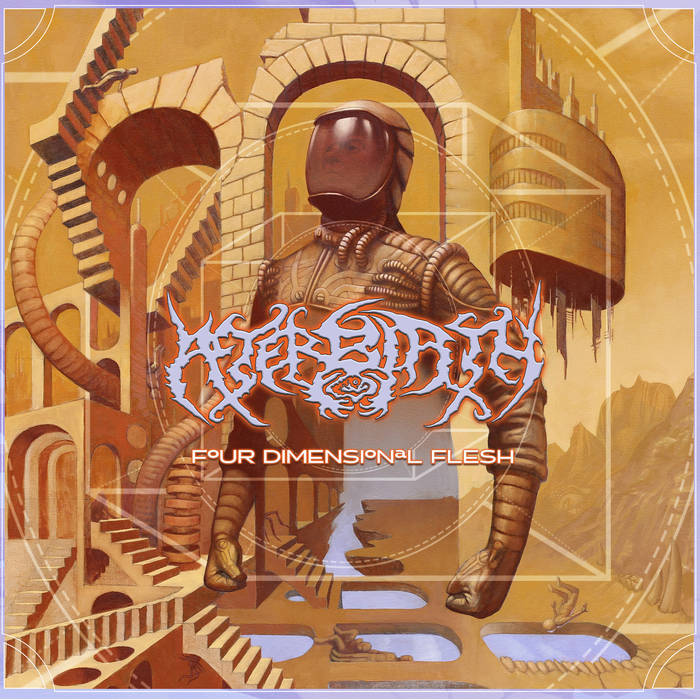 A bit psychedelic, proggy and techy at times, this new brutal death effort hits all the right notes

New York's finest in the realm of death metal returns today in a new installment featuring Long Island's longstanding outfit Afterbirth. First formed in the early 1990s as a death and gore-obsessed brutal death band, this oldschool four piece has started out their career with a few demos and shows back in the day before going largely inactive for several years to focus on other ventures and musical projects. It wasn't until around 2014 that they made a comeback with another demo that soon led to the release of their debut full-length titled The Time Traveler's Dilemma in 2017. And now, they're back once again and they now have their sophomore album Four Dimensional Flesh (released via Unique Leader Records) under their belt to show off. It's got a whopping eleven tracks, culminating into a total of approximately a little over 35 minutes of content, to listen to. So let's do just that.

Coming right out of the gate and we're treated to some groovy bass lines accompanied by grating guitar chords and some blast beats that lead into a guttural verse. Like several others on this album, the opening track is a fairly short one, but at the same time it's got tons of different vibes. On this album, you'll hear some truly eclectic and otherworldly guitar lines packed with some insane auras and those sleazy, deep slam vox you either love or hate. The song structures and durations are pretty varied, but on the shorter side for the genre, though this is all made up for in quality. The clashing instrumentals make for a good time in the midst of all the squealing vocals, occasional harmonic/melodic sections and even deathcore-inspired breakdowns thrown in there for some good measure. There are also even a couple of short melodic instrumental tracks at the end of the album that reminded me of more proggy, atmospheric content in the vein of The Contortionist that seek to sooth the body and soul and to break away and act as, well, a break from the rest of the over-the-top brutal death stuff in here. Some of these may seem out of place, but they're really catchy on their own.

While I thoroughly enjoyed this release throughout, I took a notable liking to the various eclectic guitar riffs that were composed together as well as the differing song structures, transitions and lengths that mix up the vibes found on Four Dimensional Flesh. Certain tracks gave me more of a Decrepit Birth vibe, oddly enough, while some others were more reminiscient of the material linked to bands like Artificial Brain in terms of the technical and sometimes psychedelic aesthetics (another project related to Afterbirth) or Internal Bleeding when it comes to the slam-influenced guttural vox. Yeah there are one or two filler tracks I didn't much care for, but those aside, I found some enjoyment also from the couple of cool instrumental tracks. But overall I thought of this one as a more than formidable sophomore offering that builds upon its predecessors and hits all the right notes by putting together a few different types of sounds into a more than modest running time for a brutal death release. Generally, this is one I see myself coming back to a lot as time passes.