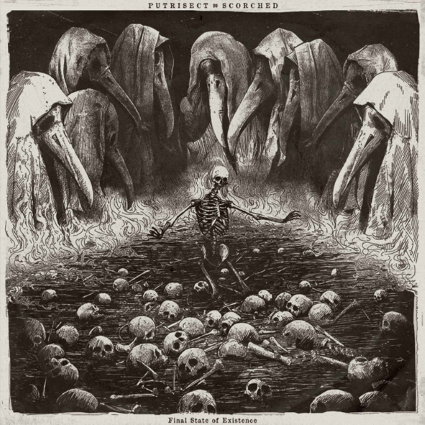 Final State of Existence
by Scorched/Putrisect

Putrisect of Baltimore and Scorched of Delaware have joined forces to bring us one thing, and one thing only: death metal.  Along with that killer artwork that reminded me a little of an even more morbid vision of the Skeksis from The Dark Crystal, this is a package ready to drag you straight to metal hell.  Much like the style of the music, I'll keep things short and simple.  No need for a lot of poetic metaphors or fancy words; this is simply DM by the numbers.

And yet for the legions of bands who attempt to break into the classic style of death metal, few do it so well as either of the groups on display with Final State of Existence.  The tremolo lines are all perfection, each guitar squeal perfectly placed, and the double bass more vile and aggressive than a bulldozer covered in gore.  I can't really pick a favorite track as they are all equally impressive in terms of sheer enjoyment.  Furthermore, Putrisect and Scorched have a similar enough sound between them to make this a pretty consistent split.

Both seem to be fans of the old school D-beats united with tremolo-picking fast enough to shred fingers to the bone.  And even when things slow down with the doomier moments of "Final Cleansing," the atmosphere is dark as ever and a pace change is never too far around the bend.  If we were to split hairs though, there are a few ways to tell the groups apart in their quest for slaughter.  Scorched has a deeper, slightly more cavernous vocal delivery, for one.  But the real signature stroke of are those killer basslines that rumble to the front of the mix on the last two tracks.  Gun to head, "Lust For Strangulation" might just barely edge out the other tracks partly due to these additions.

Got 20 minutes?  Why not spend it getting your bones broken by some no-frills death metal from two more killer bands in the genre?  I get a lot of run-of-the-mill groups from both the DM and BM camps in my email on a daily basis.  With the few gems that usually stand out due to their level of innovation, I always find it particularly important to highlight the rare moments when something more stimple still manages to infect my eardrums.  Like a bacteria, Final State of Existence spread with its first listen, only to subsequently remind me through later aches and pains that I might need a doctor to get it out of my head.