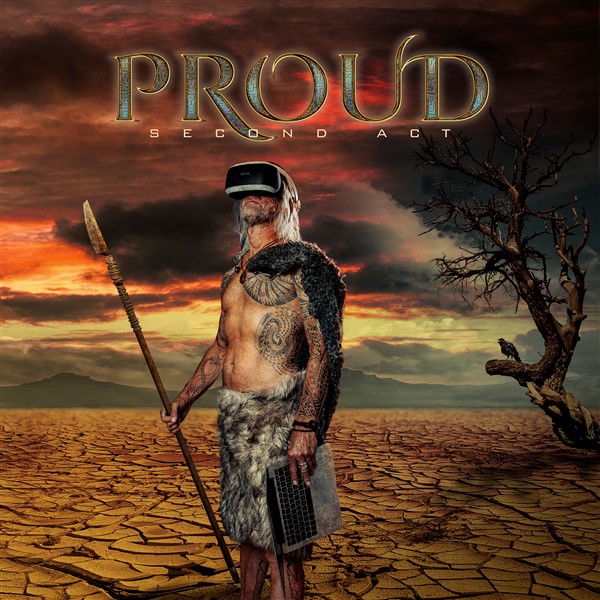 For fans of melodic rock and heavy metal, the past decade has brought plenty of new music from bands that had been dormant for quite some time.  Whether they had taken an extended break or had only released one album in the 80s before disappearing, more and more seemed to be reuniting out of nowhere with the goal of recapturing that classic sound.  One of the more surprising reunions comes courtesy of Sweden’s Proud, who released Fire Breaks the Dawn in 1984 and a demo in 1985 before going dormant for three and a half decades.  With original members Anders Magnell and Bobby Horvath leading the charge alongside a new drummer and guest keyboardist, Proud’s latest album Second Act leans a bit more towards melodic rock/AOR than the heavy metal of its predecessor, but still provides plenty of soaring hooks that will stick with listeners.

Where Fire Breaks the Dawn leaned more heavily into hard rock and NWOBHM, Second Act transitions towards a melodic direction that brings bands like Journey, Europe, and Survivor to mind.  That’s not to say that Proud has entirely lost their bite though, as this is still a very guitar forward album and songs like “Crying in the Night” bring back that heavy metal edge with fiercer sounding riffs.  I’m sure those that stumbled upon a vinyl copy of Fire Breaks the Dawn at some point and regard it as a lost classic could be disappointed by the shift in sound, but given the strength of the writing that didn’t prove to be an issue for me.  “Sail Away” starts things off with immediate hooks, as an atmospheric intro gives way to warm guitar melodies and keyboards that soar on the choruses.  From there Proud continues to alternate between songs that are keyboard dominant and ones that emphasize the guitar a bit more, moving seamlessly between softer AOR where the melodies fill the room and ones that have more of that low-end rumble and aggressive edge that defined 70s and 80s hard rock.  Admittedly the material does peak for me around the three-quarter mark, and while the material is consistently enjoyable from beginning to end upon repeat listens the last few songs don’t stick out in my mind quite as much as the rest.  I also found myself most drawn to the faster tempos, as the aforementioned “Crying in the Night” and “Magic” are sure to captivate anyone that gives this album a listen.

Sometimes when bands from three or even four decades ago reunite with pieces of their original lineup, their vocals suffer a bit and can’t capture the same range as in their prime.  But Proud has nothing to worry about here, as Anders Magnell’s voice is in perfect form and perfectly suited for the approach the band is going for on Second Act.  He has one of those commanding voices that seems to boom out of your speakers whether he’s soaring towards higher ranges on the choruses or slightly lower ones with a bit more bite on some of the verses.  Proud layers their vocals on many of the choruses to create the types of harmonies that would’ve dominated airwaves back when this type of rock was all over the radio, and that’s a great thing.

Proud’s comeback thirty-six years after their last release might head in a slightly different direction than some might have expected, but the move towards melodic rock/AOR works in their favor.  With just the right mix of keyboard driven melodies that have a prog edge at times and some dips into hard rock and heavy metal, there’s a lot to like about this album even if it does slightly run out of steam by the end.  Hopefully this is just the beginning of this second incarnation of the band, as they seem poised to get some wider recognition.  Second Act is available from AOR Heaven.