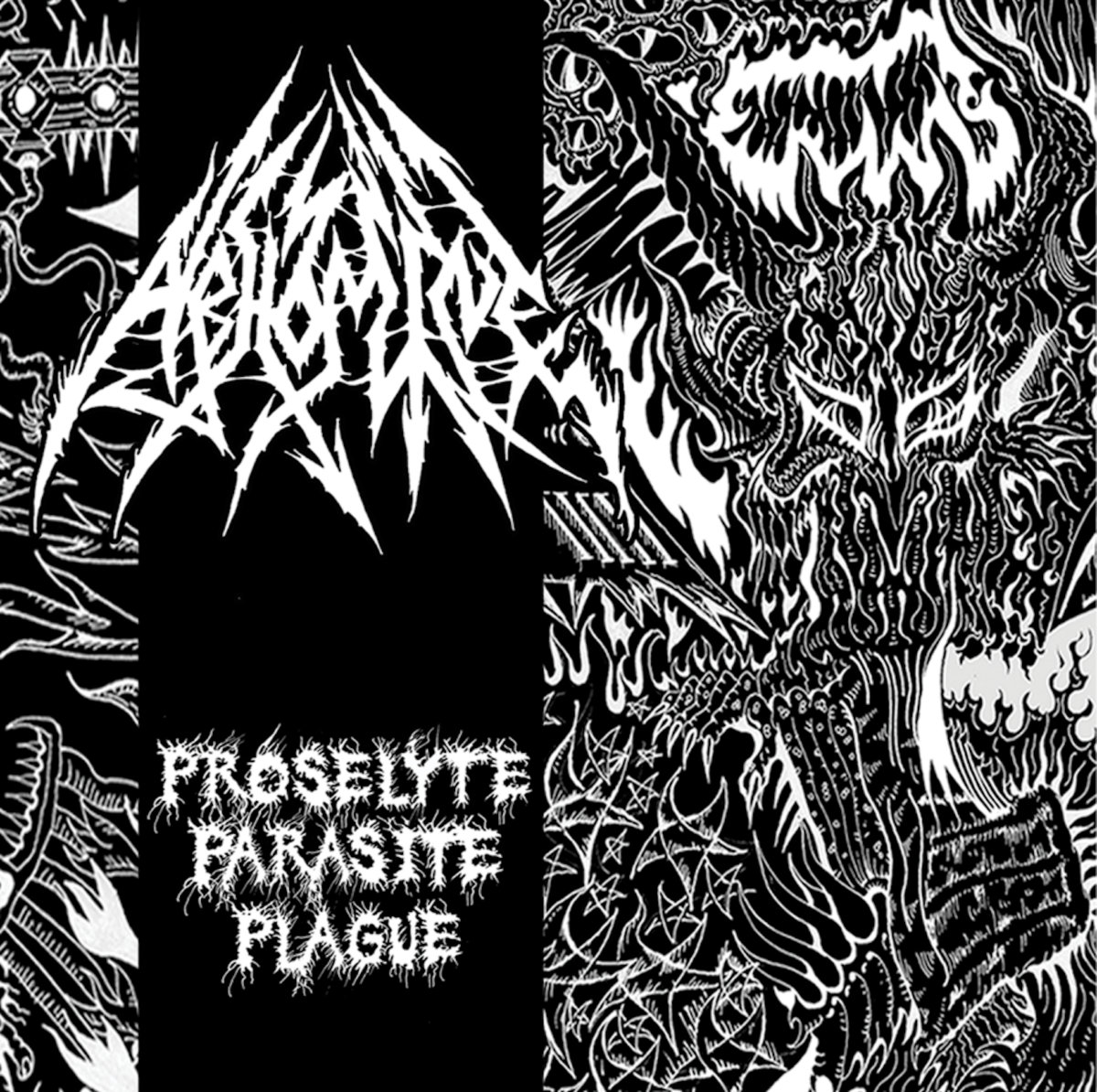 A few years have passed since Pete Helmkamp released his debut solo effort under the Abhomine name, which saw the former Order From Chaos and Angelcorpse member writing stripped down black/death metal that went back to a more primitive and barbaric approach to the genre.  In the time since Helmkamp has kept busy playing shows with a reunited Angelcorpse and Kerasphorus, and with both of those winding down he’s returned to Abhomine once again.  This time around he isn’t alone though as Cazz Grant (Crucifer, Grand Belial’s Key) has joined on drums and vocals, with the resulting effort Proselyte Parasite Plague once again going for the throat with stripped down production values and fast paced riffing.  While it may not stand out as much as either member’s past endeavors, hopefully this collaboration is just the beginning as there remains further potential still to be explored.

2016’s Larval Offal Swine was already on the short side but Abhomine has kept things just as brief for their sophomore release, with the six songs flying by in a brisk twenty-three minutes.  The instrumentals cover a decent amount of ground in that period of time, with the guitar and drum work often coming through with rhythmic variation beyond simple blasting.  At times the galloping pace of Grant’s drumming and the tonality changes in the guitar are reminiscent of both Order From Chaos and Arghoslent in equal capacity, along with a slew of other black and death metal influences from the 80s and early 90s.  Listeners are likely to find the mixing to be a point of contention, as this is a very drum and vocal focused record with the guitar and bass work ending up a bit muffled in the background, which does give off a decidedly old-school vibe but buries some of the nuances of each tracks on purpose.  It’s an approach that make sense given Abhomine’s pedigree, but it does have a rougher around the edges feel that may turn some people away.  With that being said though, it does feel like there’s something missing from Proselyte Parasite Plague that keeps it from reaching the same heights as the other bands these guys have been involved with.  Despite the tempo changes and the sheer brute force on display, the songs start to feel like they’re following a similar approach by the end and don’t stand on their own which does dull the overall impact.

Helmkamp and Grant trade off vocals regularly throughout each song, which is one of the main appeals of Abhomine’s latest album.  Both have fairly recognizable pitches, and the interplay between Helmkamp’s raspy, stretched out screams and Grant’s nightmarishly low growls makes the material hit with so much more power than your average black/death metal effort.  Given how strong the performances are it makes sense that Proselyte Parasite Plague has put them front and center in the mix and allowed the vocals to dominate as opposed to getting buried underneath the walls of abrasive riffing, and this works to Abhomine’s advantage.

Pete Helmkamp’s latest channels some of his earliest exploits, with the riffs recalling the shifting nature of Order From Chaos and the rawer qualities of some of the best old-school black/death metal albums.  The writing does fall into a bit of a formula across the six songs and there aren’t quite enough standout riffs that truly make individual tracks distinguishable, but the killer vocal performance and bludgeoning nature of the instrumentals will still help this album to appeal to listeners who can appreciate this type of metal.  Here’s hoping that Cazz Grant is a permanent addition, as there’s still untapped potential for Abhomine as a duo.  Proselyte Parasite Plague is available from Hells Headbangers and Osmose Productions.