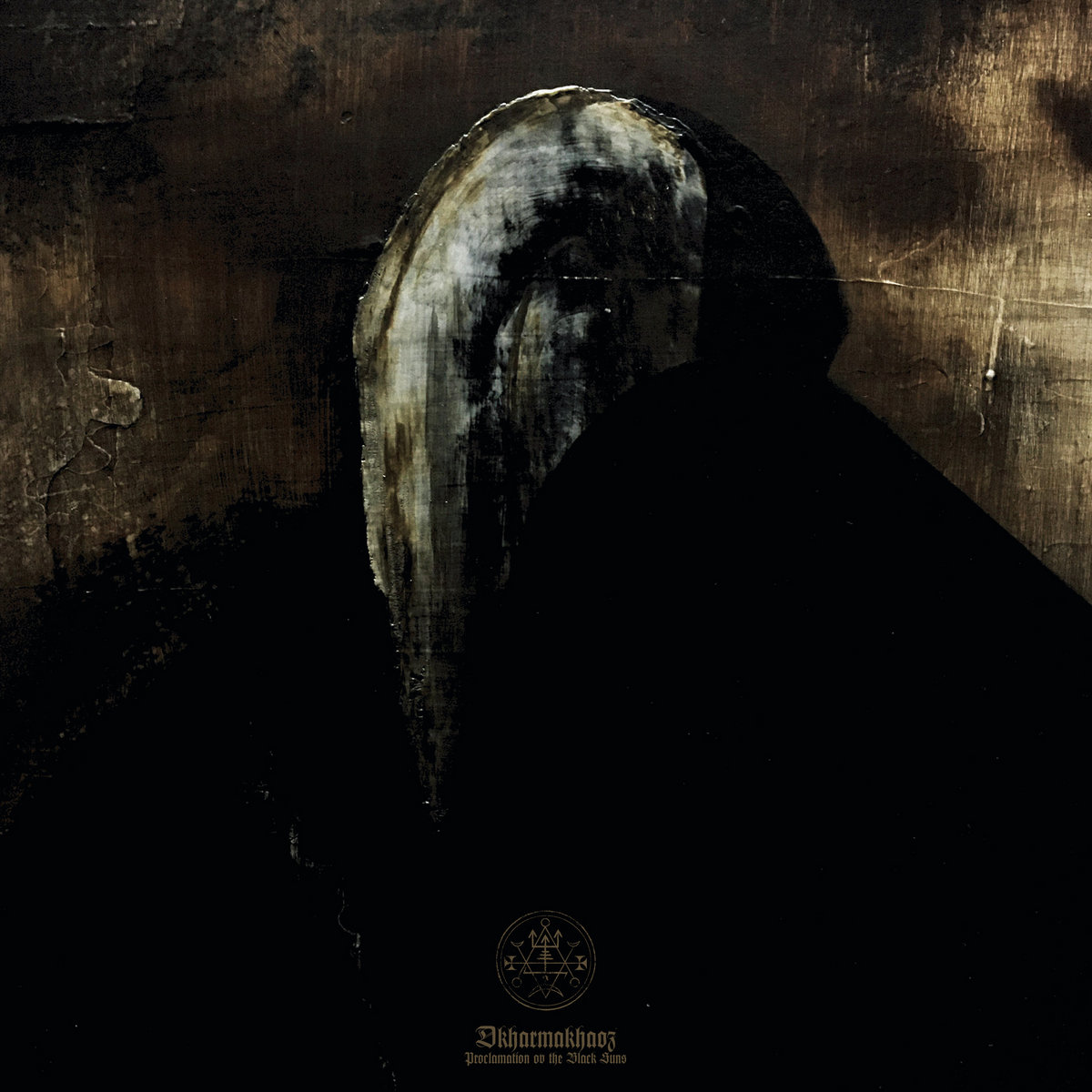 Dkharmakhaoz is a new black metal duo hailing from Belarus, who like quite a few of the newer acts to emerge in recent years has chosen to remain cloaked in mystery and let their music do the talking for them rather than revealing their identities.  Where a lot of black metal artists from Belarus have tended to offer little more than the standard second-wave worship, on their debut full length Proclamation ov the Black Suns Dkharmakhaoz pulls equally from the genre’s roots while also pushing towards a slightly more modern and apocalyptic sound.  Taking cues from dissonant death metal and crushing doom and industrial while remaining rooted in black metal, this is an album that’s able to captivate listeners with equal amounts of destructive riffing and chilling atmosphere.

“The Cycle ov Omega” starts the album off with the sound of sonar and static, immediately giving off an eerie and apocalyptic feeling even before the instrumentals whip things up into denser blasting.  This song gives a good idea of the type of crushing heaviness and darker atmosphere Dkharmakhaoz is able to conjure throughout the album, as the sheer bottom heaviness of the instrumentals brings some of the more cavernous and dissonant death metal to mind, with the drum patterns sometimes having flourishes of industrial to them.  But the duo doesn’t stop there, as they weave colder and downright haunting melodies over this base that recall black metal’s roots.  It’s a combination of musical styles that all suit each other and keep the intensity level at a maximum even when the group has settled into a lumbering groove.  During certain moments the tonality reminded me of bands like Portal and Thantifaxath, while some of the drum patterns on the slower songs had similar rhythms as Godflesh.  All these elements are likely to come across as familiar individually, but Dkharmakhaoz has merged them together in a way that feels a bit more unique and even alien at times.  Though the blasting and sudden tempo shifts will likely be what initially draws listeners in, the stunning melodic climaxes on songs like “Chthonic Rites ov Fertility” is sure to be what keeps them coming back for more.

While the dissonance and crushing nature of the instrumentation makes a big impression, it’s the vocals that help to make this album really stand out.  Coming in at the higher end of the spectrum, there’s a shrillness and distortion to the pitch that makes them sound cold and alienlike, as if a new race of being has landed in this world and is sending their armies forth to conquer everything in their path.  There are hints of black metal and earlier industrial to the overall approach, and these higher screams are balanced out by some lower growls on some of the songs to create an even more nightmarish sound.  For the majority of Proclamation ov the Black Suns this approach stays the same, though you’ll notice a sudden burst of female singing on “Ascension” which changes the tone significantly but disappears almost as quickly as it appears.  I’m curious if this is an element Dkharmakhaoz might utilize a bit more of moving forward, as it adds to the experimental and unpredictable nature of their material.

This is an album that makes an immediate impression but is hard to pin down, as it has both the crushing power and chilling melodies of black and death metal but has run it through a bit of an industrial filter in terms of the type of apocalyptic and machinelike imagery that comes to mind as you listen.  Despite the shorter thirty-six-minute length, Dkharmakhaoz has given listeners a lot to take in during that span of time and delivered something that hits all the elements fans of these metal styles look for while pushing out towards newer territory.  There’s room for them to expand even further on this darkness and madness, but this is still a hell of a way to start.  Proclamation ov the Black Suns is available from Iron Bonehead Productions.