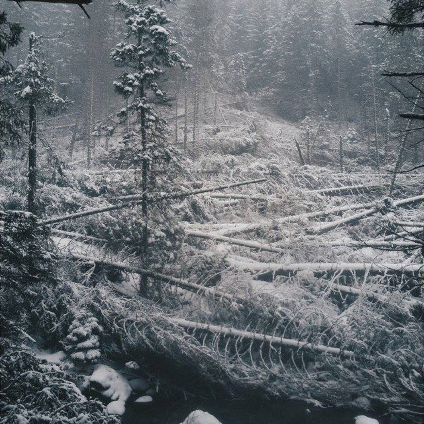 Iceland can be a very cold place, and the unnamed members of Toska have no difficulty portraying this fact.  This new and exciting black metal project is being compared to acts like Dodheimsgard, Funeral Mist, and even Windir.  That's high praise, but I found it to be warranted with this self-titled debut.  The artists describe their music as “an inexplicable force that one can also find in the dark majesty of Mother North [that] transmit[s] the whispers of spirits dwelling in the night skies.”  And they do this by taking inspiration from apocalyptic and mystical Polish poet, Tadeusz Micinski.  I'm not sure I understand half of what I just wrote, but rest assured the outcome is powerful stuff.

Speaking of power, I think the first element that really struck me were the drums.  The tone of that bass kick gets you right between the legs.  Speed is a factor, but not at the expense of variety and panache.  And this rhythm section is well met by some reliably swift axe work.  It's a blizzard of distortion flinging hailstones of violent tremolo and neoclassical-tinged hooks in all directions.  Things get intense enough that you'll welcome the soothing ambient reprieve of "Spirits Of The Winter Moon"... while realizing it's only been 4 songs.

Did I leave something out?  Oh yes, the vocals.  They are less singing or screaming than ultimately just another tool to further the sheer velocity and force behind this album.  The physics nuts out there will recognize that force equals velocity times mass.  These distorted howls have a lot of the latter.  Completely indecipherable, the only comparison that comes to mind is Ulver's Nattens Madrigal recorded underwater on a radiofrequency that is slightly out of range.

Just realize that despite all I've said about how hard this album hits, it's an incredibly melodic beast as well.  The guitar lines on "Night I - Algid Gales" absolutely soar in similar ways to the work of Panopticon or Au-Dessus.  And at only roughly 25 minutes, I guarantee you'll be wanting more by the time Toska is through.  This was another one that took me straight into playthrough #2.  You might as well click that repeat button right now.  Save you some time.  Check it out below.