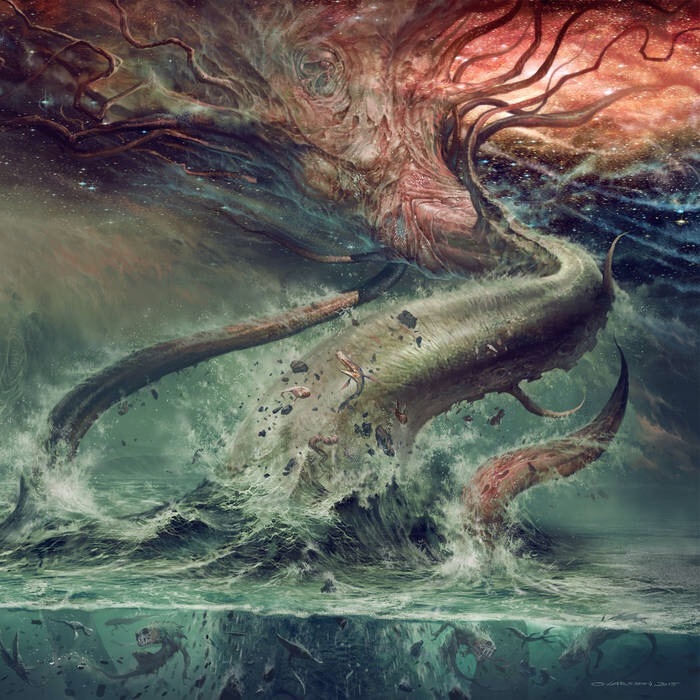 Gateway to the Antisphere
by Sulphur Aeon

Sulphur Aeon are a blackened death metal band from Germany. Finding some success with the debut LP, Swallowed By The Ocean's Tide, they have returned two years later to share some new Cthulu-inspired tunes and breath-taking album art in Gateway To The Antisphere. After hearing the first single, "Diluvial Ascension - Gateway To The Antisphere," I was eager to hear what this new album had to offer.

Fans of Behemoth will be familiar with the riffing style. The spoken word intro just cries Nergal, as do the Babylon-worthy guitar leads. Don't take this to mean these two bands sound the same, because they don't. Rather, Sulphur Aeon submerges similar techniques into enough underwater-sounding effects to create a much more Lovecraftian aesthetic. The end result is more in line with Drautran's Throne Of The Depths.

Certain songs immediately grabbed my attention. "Calls From Below" and "Diluvial Ascension..." open with sinister hooks and a groove that commands the listener to nod with the rhythm. There is a sense of progression within their runtimes that is thoroughly attractive. Slow, foreboding drum beats will give way to blasts of double bass and menacing death growls. Gateway To The Antisphere takes the trademark tremolos of black metal and fuses them fantastically with the technical showmanship of death metal. The flashy drum work near the end of "Abysshex" may not be kvlt, but it is a wonder to behold. Each listen led me to find new elements to enjoy.

Unfortunately, for all of its individual successes, Gateway suffers somewhat as an album. There is an apparent sameness in the tracks that leads me to feel berated and bored at times. Between the dense production and relatively steady pacing, very little was able to grip me on a personal level. I am no elite audiophile by any means, but I think this album may be another victim of the "loudness wars." Or at lease a lousy mixing job. Straining my ears during repeat listens revealed some neat little additions that are unfairly drowned in the muddle.

The result is an album that has been at least partially drained of its rightful personality. The only time I felt emotionally involved was on the distinctly more melodious "Conclusion." Sulphur Aeon teases occasionally with similar stripped down, ear-catching moments like the intro to "He Is The Gate," and a segment in the last third of "Onwards...Towards Kadhath!" With mainly slow, melodeath inspired riffs and sparing drums, there is less going on in these times to brickwall the listening experience. However, such opportunities for expansion are abandoned quickly in favor of more impenetrable blasts of tiresome pummeling.

What drew me to the "Diluvial Ascension..." single to begin with is that the track plays with dynamics and range in a way that makes it constantly engaging. There are ups and downs, highs and lows. The listener is provided enough variety of pace, volume, and melody to truly absorb and appreciate the individual pieces of the puzzle. This is something that Gateway To The Antisphere lacks as a whole, and is a problem that similarly plagued the band's debut. That being said, this sophomore effort shows enough growth in both musicianship and songwriting to keep this group on your radar - or more appropriately, sonar - in the future. I think that Sulphur Aeon has what it takes to be a top-tier band; they just need to be a bit more adventurous in their music and advantageous in their production.