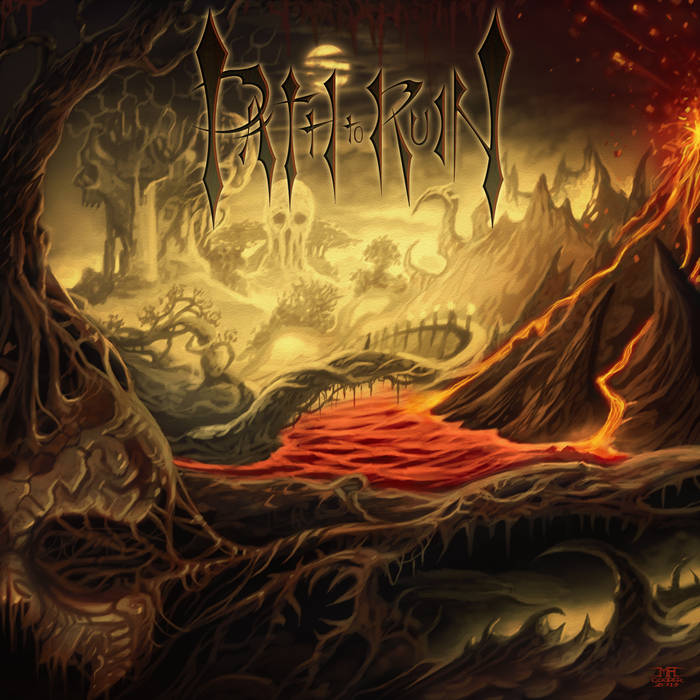 It was around “Stitched Shut” that I realized something: these guys can really play their instruments. This ain't some watered-down Cannibal Corpse with a few kids playing power chords to 4:4 time. Path to Ruin seem particularly fond of 3:4, actually, but the technical f#$kery happening on most of these songs really took me by surprise. My other favorite, “Punishment (Whispers of Woe)” seems like it can't decide whether it wants to pummel or just rock out. Riffs shift drastically in style from moment to moment. And those drums. Between the ferocious blastbeats and varied patterns and fills during the slower parts, this guy is going places.

The vocals on this album are equally noteworthy. At base, this is death metal, what with all of the the crunchy palm muting and pinch harmonics. But between some of the tremolos and the default screech/croak of the frontman; there is also a pretty hefty dose of black metal going on. Whatever you choose to call it, this guy has a grim, menacing presence that is far more Gorgoroth than Dying Fetus. The combination of death grunts and high shrieks also brought to mind Burn the Priest. There is room for growth in the delivery, but I see a lot of potential.

Now I will say that for all of its strengths, Path to Ruin still has the marks of a debut. In particular, the overall compositions can get a bit clunky. I would call it pretty standard as far as first-outings go. We can't all hit it out of the park like Emperor, after all. Each instrument proves its technical chops, but they don't always come together to truly hit the sweet spot as a team. Transitions could also be cleaner with an increased focus on flow. None of this is to say that I did not enjoy the album.

This may seem like a stretch, but bare with me. Look how far Enslaved have come since Vikingligr Veldi. Not unlike Path to Ruin, their sound was a bit rough around the edges, but they already had the makings of a strong group. The musicianship in both cases is sound, and I am really pleased with the vocals on this debut as well. The point is, you never know who the next big thing is going to be, so it's worth taking the whole picture into account. Path to Ruin know how to play better than your average band, and they are capable of creating some devastation in the process. With a little maturation in the songwriting department, this is a group I am interested in following. For now, you can stream the album on bandcamp and purchase it for just $3.