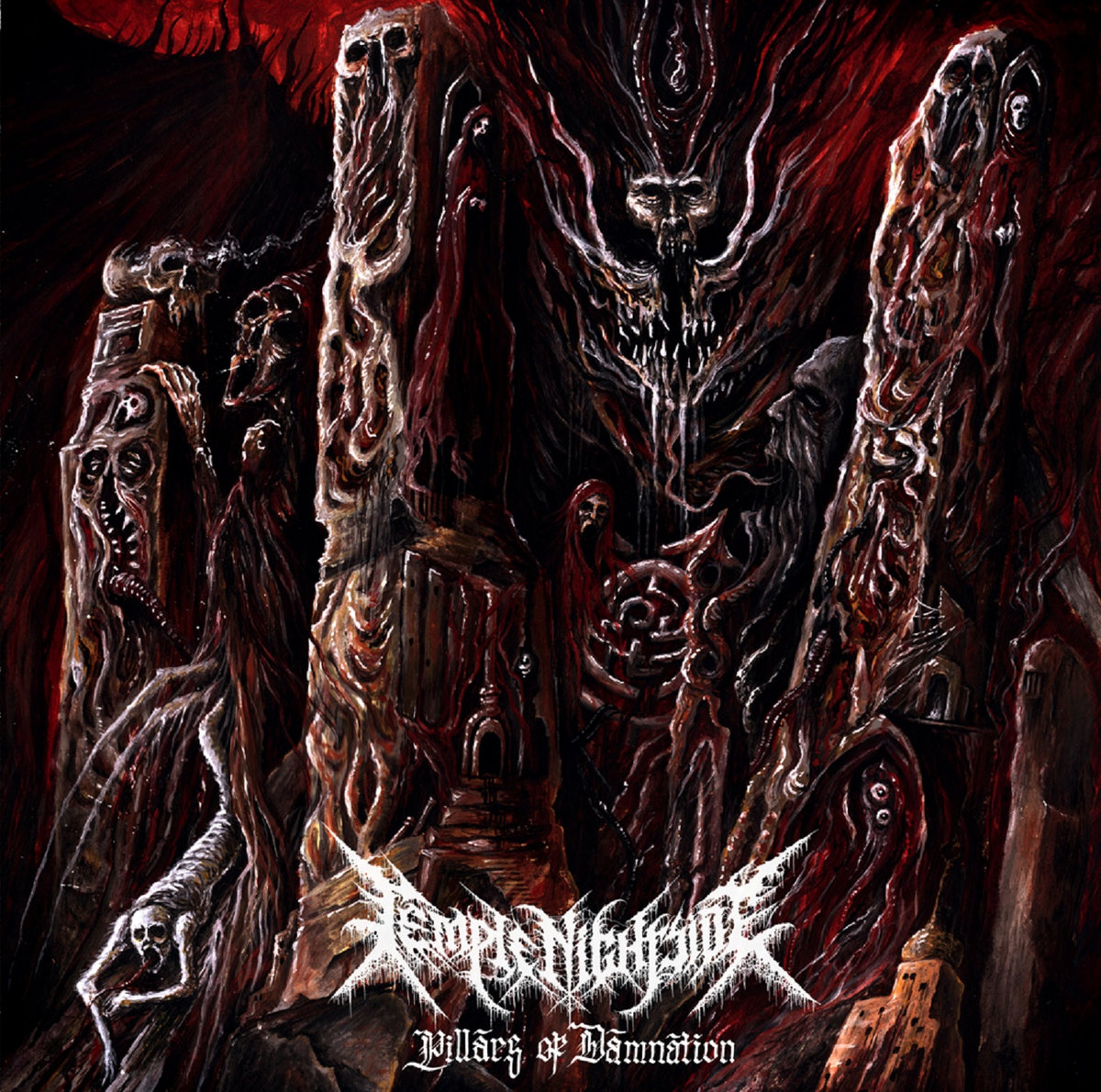 Pillars of Damnation
by Temple Nightside

Australia’s Temple Nightside have spent the last decade making some of the most powerful and murky death metal around, incorporating slower funeral doom leaning moments and hints of black metal tonality to create material that often sounded like it could bore through the center of the Earth.  Two years after reimagining their debut full length with Recondemnation, the group has returned with Pillars of Damnation which offers one monstrous riff after another and spends more time on faster tempos compared to their previous material.  Though there are some similarities between some of the songs, the quality of the riffs stands above other death metal of this type which tends to lack substance underneath of the murky atmosphere.

While you’ll likely see them categorized as black/death metal, there’s always been more death metal to Temple Nightside’s approach, and the darker and muscular sound of the guitar work is reminiscent of several classic American acts.  Each song is immense and there’s so much power behind the recording that it feels like a tidal wave of lava ready to burn everything in its path to ashes as it flows forth with scorching leads and blasting drums.  Compared to The Hecatomb and even Recondemnation, one of the biggest differences between Pillars of Damnation and these albums is the constant barrage of faster tempos and more straightforward death metal riffs.  There aren’t quite as many slower interludes here, with the band reserving them for the slow burn of “The Carrion Veil” and the nine-minute closer “Damnation”.  It’s a slightly more direct and violent sound than I remember, but this actually works to Temple Nightside’s advantage as they cram in riff after riff of crushing death metal that manages to hold your attention throughout, with the slower sections giving just the right amount of reprieve from the attack.  This is a refreshing change from some of the other groups out there that channel this same type of cavernous and dense sound on their albums, as too many of them have a tendency to let the atmosphere drive the writing and become repetitive fairly quickly.  It’s an appropriately dense listen that seems like it could cave your skull in if listened to at max volume, but underneath the immense power and weight there’s a lot of substance to keep you coming back for more.

Founding member IV has spent time in a slew of other Australian bands, so whether you’re familiar with Temple Nightside or not you may have also heard his vocals with groups like Ill Omen and Pestilential Shadows.  IV’s low-pitched growls echo over the recording with an ominous presence, often sounding like they’re reverberating off the walls of a deep cave or tomb.  Like with Ill Omen, the performance here reaches some truly inhuman sounding pitches that span both high and low, keeping the listener on edge almost the entire time.  It helps that Pillars of Damnation has been mixed in a way that keeps the vocals towards the front rather than burying them in them in the background, and this approach only adds to the immensity of the material.  While plenty of death metal strives to achieve this level of darkness and dread in their vocals, few achieve it in the way that Temple Nightside consistently has.

The tempos skew towards the faster side this time around, allowing Temple Nightside to bludgeon and overwhelm in an even greater capacity than before.  There’s still a murkiness to the recording that gives it a denser feel than some death metal, but the emphasis on blasting and mid-tempo passages combined with the sheer weight of each instrument leaves a lasting impression.  Although they haven’t radically reinvented themselves, a decade in this band has refined their craft to its sharpest level yet and delivered an album that can crush everything in its path.  Pillars of Damnation is available from Iron Bonehead Productions.