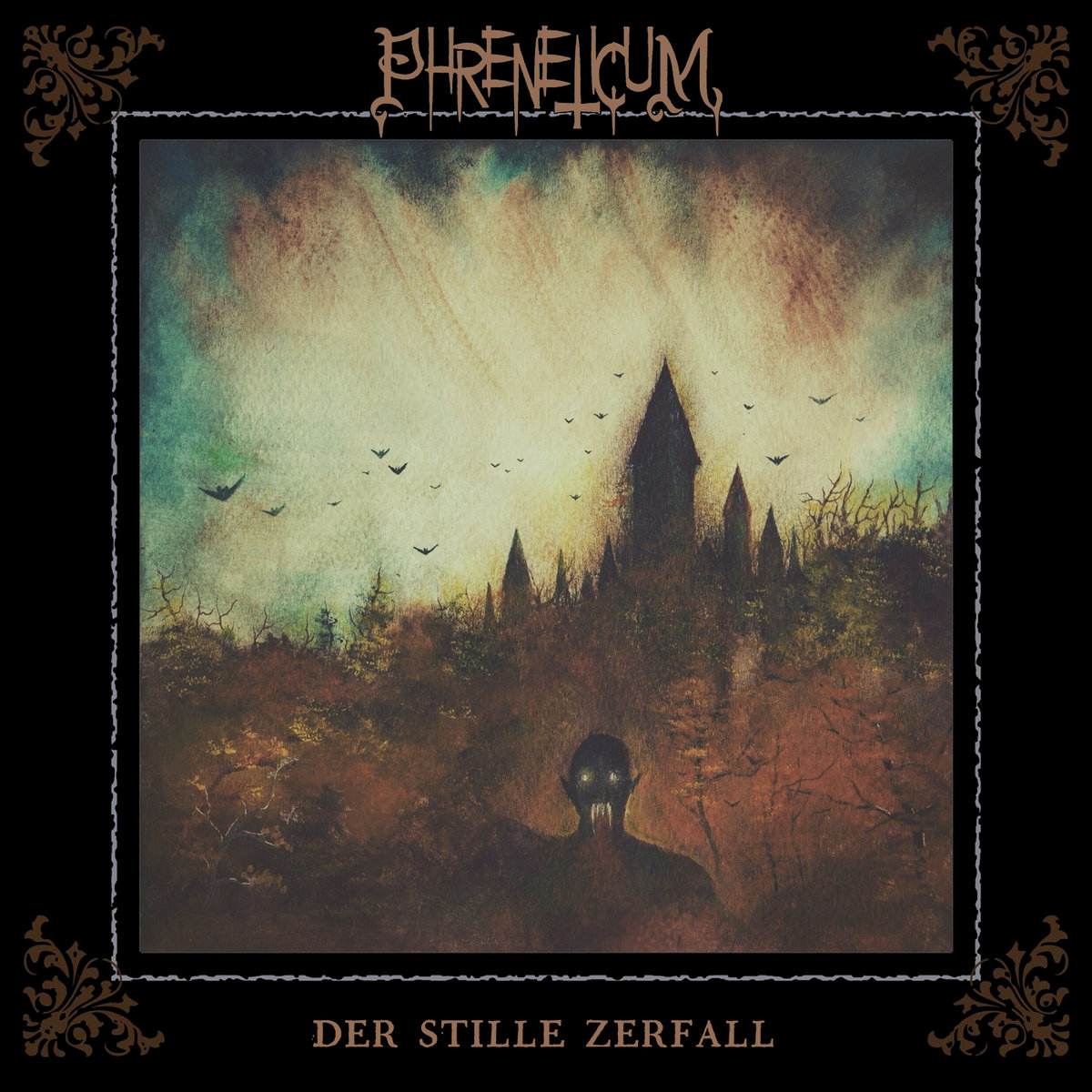 German black metal band Phreneticum has been around since 2015 in various forms, initially having a full lineup before scaling back to the duo that is present on debut album Der Stille Zerfall.  But even with just two people, the amount of noise and jagged edges emanating from this material leaves an impression, as Phreneticum explores both fast paced, unrelenting blasting and more methodical instrumentation where the sound is still drenched in madness and decay.  Although this first outing has a few missteps, the sheer amount of tension and unease the duo is able to create on each song makes it worth checking out.

One of the most impressive aspects of Der Stille Zerfall is the thick atmosphere that is present almost from the beginning, which often feels like its aiming to suffocate the listener.  “Der Turm” starts off with a methodical pace that lets haunting keyboards and twisted guitar melodies swirl together into a nightmarish soundscape, opening into a blitzkrieg of faster drumming around the halfway point.  There’s a noticeably rawer edge to the recording that only adds to how dense the material is, and it keeps Phreneticum often sounding like controlled chaos that is on the verge of collapsing in on itself.  It’s an interesting approach that takes a lot of the core foundations of earlier black metal and presents them in a denser and more unconventional manner, as the programmed elements add an industrial sheen that sometimes recalls Mysticum.  While the slower build-ups and calculated blasting leaves an impression, the ambient breaks that appear on some of the tracks could still use a bit more refinement.  Closing track “Das Grab” works in some fade outs and softer moments, but it comes through feeling too dragged out and disrupts the overall flow a bit too much for my tastes.  Yet even with that being the case, the tense nature of the instrumentation and downright violent outbursts kept me wanting to come back for just one more dive into complete madness.

There’s something about the inflection and tone of German that is well suited to black metal, as it often makes the vocals come through even harsher than some of the other languages.  This holds true throughout Phreneticum’s debut, as Leichenfresse has a high pitched, raspy scream that manages to pierce through the raw layers of noise.  His main pitch reminds me of the earlier Endstille albums where Iblis was the singer, but there are a number of other ones that are layered together to sound like they’re representing multiple personalities.   In the case of albums like this, the sense of anguish and unhinged nature of the performance goes a long way and is likely to draw in many listeners early on.

Some of the transitions over to haunting ambient and creepier instrumentation didn’t fully click with me, particularly on the last song, and I think that Phreneticum does have some room to better implement those ideas into the dense and overwhelming black metal base.  But even with that being the case, the industrial sheen and rawer nature of the material is appealing, and this debut is still likely to find an audience.   Der Stille Zerfall is available from Satanath Recordsand Onism Productions.