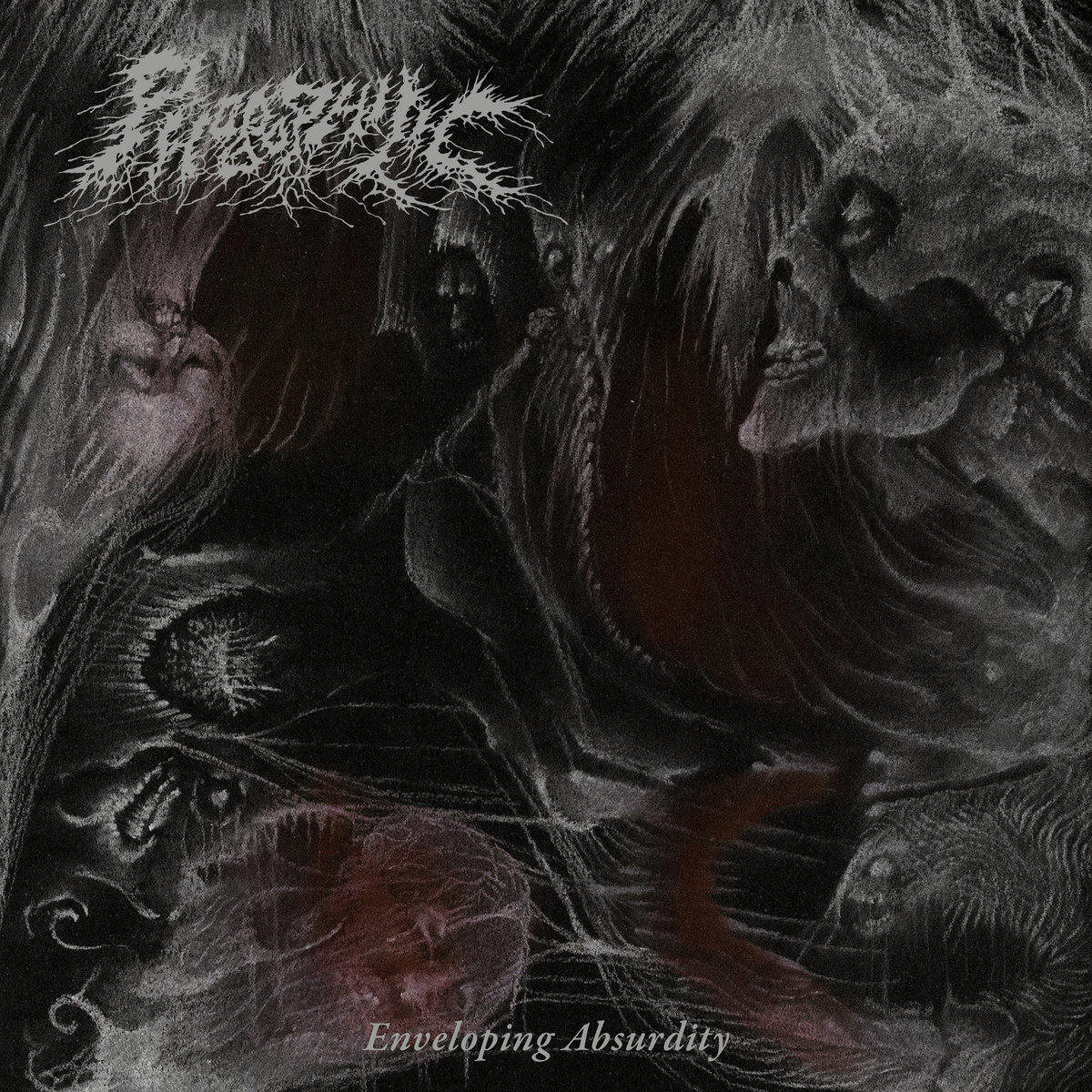 There is so much quality death metal coming out of the US right now that it seems like there’s something for all tastes.  While there are plenty who stick to the templates laid out by other American bands, there are just as many capturing the Scandinavian sounds and injecting their own flavor into it.  Phobophilic has been doing that since 2016, leaning heavily into the murkier and twisted riffing of 90s Finnish death metal alongside some death/doom.  They’ve been steadily gaining an audience over the past six years through shorter releases, and now offer up their first full-length Enveloping Absurdity.  Spread across eight tracks and thirty-eight minutes, it’s clear that the longer wait time for an album worth of material has been well spent as Phobophilic brings strong riffs with them.

The foundation of Phobophilic’s sound is familiar, but they provide enough twists and turns throughout Enveloping Absurdity to keep things feeling fresh.  “Enantiodromia” wastes little time in bringing heavy and murky tonality with a slower, doomier build-up that leads into mid-tempo grooves that seem to lurch forward as though stuck in a thick sludge.  There’s a nice balance of these slower grooves that pummel you with methodical drumming, slower doom passages that let the atmosphere fester, and bursts of faster blasting that remind you that this group can still unleash an all-out attack alongside the best of them.  The way that the riffs seem to bend and twist over the course of each song while transitioning in ways that don’t always feel predictable pulls a lot from the Demilich approach to death metal, and during some of the mid-tempo sections I also got hints of Abhorrence and earlier Convulse, putting Phobophilic in good company for those that like their death metal a bit chunkier in tone.  For much of Enveloping Absurdity the group is focused on riff after riff, but you do get a haunting interlude courtesy of “Individuation” five tracks in that helps to break things up.  As you might expect from an album of this type, there are a few moments that run together slightly, but the number of passages that stand out for me after repeat listens more than makes up for it.  It also helps that the production values add that sense of weight and power that good death metal needs without obscuring the details, allowing these songs to leave a lasting impression.

Although some of the riffs and song structures remind me of Demilich, the vocals fall more in line with other death metal bands.  Guitarist Aaron Dudgeon delivers a growl that spreads outwards over the recording in a way that sounds downright monstrous when it hits its peaks, and he heads upwards into the occasional snarl or scream at the right time to add some variety to the performance.  As with some of the instrumentation there’s a sense of familiarity to Dudgeon’s tried and true growling, but the intensity of the pitch and way that his vocals seem to dance around the riffs add to Phobophilic’s appeal.  The production values once again work well here, allowing the vocals to tower above the recording without overwhelming the rest of the details.

Phobophilic pulls heavily from earlier Finnish death metal while also injecting some hints of old-school American death metal and death/doom, and while they’ll likely remind you of plenty of established acts the way they tie these churning riffs and lumbering grooves together still has enough flair of its own to stand out.  The production offers enough clarity without taking away from the grime, and if this type of death metal appeals to you expect to get plenty of mileage out of this one.  For my tastes their 2020 split mate Sedimentum has a slight edge, but the fact that both bands have put out top tier material makes this an exciting year.  Enveloping Absurdity is available from Prosthetic Records.