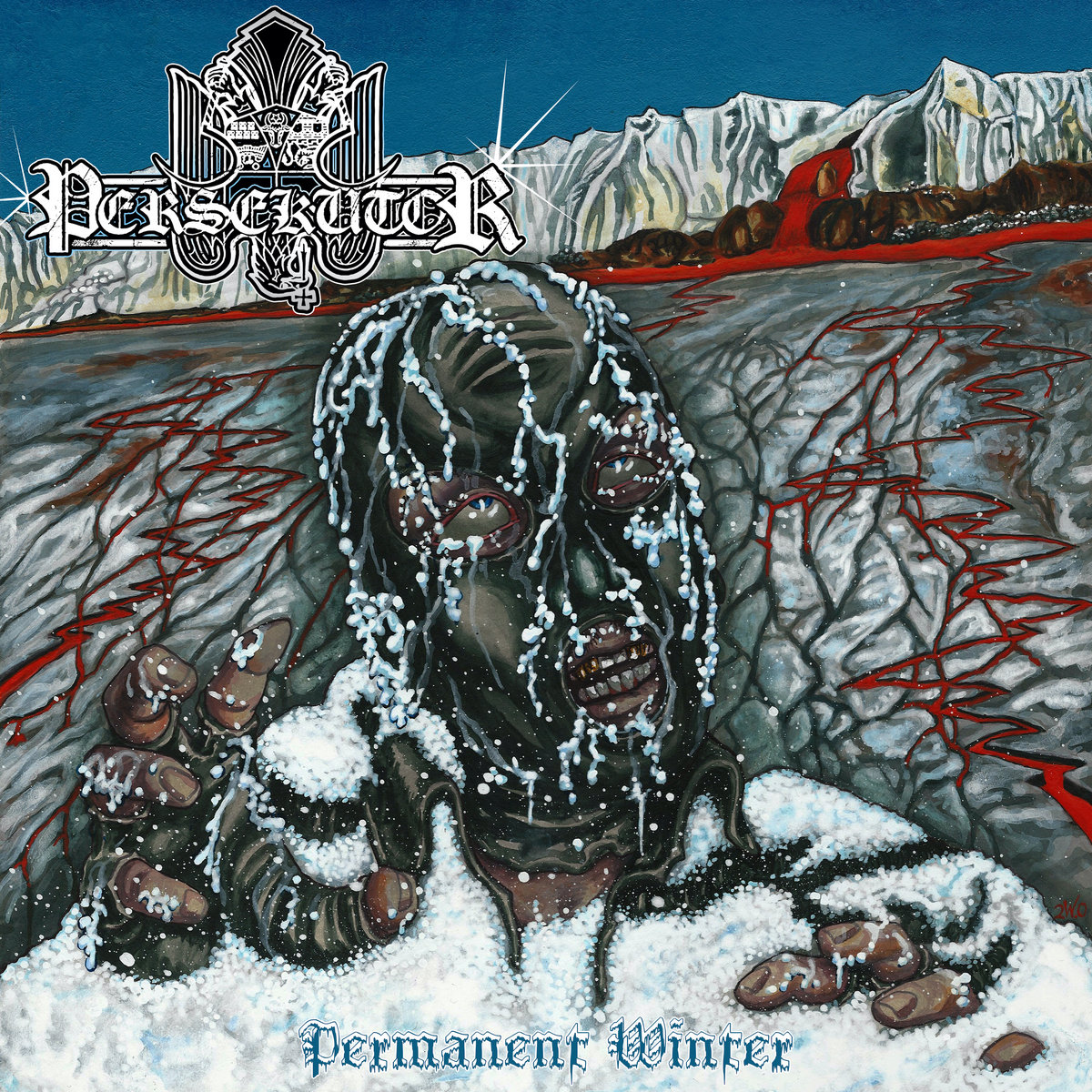 There’s something to be said for bands that try to channel some of metal’s earliest elements, striking a balance between heavy metal, rock ‘n roll, and early black metal.  This is exactly what Persekutor has done on their debut full length Permanent Winter, which follows several EP’s put out over the last seven years.  Originally based in Romania, leader Vlad the Inhaler relocated to Los Angeles and recruited members of Ides of Gemini and Lightning Swords of Death.  The resulting album falls somewhere between primitive black metal and sleazy rock ‘n roll/heavy metal, with quick and punchy tracks that are dripping with sleaze and jagged edges.  It may not quite reach the heights of some of Persekutor’s influences, but this is still a damn fun listen that keeps the grave of the 80s nice and warm.

Like some of the classic rock and metal albums from decades ago, Permanent Winter keeps things short and to the point with a run-time that comes in under half an hour.  Persekutor uses this brevity to lurch forward with jagged and distorted guitar work that falls somewhere between first-wave black metal and heavy metal that’s been slowed down to a crawl.  The tempo does pick up on songs like “Black Death Punk Skins” and “Ice Wars” where the riffs have some punk and rock ‘n roll influence, giving some higher energy and catchy moments that make you want to move around and are downright fun to listen to.  It’s an appropriate that an album named Permanent Winter would primarily revolve around slower tempos though, where the guitar and bass sound like they’re encased in ice and are going at half the speed they normally would.  This gives off a suitably raw and primitive sound, stripping down these metal genres to their basics and focusing on a particular groove or abrasive riff per song.  Everything’s dripping in filth and sleaze, giving off an appropriately 80s vibe throughout, but sometimes it does come through as a bit of style over substance as the songs do blur together at times and not every single one hits the mark.  The strength of “Black Death Punk Skins”, “Chained to the Tundra”, and “Arctic Cross” do make Permanent Winter definitely make this one worth a listen, but it does feel like this lineup is just scratching the surface of what they’re capable of.

One of the most appealing elements of Persekutor’s music has to be Vlad the Inhaler’s vocal work.  He’s got one of those extremely raspy and distorted pitches that’s screamed/sung in a way that makes it easy to make out the lyrical content.  While it doesn’t quite hover over the recording in the same way as on the band’s Power Frost EP, the intensity and eeriness of the performance still leaves a lasting impression.  It’s comparable at times to Athenar from Midnight, as there’s a grittiness that makes you feel like you should be listening to this album while brown bagging cheap liquor in some alley.  You should already know if that’s an appealing quality or not, and if it is Permanent Winter should hit the spot.

Some of the songs on Permanent Winter date back to Persekutor’s earlier EP’s, though they’ve been re-recorded and take on a different light in the context of the album.  While the writing sometimes feels a bit hit or miss with some songs coming and going without truly standing out, when this band nails it and gives you that icy black metal feel with the sleaze of punk and rock ‘n roll they are incredibly fun to listen to.  There can never be enough of this type of first wave black metal and heavy metal worship, and with it seeming like these guys are just scratching the surface of their take on the style it seems like they’ll be one to watch in the coming years.  Permanent Winter is available from Svart Records.