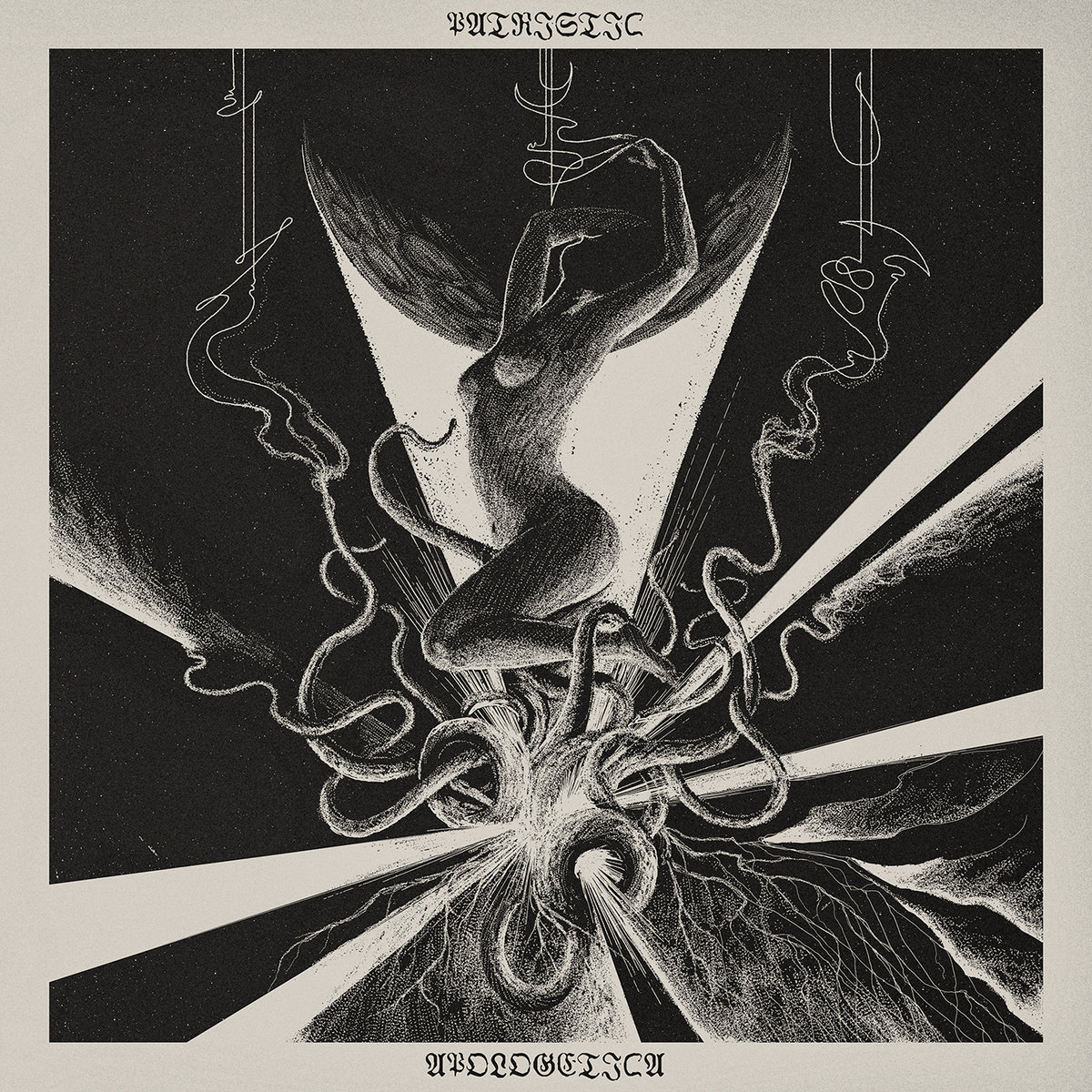 In this digital age more and more bands seem to appear out of thin air, exploding into existence with fairly mature sounding EP’s or full lengths.  This is the case with Italian black/death metal band Patristic, as their debut EP Apologetica appeared with a minimal amount of advance notice and even less information about the group itself.  What is known is that its members also play in bands like Bedsore and Hideous Divinity, but otherwise Patristic has chosen to let its twisted and dissonant take on black and death metal speak for itself.  Apologetica does just that, providing swirling dissonance and technical riffing in a short period of time that are likely to leave your head spinning.

It’s unclear how long this project has been incubating for, but there’s a level of polish to its construction and production values that make this feel a bit further along than a debut.  Apologetica is quite dense throughout each of its three tracks, emphasizing twisting and turning dissonance and technical drumming that rarely lets off the gas, yet there are layers of haunting melodies and other atmospheric elements lurking underneath the surface.  Stylistically Patristic pulls in a lot of the dissonance and tempo changes of black metal like Deathspell Omega or Aosoth, but there’s just as much death metal present in its foundation and the technical nature of the drumming reminds me a lot more of the type of esoteric and cavernous variations of that genre.  It’s a mixture that works well and suits the destructive, bleak, and somewhat mysterious sounds the band generates.  The precision can sometimes leave your head spinning, and that’s why it may take a few times through to catch some of the subtle details that have been layered over top of the harsh foundation.  While there’s plenty to keep listeners coming back, it’s the final track “Praescriptio II” where Patristic fully hits their stride.  On this piece the group pauses and refocuses multiple times over its eight-minute run, going for full-on black metal dissonance at times while letting a more triumphant and destructive death metal feel take over later.  This is the most versatile of the three songs and does leave me feeling like there’s room for the band to expand upon this formula even further to truly push outside of the genre boxes.  Yet the sheer wall of sound and twisted melodies got under my skin and beckoned me back again and again, showing that even this early on Patristic is starting to capture what has made this type of black/death metal so enticing.

Another element that stands out on Apologetica is the vocal performance, as the raspier screams/growls tower slightly above the walls of instrumentation and feel like they’re going to grab you by the throat.  It’s not uncommon for overly dissonant black or death metal to overwhelm its vocals, leaving them sounding like they’re getting drowned out by everything else that is happening on the recording.  That’s not the case here, and when subtle details like chanting are added in on the title track everything is crystal clear.  The chanting has this eerie, almost ghostlike quality with how it weaves in and out of the recording, and when you combine this with the subtle shifts in pitch that the vocals have to offer the performance has an almost nightmarish quality to it.  It’s clear that Patristic is working to have just as many subtle nuances to their vocals as the instrumentals, and I’m interested to see how this side develops on future material.

Patristic has come roaring out of the gate with a wild and dense piece of black and death metal, offering up technical precision and dissonance that comes through more fully formed than one might expect of a debut.  The blistering intensity mixed with moments of haunting atmosphere is appealing, and that has kept me coming back to get smacked in the face by this 20-minute EP quite frequently.  Admittedly it sounds like the band is just starting to break out of some of the familiar trappings of the dissonant approach towards the end, and there is room for them to further experiment and put their own stamp on it.  But this remains an immense starting point, and it’s a thrill ride many of you will be more than happy to take.  Apologetica is available from Pulverised Records.