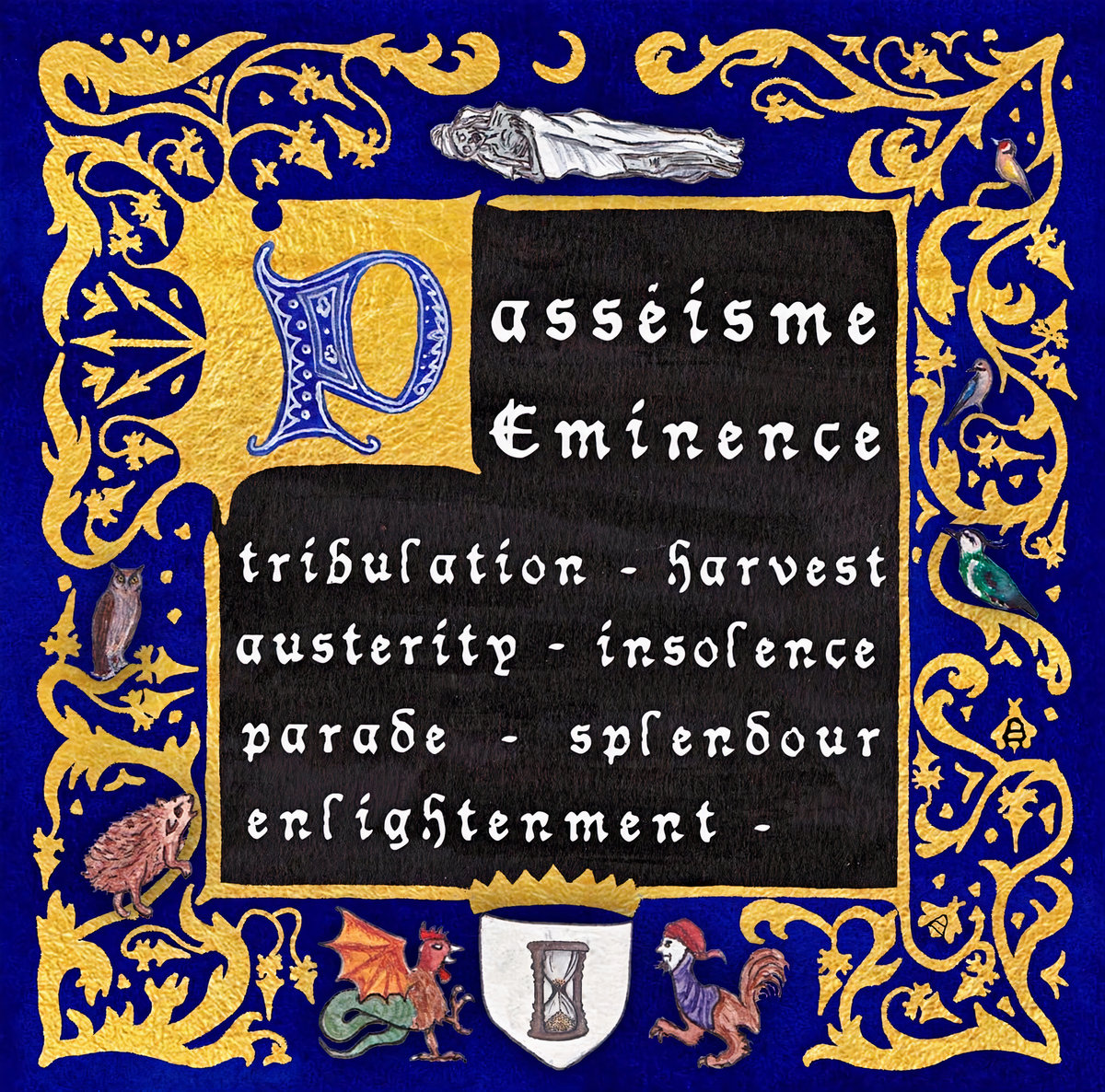 Though Passéisme’s may take a considerable amount of influence from the more medieval sounding black metal from France as well as poetry and literary works from the end of the 19th century, the band hails from Nizhny Novgorod, Russia.  They first came to my attention with the 2019 demo Austerity Parade, which featured two tracks of raging black metal with a whirlwind of riffs and abrasive vocals.  Two years later the band has returned with Eminence, which incorporates the songs from Austerity Parade into a full-length filled with aggressive instrumentation that recall the turbulence of the transition between the centuries.

Unlike some of the other black metal bands out there who have a medieval flair to their material through the use of traditional instruments, Passéisme achieves this tone through the standard guitar, bass, and drums, with flute appearing briefly on the interlude “Chant for Splendour” towards the end of the album.  Instead, the swirling and grandiose nature of the melodic leads is what creates this feeling, with the songs often taking elements of music from these time periods and adding a much harsher and violent exterior to them.  Eminence consistently delivers a flurry of riffs, only giving a few brief moments for listeners to catch their breath with some mid-tempo sections that still have plenty of twists and turns.  The production retains some rougher edges, with the bass breaking through the wall of guitar and drums at just the right moments to add a low-end rumble that feels like an army marching into battle.  Despite the sheer amount of power coming through in the recording and the number of riffs the band throws at you, the emphasis on speed does result in the first half blurring together a bit over repeat listens.  The ambitious ten-minute closer “Chant for Enlightenment” does find Passéisme shaking their formula up a bit, letting the abrasive and dense riffing give way to some acoustic interludes that bring a brief period of reflection before heading back into the attack.  A little more variation and periods of calm like this would help to break up some of the material into more distinguishable songs, though I can’t deny the power and onslaught of riffs has continued to bring me back for more.

The vocals might prove to be a point of contention for some people, as bassist KK has a yell that echoes over top of the recording, sometimes sounding like a feral howl.  It can best be described as the anguished yell of someone in a damp, dark prison destined for the gallows in a moment of rage, and while some may find that the somewhat one-dimensional nature of the performance becomes grating I felt it suited what Passéisme was trying to achieve.  Given the lyrical focus on Fin de siècle and decadence, where there was a considerable amount of pessimism and the thought of society degenerating and going backwards (which the band’s name alludes to), there’s a lot more to dive into than fits the scope of this review and it’s an element that sets them apart from some of the others out there.

While the constant speed and swirling melodies results in some songs that blend together, Passéisme’s debut has still drawn me back thanks to its more aggressive and triumphant take on medieval influenced black metal.  A few tweaks in terms of variation in tempos and maybe some additional interludes could go a long way, but there’s no denying that only two years after their formation this band is already showcasing some strong material.  Eminence is available from Antiq Records.