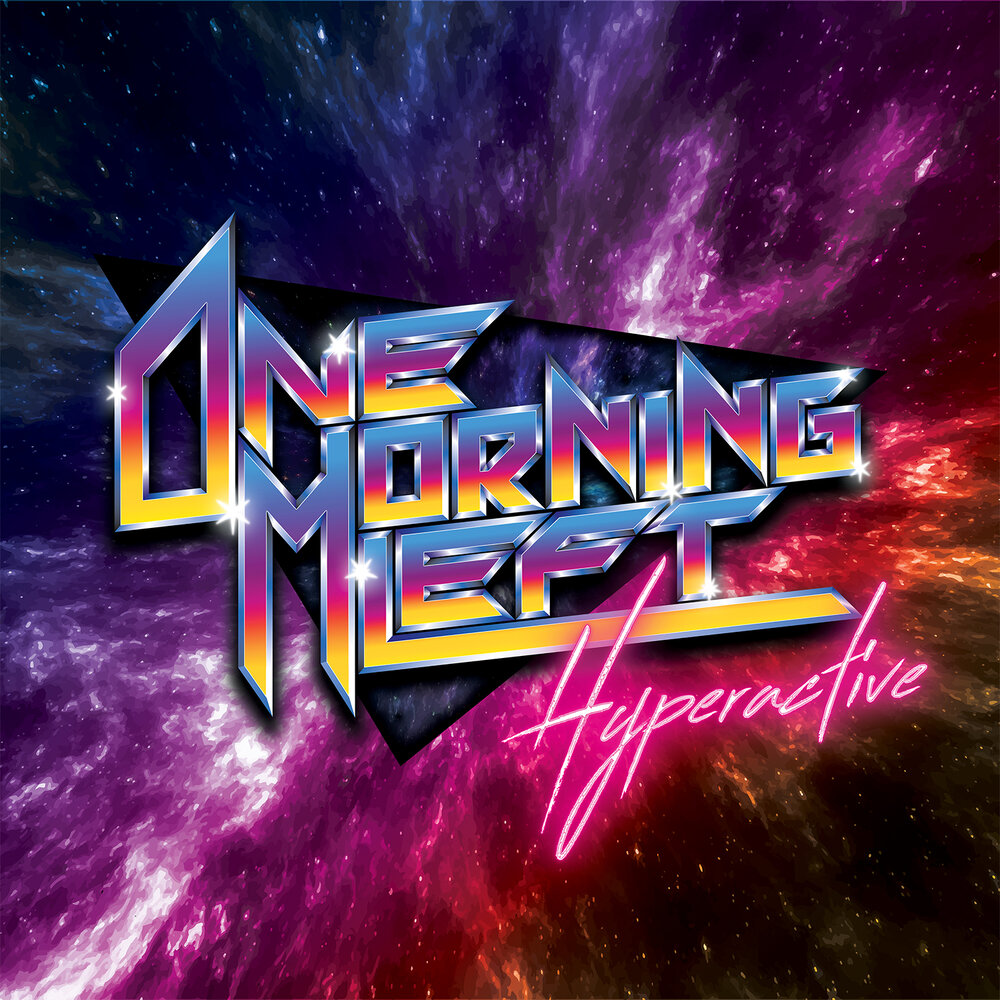 Hyperactive
by One Morning Left

I’ve spent a good portion of 2021 immersing myself in rock and metal styles that I hadn’t focused on as much in the past decade, with 80s leaning hard rock and metalcore getting much more traction.  So Finland’s One Morning Left’s new album Hyperactive caught my attention early on, as it seeks to merge metalcore and heavy metal with a healthy dose of cheesy keyboards and high flying guitar solos that wouldn’t sound out of place on a hair metal or 80s movie soundtrack.  With a perfect balance of heaviness and pure cheese, this is a consistently fun listen that may not drastically reinvent any of its individual styles but still does everything well.

One Morning Left has been around for the better part of thirteen years now, having started off closer to the keyboard and trance leaning metalcore that was popular around the late 2000s, but they’ve changed over time as their lineup has shifted.  Compared to their previous three albums and EP’s it seems like the band has attempted to get both heavier and faster, upping the keyboard and 80s influences while coming through with even more metal than before.  It’s the type of combination that could fail spectacularly in the wrong hands, but One Morning Left pulls it off with ease.  “Ruby Dragon” and “Neon Highway” serve as great openers that showcase listeners exactly what they’re in for, as chugging and high flying guitars reminiscent of classic Killswitch Engage lead into arena filling choruses where the keyboards channel Journey, synthwave, and 16 bit video game soundtracks in equal capacity.  The move from pure cheesiness into much heavier passages consistently put a smile on my face, and One Morning Left shakes up the formula enough from one song to the next to keep things from quickly becoming repetitive.  One minute you’ve got pure metalcore with almost power metal choruses, and the next you’ve got some nu-metal exploration alongside pop rock sensibilities.  Admittedly a few of the songs in the middle of Hyperactive seemed to skew a little bit too close to standard metalcore and post hardcore, which caused them to not stand out as much, but the strength of the other tracks has kept me coming back again and again.

Both Mika Lahti and Leevi Luoto contribute lead vocals throughout the album, with almost every other member contributing back-ups at certain points.  This gives the material quite a bit of variety which is evident right from the first few minutes of “Ruby Dragon”, as you’ve got very aggressive and low pitched growls with much softer singing that has a post hardcore meets 80s rock tone.  From there the performance continues to shift, as you have passages that go full metal with consistently harsh screams and growls alongside ones where the singing hits higher pitches similar to Anthony Green.  “Downfall” brings in rapper OG Ulla-Maija and DJ Massimo as guests which brings in more nu-metal and hip-hop and reminds me of the direction that Ghøstkid took on his album last year.  There’s always something different for listeners to take in, and while it might not appeal to all tastes those who like a healthy dose of metalcore and post hardcore are sure to find a lot to like.

Plenty of metalcore and hardcore bands have attempted to integrate significant amounts of electronics and synths, but a lot of them have come off as gimmicky.  One Morning Left manages to have substance behind their extremely over the top sound, resulting in catchy numbers that are fun and aggressive.  It does lose a bit of its hooks around the mid-point, but there’s still plenty here that makes this easily the best release the band has put out to date.  I suspect those that don’t already like hair metal, metalcore, or post hardcore won’t find that this clicks with them, but those who like their cheese and silliness with a dose of scorching riffs will want to check this out.  Hyperactive is available from Arising Empire.