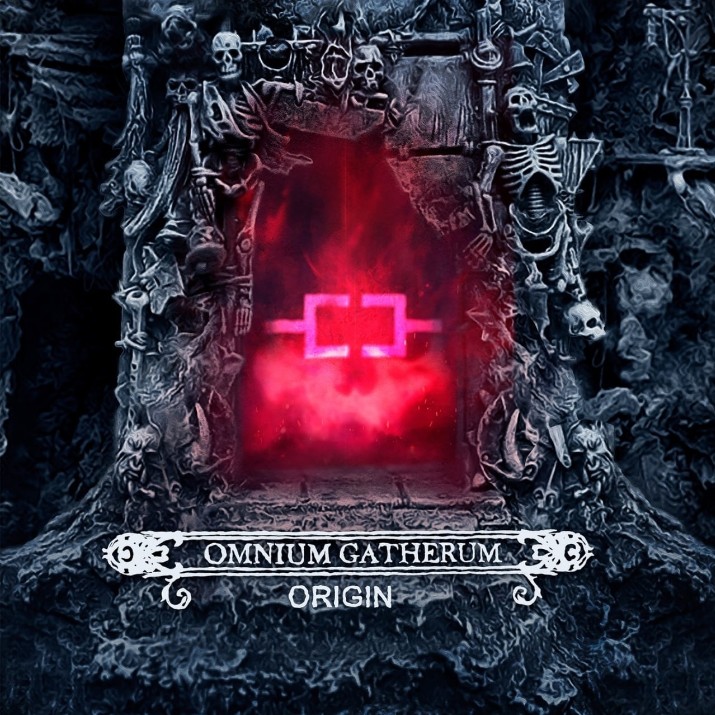 Where some bands find a sound quite early on and then make tweaks to it for years to come, Finland’s Ominium Gatherum had developed slowly and tried quite a few different things before finding the huge, booming choruses and entrancing keyboard melodies fans think of today.  Their earlier efforts are an incredibly different experience from the later ones, some coming through like a product of their time, and it wasn’t until somewhere between 2008’s The Redshift and 2011’s New World Shadows that Omnium Gatherum would settle on a signature sound.  Since then, they’ve tweaked this in different ways, going for lengthier and progressive leaning passages on some releases while others have settled on concise melodic death hooks.  Although album number nine may be titled Origin, don’t expect that the band is suddenly going back to their rougher late 90s demos or early 2000s full-lengths, but they’ve instead re-oriented towards the room-filling choruses and epic feel of some of their best releases.

Omnium Gatherum sounded re-energized on 2018’s The Burning Cold, and that’s only continued on Origin.  Much of the songwriting favors the mid-tempo to faster pace that keeps things feeling high energy, allowing the guitarists to move seamlessly between heavy, distorted leads and soaring melodic choruses where the keyboards also have the opportunity to shine.  But the dips into softer territory comes through with a bit more weight this time as well, as songs like “Fortitude” offer warm yet melancholic acoustic guitar and haunting keyboards that sound a bit more like the melodic death/doom of Swallow the Sun with a few progressive flourishes thrown in.  The band has attempted this before, especially on the slower paced Beyond in 2013, but there’s a better balance between these softer, subdued moments and the speedier, booming choruses of the melodic death metal elements on Origin.  Omnium Gatherum hasn’t drastically reinvented what they’re doing on the songwriting front, but they’ve been smart about the flow to ensure that there are specific melodies from either the guitar or keyboards that stick with you on almost every song.  The peaks approach the epic levels of New World Shadows, while the dips into other metal styles like death/doom and black metal feel a bit better integrated than on some of the group’s past discography.  Admittedly a few of the longer pieces (particularly the almost nine-minute closer “Solemn”) feel like they could’ve been cut down slightly, but still there’s a considerable amount of memorable material to come back to here.  If you’re listening to the physical CD, “Solemn” actually isn’t the closer as Omnium Gatherum has included a cover of Infected Mushroom’s “In Front of Me”, which the band transforms into a melodic death metal variant with ease.

Jukka Pelkonen has been the voice of the band since 2006, which is long enough that some listeners might not even realize they’ll be hearing a completely different singer if they check out Omnium Gatherum’s first two releases.  While his lower growls felt a bit stiff to me on those first few appearances, over the past fifteen years he’s really developed them to be as powerful and commanding as fans of this style could possibly want.  Pelkonen not only enunciates so that the lyrics are quite easy to make out, but his pitch subtly shifts over each song, providing a more nuanced performance.  There is still plenty of singing as well, which brings a surprisingly brighter and warm tone that contrasts nicely with the coldness and aggressive feel of the growls and raspier screams.   Again, none of these elements will be surprising to those who have been following these guys for a while, but they come through with even more polish this time.

Origin contains all the elements you’d expect from a modern Omnium Gatherum record, but the subtle tweaks in their songwriting results in material that’s engaging from beginning to end.  A few moments do feel a bit too long, but so many of these choruses and melodies remain in my head that this is likely to be my favorite of the band’s recent efforts.  New World Shadows is definitely still the peak for me, but for these guys to have come this close a decade later says a lot and showcases Ominium Gatherum has a lot left to give listeners this far into their career.  Origin is available from Century Media Records.