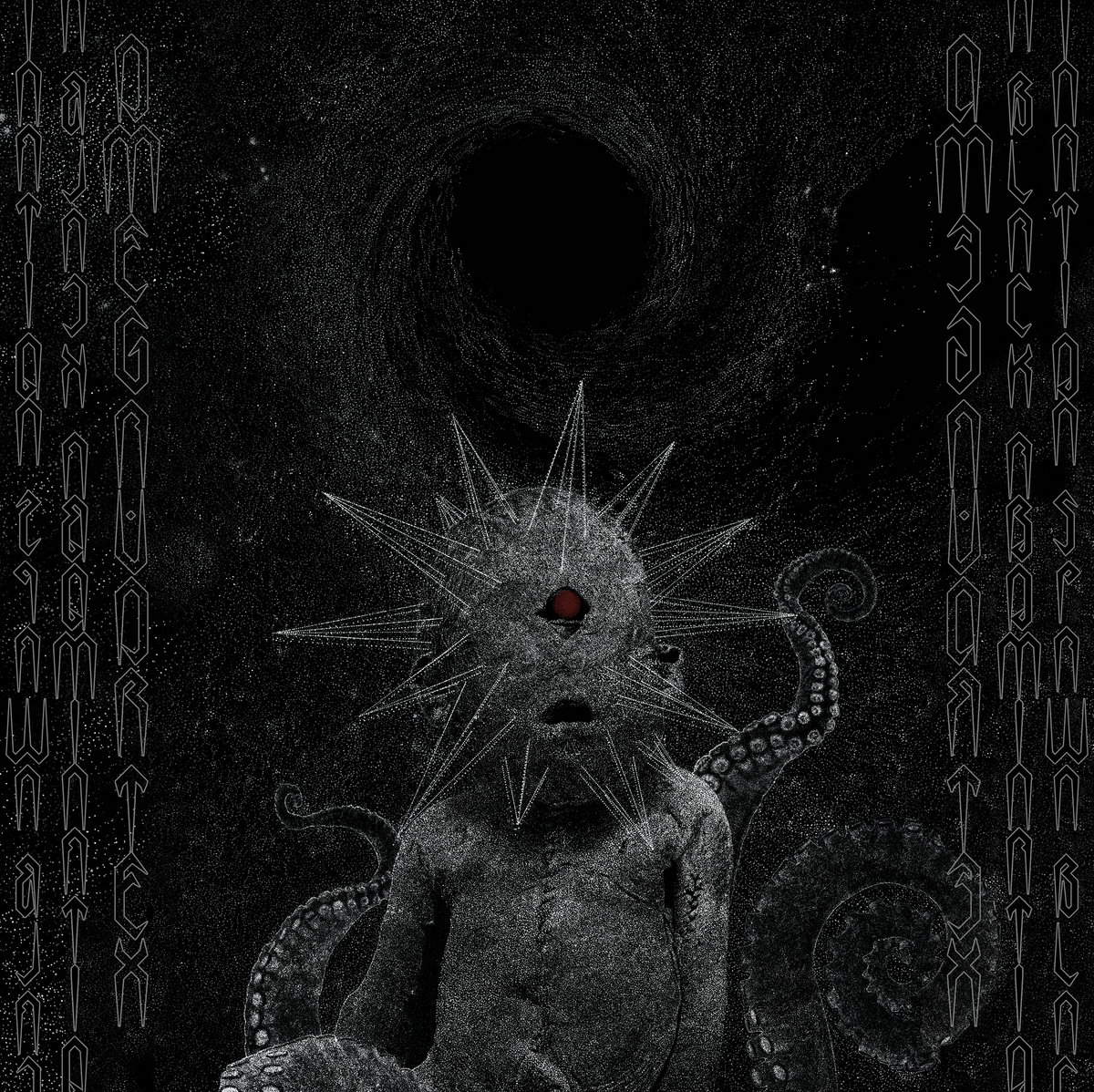 While Omegavortex may be a new name for many listeners they’re not a truly new band, as the mysterious German entity spent ten years as Ambevilence before adopting the Omegavortex name in 2018.  This year marks the first full-length that has been released under either name, as there have only been demos and EP’s in the past, but one listen to the controlled chaos and spiraling riffing on Black Abomination Spawn is all you’ll need to confirm that the lengthy incubation period has paid off.  While their influences date back to some of the most extreme groups during the formative days of black and death metal, the songwriting naturally pushes these ideas forward making Omegavortex’s debut a challenging and engaging listen.

Shortly after you press play, you’re greeted with a whirlwind of riffs and drum beats that blast away with such force and regular shifts in tempo that it can be hard to keep up at first.  Structurally the chaotic onslaught and density of the sound is reminiscent of early innovators like Necrovore, Possessed, and Morbid Angel but the tonality blends both death and black metal together in ways that sometimes bring the nightmarish slant of Teitanblood to mind.  Despite how overwhelming the instrumentation can feel at times, there are also specific riffs that stick out from one song to the next and Omegavortex recognizes just when the right moment is to slow things down and let a tense, cold atmosphere seep in that brings to mind the vastness and destructive nature of the cosmos.  It’s the type of death/black metal that grabs you upon that first listen with the sheer amount of power on display, but there are details under the dense layers that won’t fully reveal themselves until you’ve been able to spend some real time with the album.  While this type of frantic and furious approach isn’t unexpected for these genres, what helps Omegavortex stand out is the precision of their attack as there’s a sense of controlled chaos to their material and despite the fluid nature of the songwriting nothing feels out of place or sloppy.  At their core, this band channels the formative elements of extreme metal when thrash, black, and death metal were all starting to separate from each other and attempting to be as rabid and intense as possible, but the immense sound and sprawling nature pushes Black Abomination Spawn into its own territory and makes it far more than just an old-school imitator.

With just how aggressive and twisted the instrumentals are, you’d expect that the vocals would match this same intensity and Omegavortex is able to deliver just that.  The group’s singer has a raspier scream that is forward in the mix, allowing it to twist and turn alongside the guitar, bass, and drums and have a larger than life presence that suits the group’s cosmic, otherworldly feeling.  I’m always impressed when performances are able to consistently hit this type of unhinged, rabid level of energy, where the vocalist almost transcends their sense of humanity and captures something not of this world, and Black Abomination Spawnhits this level for much of its run-time.

There have been plenty of bands over the years that have tried to channel the non-stop chaos and denseness that some of those demo-era death metal bands had to offer, but many of them have gotten the style right without much substance to back it up.  Omegavortex captures not only the overwhelmingly dense and fluid sound, but they have actual riffs and memorable passages to back it up and with hints of black metal woven in they manage to sound a bit different than the simple Morbid Angel worship that you find so often these days.  It’ll likely take some time to unravel everything happening here, but those with a taste for the most destructive and chaotic variants of these genres will eat this one up.  This is a definite best of the year contender, and hopefully it won’t be another ten years before we get another taste of Omegavortex.  Black Abomination Spawn is available from Invictus Productions.