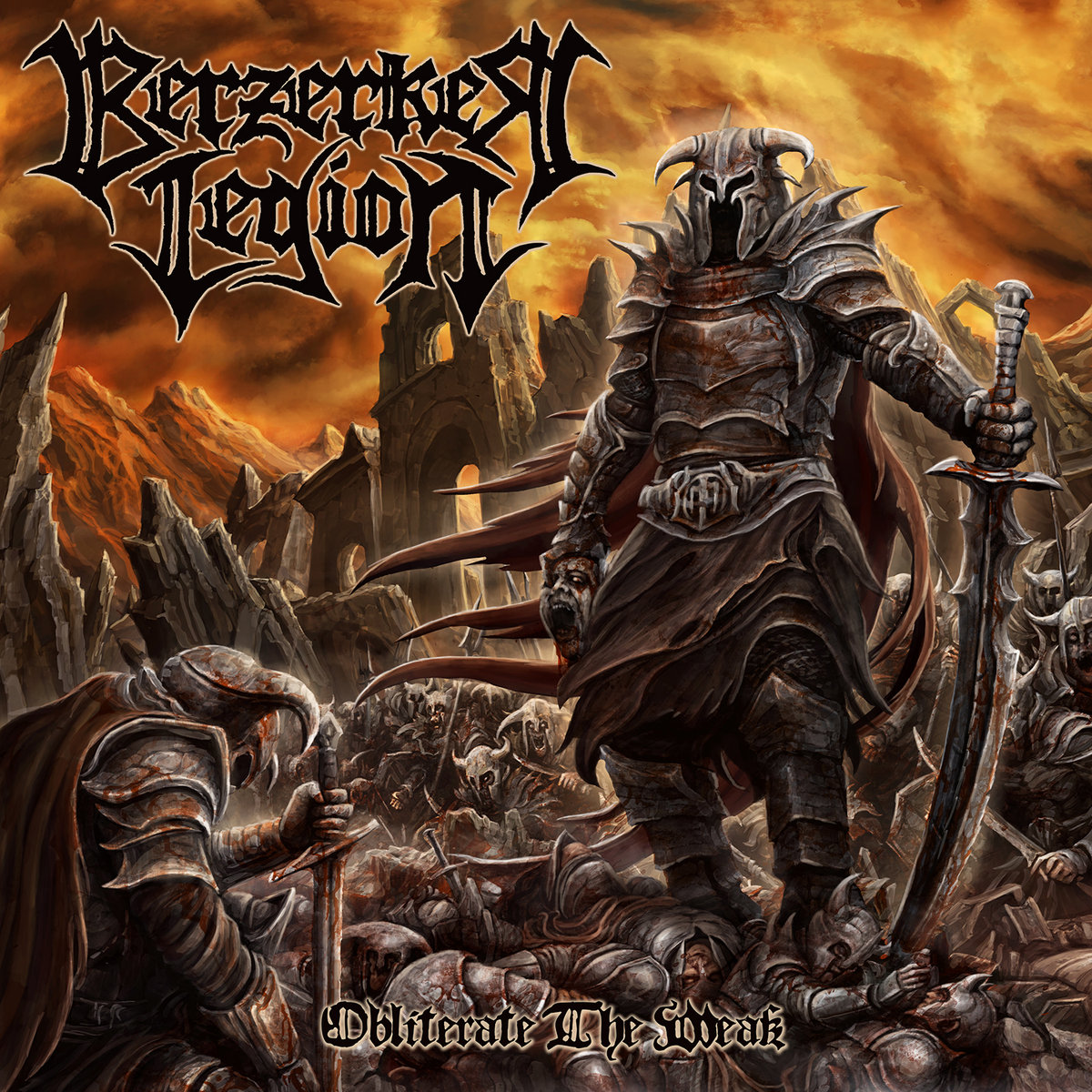 Obliterate the Weak
by Berzerker Legion

Berzerker Legion may be a new name in death metal, but you’re likely to have spent some quality time with the groups their members have played in.  With the press bio mentioning the likes of Hypocrisy, Vader, Asphyx, and Wombbath it’s safe to say that these guys have plenty of experience with the genre.  Their debut full-length Obliterate the Weak pulls from familiar territory, merging crushingly bottom-heavy riffing with soaring and grandiose melodies for songs that have room filling capability.  Although some of the tracks do blur together by the end due to the group’s reliance on slower tempos, this is still a strong first showing and hopefully just the beginning of what Berzerker Legion is capable of.

“Rise of the Berzerkers” feels like an appropriate way to kick things off, as it starts off with an ominous build-up from the guitars and drums that come across as though there’s an army just over the horizon and all hell is about to break loose.  From there the band launches into their brand of death metal that falls somewhere between the crushingly dense traditional variants of the genre and the sweeping, epic nature of the melodic branches.  Even though not all the members hail from Sweden, this is still a very Swedish sounding record and there are hints of earlier Amon Amarth and Hyprocrisy throughout Obliterate the Weak which proves to be quite appealing.  The first half of the album crushes everything in its path and has some standout guitar leads that are sure to keep listeners hitting the repeat button, with songs like “Of Blood and Ash” and “The Falling Dawn” striking that perfect balance between lumbering, bottom heavy grooves and grandiose melodies that wash over your entire body.  What does hold the album back slightly is the reliance on mid-tempo riffs, which does make some of the songs blur together a bit especially once you get to the second half.  There’s still plenty of substance to keep listeners coming back for more, but Berzerker Legion does have room to shake things up even further in the future.

Jonny Pettersson has been a fixture of Swedish death metal for quite some time, and chances are you’ve heard his growls on an album over the past few years.  His style is well suited to Berzerker Legion’s sound, as he has one of those growls that fills out the sound significantly and stands over top of the instrumentation like a general ready to command an army.  There are some subtle variations to the pitch over the course of Obliterate the Weak that prevent the performance from feeling too repetitive, and the intensity of the vocals draws you further into the material.  Despite the sheer number of bands that Pettersson writes and records with, it feels like he’s always giving it all and nothing is ever phoned in which makes a big difference.

There are some moments that blur together a bit by the time the album comes to an end, but the amount of power and the catchiness of the strongest hooks still make this one worth checking out.  Berzerker Legion hasn’t strayed far from what you’d expect given their lineup, but they do it well and have left room to further expand and truly stand out from the pack in the future.  For now it’s still likely to scratch that 90’s and early 2000’s melodic death metal itch, and that’s something I’ll take any day.  Obliterate the Weak is available from Listenable Records.