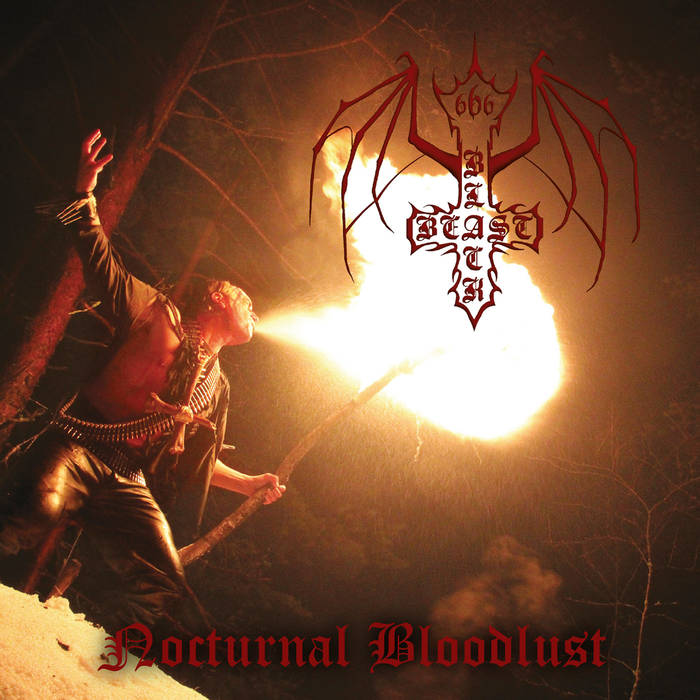 Finnish black metal continues to have some of the best riffs around, and the latest example of this comes courtesy of Black Beast’s debut full length Nocturnal Bloodlust.  Formed back in 2002, the group released an EP and split with Bloodhammer before laying dormant for nearly thirteen years.  But the longer incubation period appears to have worked to their advantage as Nocturnal Bloodlust is an unrelenting, raw slab of black metal that pays worship to the second wave sound while offering one standout riff after the other.  It’s a concise and powerful statement, and hopefully just the beginning for a band that has returned in a big way.

With the first track titled “Prelude” one might expect that Black Beast would kick things off with an ominous, slower intro similar to many of their peers.  But that’s the exact opposite of how the album begins, as it launches into abrasive and cold riffing that opens up into a scorching guitar solo.  This feels appropriate seeing as Nocturnal Bloodlust leaves little breathing room throughout its half-hour run time, with the band continuing full speed ahead with intense riffing and little in the way of interludes.  There’s quite a bit of second-wave influence to be found here and the absolute coldness of the tonality is often reminiscent of some of Satanic Warmaster’s releases, but the writing finds its own rhythm and manages to stand out in a way that feels like much more than an homage to the genre greats.  Black Beast pummels away at your senses with warlike precision, only slowing down the tempo to a mid-pace briefly on some of the tracks, but despite the similar construction of some of the songs the leads and solos are strong enough to make each one distinguishable.  Where a lot of black metal of this type peaks early and blurs together by the halfway point, this album has one high point after the next and quite a few of its riffs will stick with you even after you’ve finished listening.  It’s also bolstered by a production that’s suitably raw but lets the details break through, giving the recording an immense amount of power that feels like it’s capable of leaving behind nothing but scorched earth.

The vocals add a suitably vicious edge to the material, as they come through as abrasive screams and growls that are so jagged they feel like you’re rubbing your skin directly on barbed wire.  Nocturnal Bloodlust has been mixed so that this vocal work is front and center, and each word seems to tower over the already colossal instrumentation with a truly commanding presence.  What stands out about Black Beast in this regard is they vary the pitch quite a bit over the course of the album, as the raspier screaming often gives way to some demonic sounding growls and other ranges that help to break up each verse.  It’s a small detail that makes a big difference and adds to the album’s appeal, convincing you to return for another dose of hellish glory.

Black Beast channels the best of Finnish black metal that 2019 has seen so far, and that’s a big statement considering some of the other albums that have come out over the course of the year.  It’s not reinventing the wheel by any means, but what these guys have done is boil the genre down to its core elements and refined it immensely.  This is a mandatory album for black metal fans and hopefully not the last we hear from Black Beast.  Nocturnal Bloodlust is available from Primitive Reaction.