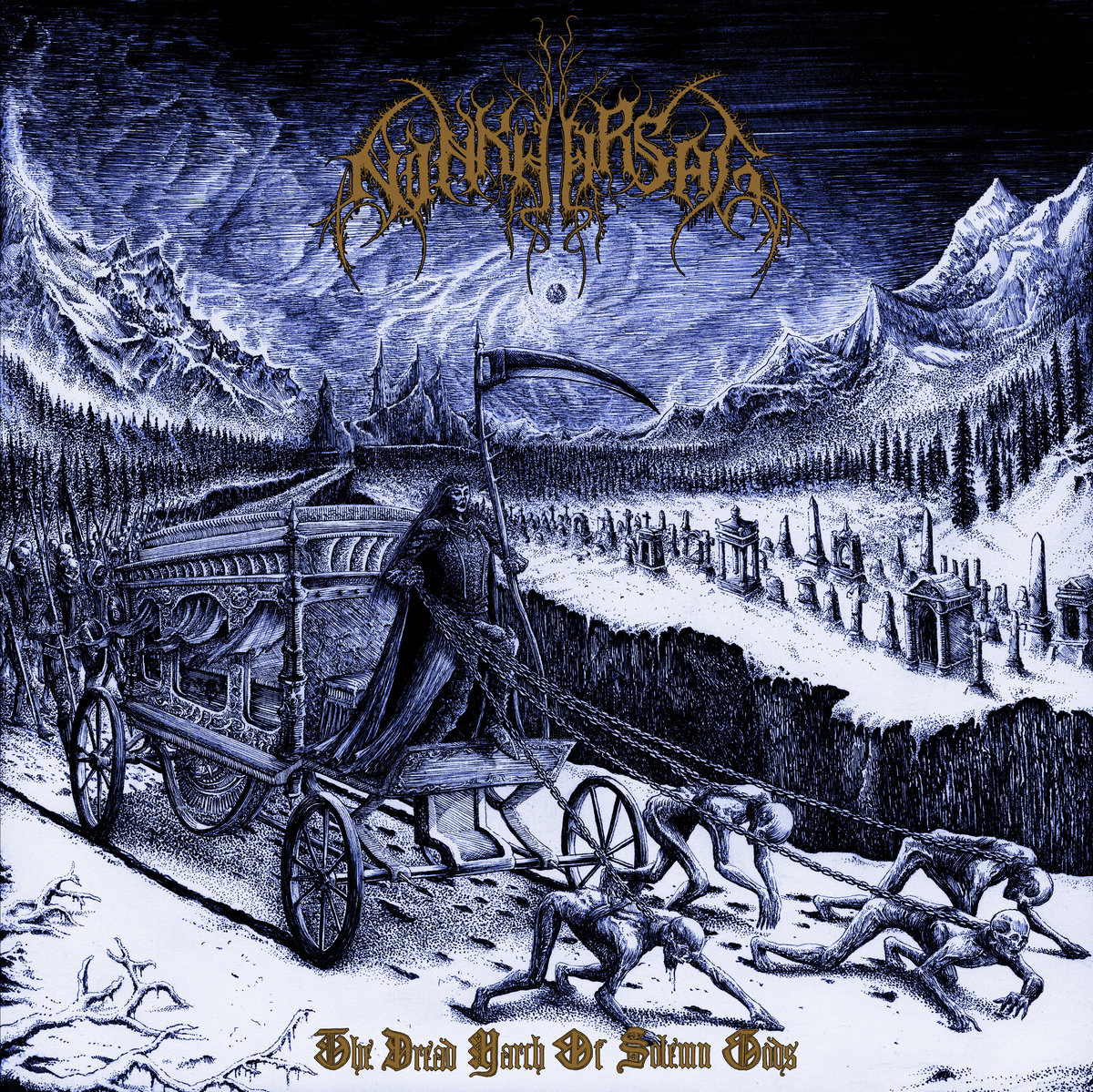 The Dread March of Solemn Gods
by Ninkharsag

England’s Ninkharsag started out as a one-man project back in 2009 before expanding to a full band two years later, but it wasn’t until 2015 with their debut full length The Blood of Celestial Kings that they started to truly make a name for themselves in the world of black metal.  Since then the group has been quiet on the release front, finally returning with The Dread March of Solemn Gods six years after that debut.  Stylistically Ninkharsag has retained that same blend of sweeping, melodic black metal and epic heavy metal influence but has gone for an even more powerful and tight sound than before.  Although they do start to fall into too much of a pattern by the end of the album, this is still a consistent blast to the face that channels just the right amount of high energy riffs and atmosphere to draw listeners in.

Rather than launching immediately into icy blasting Ninkharsag instead eases listener in with the moodier intro “Night Wrath”, letting some acoustic guitar and ominous chanting build a sense of tension before leading into a mid-tempo cadence that feels like its portraying a fantasy army marching forward.  The title track then unleashes a full wall of sound at you, mixing fast and mid-tempo passages that bring the likes of Dissection and Naglfar to mind.  For those of you who have heard The Blood of Celestial Kings, it’s clear that the band wanted a much fuller and powerful sound that feels like it’s portraying something immense and otherworldly, and they’ve succeeded in that regard.  Ninkharsag uses these production values to bludgeon listeners with icy blasts as well as some slower gallops that incorporate a bit more heavy metal a la Bathory, and when some of these tracks reach their peaks they come across as truly epic in scope.  However, while there’s a considerable amount of polish and precision to the band’s attack it does start to feel a bit predictable by its conclusion.  The heavy metal influences prove to be somewhat subtle, with the bulk of The Dread March of Solemn Godscoming through with the familiar melodic black metal rise and fall of blasting into softer atmospherics and some acoustic interludes.  As a result, while there are some songs that reach some spine-chilling peaks, it can be hard to truly tell some of them apart over repeat listens and that’s where I still see some room for further refinement.

Vocalist K.R.N. has been with Ninkharsag since they became a full band, and his style has remained consistent over each of their releases.  His pitch is on the raspier side and the distortion of the screams is likely to generate comparisons to both Dissection and Bathory in equal capacity.  There are some passages on songs like “Lunar Hex; The Art of Mighty Lycanthropy” where some sung/chanted elements are incorporated into the mix which does add to the warriorlike cadence and atmosphere the rest of the band is able to create, but for the most part the performance leans heavily on the abrasiveness of the screams.  Considering the fullness of the instrumentation the vocals could’ve easily been washed out in the mix, but they’re able to consistently break through the denser layers throughout The Dread March of Solemn Gods and grab you by the throat.

It’s clear that Ninkharsag has spent this gap between albums really fine tuning their blend of melodic black metal to a razor sharp level of precision, and anyone who likes the bands mentioned elsewhere in this review are sure to find plenty to like here.  But even with the polish and that icy tonality that remains as appealing as ever, the songwriting doesn’t quite reach that classic level and the way that the band transitions between tempos leads to some similar sounding moments.  As a result, this is a solid effort sure to still grab fans of the genre but leaves me feeling as though the best is still to come from this group.  The Dread March of Solemn Gods is available from Vendetta Records.